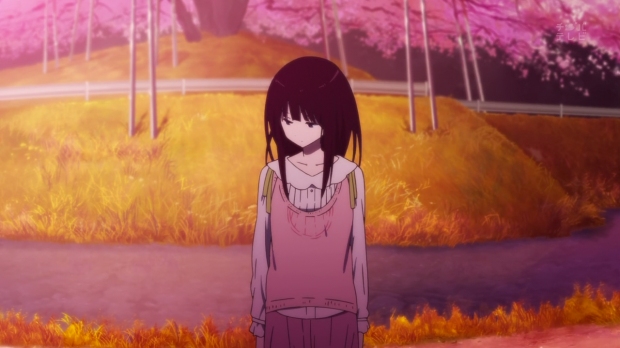 Then there’s a pair of us!

In an arrangement of extraordinary characters, like the cast of Hyouka, it’s easy to dismiss Eru Chitanda. This isn’t to say it’s particularly easy to overlook her – the series makes it a point to display her as the impetus for nearly all of the mysteries that the main cast is tasked with solving – however, it’s easy to push her aside once she has served her purpose as a catalyst.

A catalyst need not be a dynamic character. Their main purpose is to inspire other characters within the series to act, which doesn’t require them to undergo any sort of development. It’s often easier for the audience if they are static, as this allows for the changes that occur to the main protagonist to stand out all the more when the characters are placed side-by-side. For the majority of the Hyouka, this is what Eru appears to be.

When we are first introduced to Eru, she is very much a modern yamato nadeshiko. The daughter of a prominent family in town, Eru consistently receives high marks in school, and the series makes an effort, through both framing and the way she moves within the series, to show an innate grace. Satoshi Fukube frames her character for the audience during their introduction, acting impressed at Eru’s mere presence before launching into an explanation of the four most wealthy and well-known families of their town. Throughout Hyouka, her position as a representative of her family is reiterated constantly.

“Even if I go to a university, I’ll have to return to this place. No matter what road I take, my final destination will be this place. Right here . . . I’m not disappointed or sad that I have to return here. I have a job to fulfill as the daughter of the Chitanda family. I’ve thought about how to do that all my life.”

The argument can subsequently be made that Eru’s presence somewhat glorifies Japanese small-town values, but her resolve and resignation at the end of episode 22 say otherwise. Eru has an obligation to fulfill as the heiress of the Chitanda family, and it’s one that she accepts wholeheartedly, but not enthusiastically. She says that she isn’t saddened by her inability to leave the town of her birth; however, Hyouka makes it a point to display that she’s not happy about it either. Her uncle’s legacy that there may come a time where she would want to say something but would be unable to somewhat frames her actions within the series. Eru’s position simply is what it is, and she accepts it continuing to be a dutiful daughter in the eyes of both Houtarou and the viewing audience.

Eru manages to escape from her duties, albeit briefly, through her participation in the Classics Club, and her insatiable curiosity. Her innate thirst for knowledge about how or why things happen is a key character trait that lies outside of her yamato nadeshiko archetype. She loses her poise when she becomes emotionally invested in even the most mundane of occurrences, and is all the more interesting for it. Eru is the one in the group of four who recognizes others’ emotions above all (first with her uncle, then with Hongou in the movie arc, and again in episode 22 with Konari’s son), and her emotional investment frames why we, or the characters within the series, should care. As Cuchlann says here at Super Fanicom BS-X, Hyouka reiterates that mysteries can be completely circular entities without meaning other than the ones that are assigned to mystery within the context of the mystery itself. Representing the emotional component of the series, Eru plays the largest role in assigning each mystery meaning, even beyond her own, “I’m curious!” catchphrase, as she shows herself to genuinely care about others. Although the protagonist of Hyouka, Houtarou Oreki, may be unable to understand why Eru cares so much, her excitement is enough to propel him forward, allowing him to slowly recognize things about himself and the world around him that he otherwise would not have been able, or cared, to see.

The series’ primary and most obvious character narrative is concerned with drawing Houtarou out of his shell, and for that, Hyouka relies heavily on Eru as both a catalyst, and an emotional frame. However, returning to the progression of Eru herself, does this additionally mean that she develops within the series as well? Although the series doesn’t require that she develops, it does show, through the book-ending of her introduction (as the daughter of the Chitanda family) and the series’ conclusion (of Eru wanting Houtarou to see the place that she will inevitably oversee) that Eru is able to accept her birthright far more easily thanks to her involvement in the Classics Club, and her relationship with Houtarou.

More on characterization in Hyouka:

The Niece of Manga at Gar Gar Stegosaurus: Day has an excellent character study of Mayaka Ibara.