There are a myriad of ways that one could apply Gatchaman Crowds‘ episode seven title, “Abjection,” to the series as a whole. I am going to focus specifically on Utsutsu, because of both her inherent power and emotional transformation.

Utsutsu is introduced to the viewer as a waifish, child-like girl in a bikini who only says, “I’m gloomy.” Due to her appearance and dreamy, child-like nature, Utsutsu could have certainly come off as a one note character (literally, thanks to the fact that she only speaks one phrase). However, she instead becomes the first side character, other than Rui, to receive emotional development thanks to the series’ treatment of her.

Her introduction is further worth noting specifically because of protagonist Hajime Ichinose’s first sentence to her. Instead of relying on the typical exclamation of “You’re so cute!” relegating Utsutsu, and her specific character design, to be judged by her physical appearance alone, Hajime first asks of her swimsuit and where she received it from. Although this is followed up with the previously mentioned “You’re so cute” line, the fact that Hajime doesn’t immediately place Utsutsu’s physical appearance as the primary focus is not only intrinsic to Hajime’s nature to look beyond whatever she is first presented with, but also informs the audience as to how we are supposed to view Utsutsu. It’s subtle but, like Hajime, we’re meant to see her beyond what we are initially presented with. 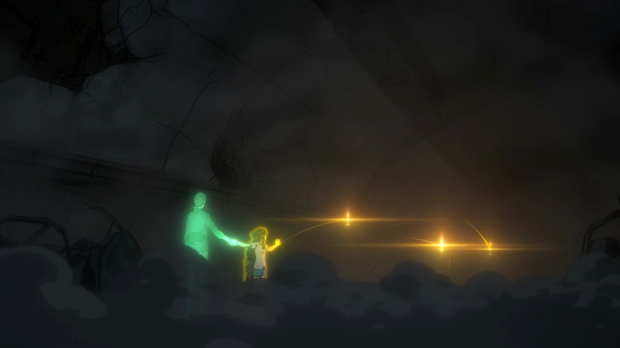 Most interesting is Utsutsu’s power. She is able to drain life from others with her right hand and give life to others with her left. This ability makes her wary of touching people, although she can additionally create copies of herself to avoid physically being present with others. Similarly to Hajime, she is very poor at communicating, although unlike Hajime, Utsutsu has seemingly given up on sharing herself with others. Her inner thoughts, momentarily laid bare in the conversation above thanks to Hajime’s insightful nature, are ones of great self-loathing and revulsion. As a result of her inherent powers, Utsutsu sees herself as monstrous, unworthy and unwilling to touch other people.

Abjection, specifically in art, involves the horror that occurs when one is forced to examine the abject: taboo or socially-rejected pieces of one’s self and/or others. This confrontation often leads to a fascination with physical means of casting off, including waste, blood, saliva, or corpses, among other things. Simply put: Utsutsu’s power doesn’t have a correct place within any social or cultural order. She can create corpses with one hand and resurrect them with her other – additionally, she can create what appear to be flesh and blood copies of herself – which are acts that most societies and cultures cannot reconcile themselves with, especially bringing the dead back to life.

So, what should become of Utsutsu, a being with no understandable place in the social order?

According to Hajime, nothing. Utsutsu is Utsutsu just as she herself is Hajime and even Berg Kattse is Berg Kattse. By ignoring what society would assign to Utsutsu, Hajime finally begins to break through her emotional barrier, inspiring Utsutsu to show genuine affection towards both humanity and her close friends. The new phrases of “I want to save them!” and “I want to help!” join her previously gloomy vocabulary. Hajime’s method of confronting the abject is to instead confront the social order that casts it off in the first place, similar to how she shuts off her cell phone in the elevator, choosing to turn to Utsutsu in their present space.

“More importantly, we had a lot of fun today, Utsutsu!”