I’d like to introduce you to someone. His name is James Ramsay, and he’s six years old. All he wants, in this immediate moment, is to go on a sailing trip to a nearby lighthouse. He thinks happily of the possibility of going the next day as he cuts out pictures from magazines, while his mother reassures him that they will be able to go. Then his father cuts in, saying that the weather will most likely not permit the trip. James immediately feels flashes of murderous rage towards his father, and imagines stabbing him with the scissors that he holds in his hands.

I’ll let you in on a little secret. When I see people stopping in a rotary when they have the right of way, it makes me want to throw things. When my neighbors neglected to fully shovel out their parking spots following a snowstorm, allowing large piles of ice to build up in their now un-parkable spaces while they took my fully-shoveled spot, I wanted to shovel ice onto their cars, or throw snow at them. But did I actually do these things? No. Just as James Ramsay does not stab his father with scissors, and just as I did not throw things at my neighbors, we all make choices like this each and every day, allowing the first visceral reaction to crash over us like a wave before proceeding forward and, hopefully, leaving most of it behind.

However, interesting things occur when one removes that logical filter that keeps us from raging at, throwing things at, or generally being horrid to others. It is here, where Gatchaman Crowds‘ Berg Katze makes his home, in our “black hearts.”

It is also here where communication on the internet takes place.

It has often been argued that anonymity is the cornerstone of irrational behavior on the internet. Suddenly, as people become numbers, avatars, or handles, they become bolder in their aggression. The internet becomes a place where they can blow off steam by raging at others. However, as a growing number of people are now communicating with Facebook or other social media where their actual given name and personal information are on display, this puts this claim in doubt.

Last year, I began playing an online video game called League of Legends. Some of the more interesting things that I have found while playing this game – aside from various strategies and team compositions – have been the scientific studies done by Dr. Jeffrey “Lyte” Lin and the Riot Games player behavior team regarding so-called “toxic players.” One of the first things to catch my attention was the idea that it’s not anonymity that removes the filter between the visceral and the rational reaction, but instead a lack of accountability. It’s one thing to tell me to uninstall my life for overextending in game without vision coverage, but something completely different if you’re saying it to my face and watching my reaction. In Leage of Legends I’m just another random name, and another random, faceless player that you happen to have queued up with. If you rage at me, what happens? The actual consequences don’t directly involve you getting your comeuppance for telling me that my mother should die of cancer in all chat, and you may not even associate the in-game consequence – of me and possibly others playing worse than we had been previously – with our eventual loss.

“If we remove all toxic players from the game, do we solve the player behavior problem?”

The answer to the question posed above is a resounding, “No.” with the problem rooted in how we instantly react to things emotionally, and how our own personal contexts play a key role in how we conduct ourselves online. One cannot remove all toxic players from League of Legends, just as Rui Ninomiya cannot remove all toxic people from Galax, or the internet at large cannot be purged of all trolls. Others have pointed at Hajime Ichinose’s instructing Rui to simply turn his phone off as an inefficient band-aid that masks the larger injury underneath. I disagree with this, as Gatchaman Crowds also makes it a point to show Hajime later on admitting that there are some things that you can’t turn off; that there’s a difference between calling her a “fat, ugly, bitch” on social media networks, and the painfully human emotions behind the actions of CROWDS. Hajime’s strength is her boundless optimism, but it’s not a blind optimism. Her love of others involves her acceptance of their own personal contexts, as she had previously told Sugune Tachibana.

“Either way, he shouldn’t have driven so fast on the road!”

“But he may have been driving a sick person. Or maybe his wife went into sudden labor?

“Why do you bother thinking about things like that?”

“When you think about it that way, don’t you feel like they had a valid reason?”

The internet not only makes it easier for one to assume a different name under an avatar, or disassociate consequences from our actions, but it also makes it even simpler to disregard others’ personal contexts, which makes it the perfect tool for Berg Katze in his mission to turn humanity against itself. Hajime’s counter is equally brilliant: to not only unmask the superhero by revealing the G-Crew, but to unmask those on social media who would have access to GALAX and CROWDS. This begins with Rui’s unmasking and public apology as no one but himself. 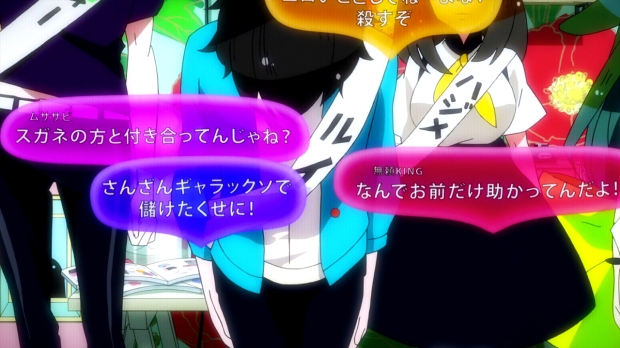