There’s something a bit off about Mako Mankanshoku.

The universe of Kill la Kill takes care in setting its presentation as a stage. Everything appears, six episodes into the performance, to follow a set script. Due to the death of her father, Ryuko Matoi is given a reason for arriving on the stage of Honnouji Academy, and her entrance additionally provides her the means, through Senketsu, to discover what she wants to know. To uncover her father’s mysterious past and the truth behind his demise, she must go through a series of weekly challenges by battling various members of the student body. If this sounds vaguely familiar, then you may have watched Revolutionary Girl Utena, which Kill la Kill is both influenced by and refers to directly. In turn, Revolutionary Girl Utena borrows heavily from classical theater and The Takarazuka Revue (a Japanese, all-female, performance troupe) in both visual presentation and direction. One of the more obvious theatrical elements present in Revolutionary Girl Utena is the inclusion of a Greek chorus in the form of the Shadow Girls, who appear once an episode to act out a parable through silhouettes and shadows.

Originating in ancient Greece, Greek choruses consisted of between 12 and 50 members, depending on the playwright and type of performance. They were made up of what the average audience member presumably looked like, and stood on the orchestra – the circular main stage of Greek theaters – along with the principal actors. Choruses were tasked with providing a simulated audience response by commenting on themes while also revealing choice inner thoughts and desires of the main characters to further inform the audience without forcing the actors to break character.

The stories that the Shadow Girls tell do not fit directly into the plot, but make commentary on thematic elements within that episode, or the story arc as a whole. Towards the end of the series, they are revealed to be ordinary students who also attend Ohtori Academy, along with heroine Utena Tenjou. Director Kunihiko Ikuhara would revisit the Greek chorus in Mawaru Penguindrum through train placards of in-universe idol group Double H. Each sign displayed would carry with it an ancillary message to themes that the series presented. The actresses in both series, the Shadow Girls and Double H respectively, presented their scenes through melodramatic gestures, pantomime and, in the case of the former, shadow puppetry. 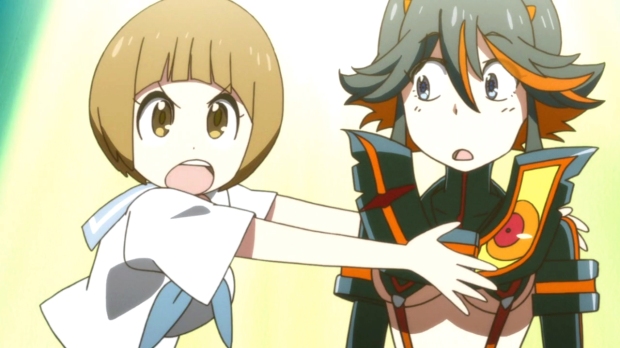 Mako Mankanshoku is clothed as an average student of Honnouji Academy, much like the Shadow Girls of Revolutionary Girl Utena, or the average audience member in ancient Greek theater. She is not an elite – her father is a back alley doctor in the slums – and is representative of the average Honnouji citizen, lorded over by Satsuki Kiryuin and the Kiryuin Family. At first, Mako is primarily used as a punching bag, or thrust in roles where she plays the victim so that Ryuko will swoop in and save her. However, Mako also gives a speech each episode that occurs completely off the stage of Honnouji. Heralded by the Hallelujah Chorus from Handel’s Messiah and the sound of a light switch, Mako interrupts the story to impart her words of wisdom bathed in a spotlight. Additionally, she arrives in the same pose, before launching into a tangentially-related rant. These tirades bring all action to a screeching halt, with Mako giving someone a thorough dressing-down – in episode five, for example, Mako lectures the intimidating Tsumugu Kinagase about picking on Ryuko and Senketsu, saying that he needs to understand how the poor treat their only set of clothing – using melodramatic gestures, pantomime, multiplication, and anime references to get her point across. 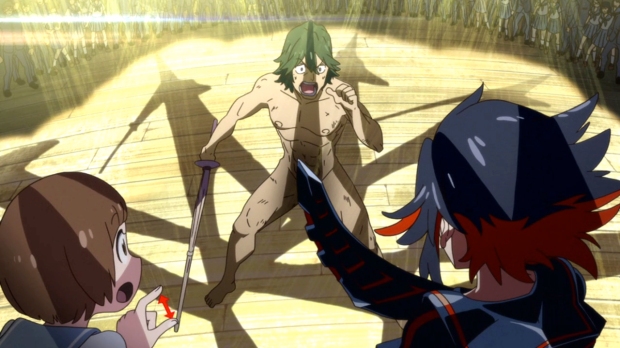 As early as Kill la Kill‘s second episode, Mako has been telling us, the audience, additional information (pictured above) while also informing characters within the series. She may not be a true Greek chorus, like the Shadow Girls, but her role as an interruption to the scene is both fascinating to the narrative and hilarious. I find myself looking forward to each episode simply to see what wacky show Mako has in store for us that week. Episode six handed Ryuko her first significant defeat in going up against Uzu Sanageyama, a member of the Elite Four, and you know what was missing? A certified Mako rant. There’s definitely something a bit off about Mako Mankanshoku, and I love it.