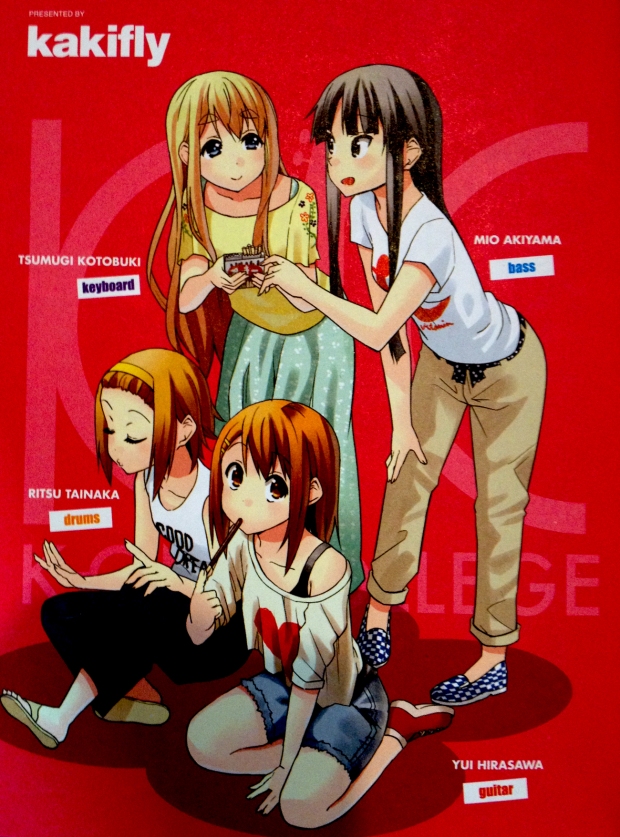 “Really gives you that ‘new life’ feeling, doesn’t it?”

-Mio Akiyama to Ritsu Tainaka on waking up to their first day of college, K-ON! College, page 4

An odd social experiment was conducted in my third year of college. Notorious for its faulty internet services – registering for classes became an all-day activity beginning at 5:00a.m. involving constant browser refreshing and oceans of tears – the servers experienced a significant crash for the first two months of the 2004 autumn semester. I was on the school newspaper staff at the time, and one of the more interesting articles written on the subject involved the social effect on incoming freshman that year. Past classes of wide-eyed, confused, and lonely first-years had relied on the likes of AIM or other varied internet messaging systems to stay in touch with their high school friends, as cell phones were not nearly as ubiquitous as they are now. These options were not available to what would become the graduating class of 2008, and their safety net of existing friends and family was further from reach than it had been for previous classes.

Unlike most first-years, the four original leading ladies of K-ON! – Yui Hirasawa, Mio Akiyama, Tsumugi “Mugi” Kotobuki, and Ritsu Tainaka – conveniently end up at the same college following their high school graduation. This means that their safety net is already in place. The first few pages of the K-ON! College manga read like another day at Sakuragoaka Girls High School, replacing Mio’s pleas to practice music with pleas to wake up on time for classes. While it’s familiar and homey, it also rings a bit false.

What the aforementioned class of 2008 at my alma mater ended up doing was nothing more than venturing out and getting to know each other. Obviously, this happens with other incoming classes as well, roaming the hallways in packs made up of students within relative proximity until the uncomfortable first semester passed, with everyone sorting themselves into various groups depending on hobbies, interests, or programs of study. In previous classes, the availability of friends from home slowed down the first-years’ progress in branching out and making new friends. However, with the class of 2008, the lack of a safety net forced people to get to know one another far more quickly. They held impromptu jam sessions in the hallways of the first-year dormitories, actually attended their Resident Assistants’ programs, and became the most tight-knit class of the four I knew, including my own.

I could point to the fact that attending the same college as three of your four closest high school friends is unrealistic, and this is why the opening of K-ON! College seems so uncanny. Yui et al. are the exact opposite of the class of  2008, as they enter college with their high school best friends in tow. However, the reason why I fell in love with K-ON! was certainly not because the plot was realistic, but because the development and relationships between the characters were emotionally resonant. In spite of an obvious detachment from “the real world” in terms of circumstance, the growing friendships between all five members of the Light Music Club were always fun to drop in on for an episode a week, or a page or two of the manga. As a viewer, I felt oddly included in the group, privy to the same amount of friendship that Yui, Mio, Mugi, Ritsu, and Azusa shared with each other. Their graduation and subsequent migration to higher education signals a change in perspective from a viewing standpoint. Had I only stopped at the anime series’ end, or the fourth volume of manga, I suppose that I would feel differently, as the girls’ lives would be left up to my imagination.

“Then, if we stay together, we’ll be immortal!”

A similar series that plays with the idea of graduation is Yuyushiki. Leads Yui Ichii, Yuzuko Nanohara, and Yukari Hinata are often shown musing about their futures, and the animated telling of their story deliberately chooses to have the most heady of these discussions in its penultimate episode rather than its finale. This decision leaves the viewer longing to see more, but satisfied in seeing the trio cavort as usual before the end of summer vacation. This final episode ends like the series began, with Yui donning her uniform, meeting with Yuzuko, and Yukari, and the three head off to school together. Following Yukari’s logic, quoted above, as they exit our screens together, they are immortal. Their in-universe graduation is implied, unlike K-ON!‘s emotionally-charged event, and it will occur off-screen, when it does occur. Similarly, there is a second graduation, separating us from Yui, Yuzuko, and Yukari in the event of the series’ completion.

It’s not that K-ON! has overstayed its welcome as it transitions from high school to higher education, but that in giving the girls their safety net in each other while also introducing new characters, it attempts to move on while staying the same, sacrificing a bit of emotional resonance in the process. Perhaps the four could have used a disruption, separating them from one another. It worked for the class of 2008.

Related: One, Two, and Yuzuko Makes Three in the Fifth Episode of Yuyushiki