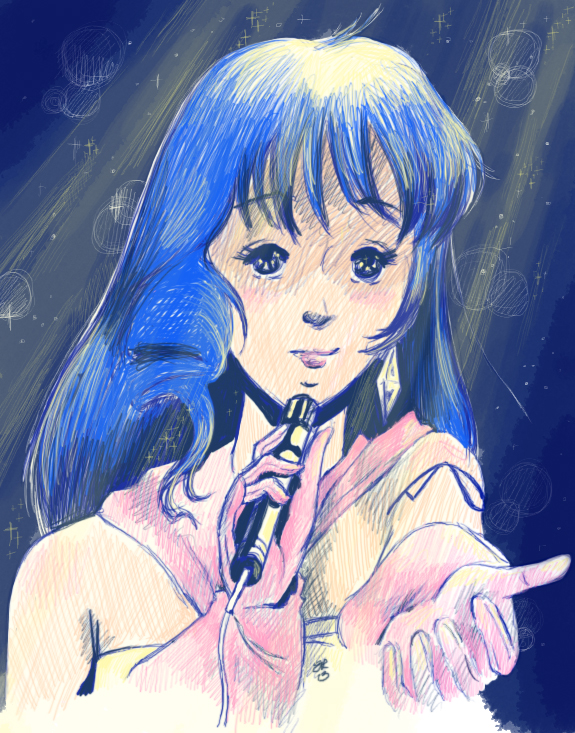 “You know This is something I have trouble getting people to understand in magazine interviews. For example, you’ve got World War II, and then you have lots of movies based on that event, right? They are all fictional. They’re all based on a war that actually took place, but they are all different. For example, in period dramas you have Oda Nobunaga and Tokugawa Ieyasu, but there are so many Oda Nobunagas and Tokugawa Ieyasus. The producers look at the real event and adapt the character according to their wishes. The actors and lines also change, so the character changes.”

-Shoji Kawamori in a 1998 interview

When I came across this post, which included a link and quotes from the interview cited above, I had seen very little of Macross. Prior to this, the only Macross property I had seen was the movie Do You Remember Love?. It was at that time, and still remains, one of my favorite animated films of all time. As I had only a small amount of familiarity with the franchise as a whole, this concept of a continuous retelling of a history intrigued me rather than repulsed. After all, I had no existing idea of what Macross was. I only had Do You Remember Love? where Lynn Minmay was charming and sympathetic, an ancient love song won a war, and I couldn’t understand why everyone hated Lynn Kaifun.

Fans’ annoyance with Kawamori’s statements is understandable. He’s washing his hands of having to adhere to any continuity by saying, “They’re all different views on a historical event! Each character in Macross is actually an actor/actress playing a role!” It’s the opposite of being completely overbearing, and exercising control over every last detail of your series, leaving fans with no room for interpretation (hullo, J.K. Rowling), but only a slight step removed from, “And it was all a dream!”

Yet, a piece of me was completely charmed by this idea of an event in the Macross history being told, and retold, through generations. When I watch a series, I don’t want to be told how to watch it by the creator, and Kawamori’s hands-off approach was easy for me to swallow. I liked the idea of the same basic narrative being told in a myriad of different ways. This past year, I began to make my way through the Macross that wasn’t Do You Remember Love? beginning with the OVA series Macross Plus. This was quickly followed by Macross Frontier (both the television series and the movies), and lastly, the original Super Dimension Fortress Macross.

SDF Macross solidified what Macross was to me, along with a greater appreciation for the so-called “original story.” However, what makes Macross, Macross, to me, is not why I love SDF Macross. If someone were to ask me, “Which Macross property exemplifies what Macross is?” I would point them immediately to Do You Remember Love? as a distilled, undiluted drop of pure Macross. SDF Macross reaches its emotional peak in episode 27. The Earth is scorched, Hikaru Ichijou finds Misa Hayase on the surface, and while the two wonder if they’re the only survivors left, the Macross appears, with Minmay’s “Beautiful Place in My Heart.” washing over the two as they realize that the Macross has also survived. Joyfully, the two board Hikaru’s valkyrie and go to meet up with the others. The series could have ended here – with episode 27 having the similar, hopeful, message of Do You Remember Love? – but it doesn’t. Instead, SDF Macross shows the slog of reconstruction (and to some extent, cultural domination, although it refrains from fully painting our leads in the worst light) that occurs following a war.

At the end of the triangle, Minmay, Misa, and Hikaru all make the most selfish choices to fulfill their own personal desires and whims, and it’s their collective selfishness that inspires my love for SDF Macross. Watching as the series attempts to resolve the emotional messes of its three main characters is exhausting, and I love that.

As an aside, this is the first in a series of twelve entries about my favorite moments of anime I watched this past year. There will be one of these posts every day until December 25th. Enjoy!