One of the more interesting topics discussed in my high school health class – among the usual suspects of sexually transmitted diseases and the required viewing of the birth of a child – was the “placebo effect” and its relationship with alcohol consumption.

First coined by T.C. Graves in 1920, but studied far earlier in the 18th century by physicians and pharmacists, the effect describes the alleviation of whatever symptoms a patient may have without receiving any actual medicinal treatment while believing that they have. The belief is important – “placebo” comes from the Latin “I will please” – as the results depend on the patient’s conviction more than the treatment itself. By definition, it is a medicine that pleases the patient more than it benefits them. With alcohol consumption, the placebo can be used to display the expectancy of the effects of alcohol without actually having consumed it. In other words, if I expect to be drunk and know the typical actions of one who is drunk, then I will display those actions when I believe myself to be drunk, regardless of the amount of alcohol I have, or have not, consumed.

This varies from person to person, and there are variances in expectancy based on type of alcohol along with many other personal factors (i.e. people who have the same blood alcohol content can behave in drastically different ways). Additionally, this is not to take away from the fact that alcohol is a depressant and has specific psychoactive effects. However, the idea that intrigued me the most in high school, and continues to pique my interest to this day, was the idea that if one wants to be drunk, then they will be. 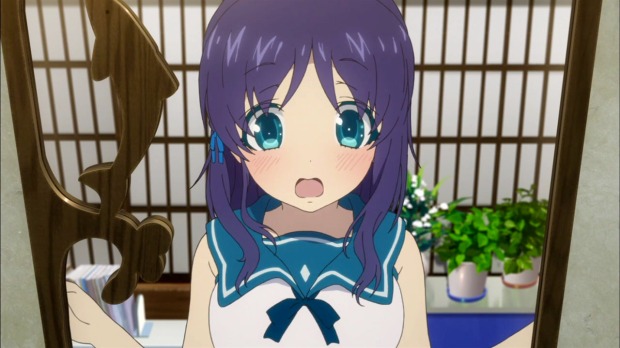 Chisaki Hiradaira desperately wants to be drunk. She has deliberately stunted her own emotional growth in an attempt to both preserve her love for Hikari Sakishima, and force herself to hibernate like the rest of her friends and family of Shioshishio in stasis beneath the sea. Her body continues to grow; however, she refuses to move forward emotionally. As her friends, including Hikari, wake and appear on the surface looking exactly the same as the day they went to sleep, Chisaki continues to stubbornly hold herself back.

Episode 19 of Nagi no Asukara shows Chisaki unable to stop herself from feeling any longer, thanks in large part to Manaka Mukaido’s return to the surface. In spite of the fact that Manaka refuses to wake, her presence provides the last bit of pressure to crack Chisaki’s mask. Chisaki wears many different outfits in this episode and none of them seem to fit her. Her old Nami High uniform is too small to be comfortable, and she has yet to grow into her nurse’s outfit. Despondent that her only option is to embrace her older self and more forward, Chisaki attempts to drown her sorrows in alcohol. 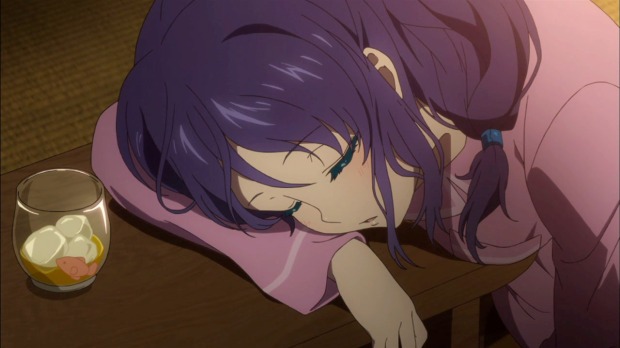 “You probably do lose a lot, but that just means you need to fill what you lost with new things.”

-Tsumugu Kihara to Chisaki Hiradaira on becoming an adult, Nagi no Asukara, episode 19

The “alcohol” that Chisaki consumes is not actually alcohol but plum juice. However, she believes it to be alcohol and displays the symptoms of one who has imbibed too much, while Tsumugu knowingly watches over her and coaches her through her own feelings. One of the last things that Chisaki thinks to herself before passing out is that she wants to return to Shioshishio. The next morning, before embarking on her journey, she remarks on how she doesn’t have a hangover, which allows her to think that she may be stronger than she had previously thought.

Chisaki is stronger than she gives herself credit for, but the lack of a hangover is hardly indicative of this fact. Instead, becoming “drunk” without fully experiencing the physical aftereffects allows her to finally believe in her own strength. She expected to be drunk and therefore was. In spite of the fact that it was only a placebo, the event serves as enough of a salve for her wounds. Chisaki will now be able to fill her life with new things equally, if not more so, emotionally affecting than alcohol, like the rekindling of an old love, now on her terms.