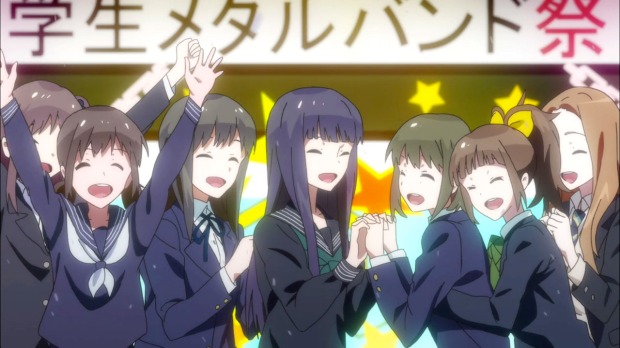 Considering the three options above, Airi Hayashida is most successful in making those around her happy. She is the least naturally-talented, admitting in her audition paperwork that she has never sung nor danced before, and wants to become an idol to improve her confidence. Airi is two red hair ribbons away from being Haruka Amami (The Idolm@ster) with Wake Up, Girls! treating her inner demons with genuine care. We knew that Airi would not quit, and that the group would somehow find a way to both keep her as a member and stay together under Tasuku Hayasaka’s tutelage; however, the nuance with which Wake Up, Girls! presents her situation allows the series to shine above its other idol brethren.

“Even I-1 Club was built by the passion of Shiraki, who had nothing going for him except his love of idols.”

Most importantly, Wake Up, Girls! continues to impressively paint the narrative of its titular group in shades of grey. Aside from the group’s brief stint under the gangster caricature of a producer in episode two, the series has no clear-cut villains. Idol powerhouse I-1 Club’s Tooru Shiraki is no cardboard cutout of a bad guy, as President Tange states above. The series has painted him as ruthless, leading I-1 Club with a bullhorn and the affirmation, “Don’t rest! Don’t complain! Don’t think!” however, it’s easy to see what motivates him, and his sweeping ambition to always be the the best is understandable.

Shiraki’s current methods may be suspect, but they have brought him to where he is now, a place that President Tange admittedly wants to be herself. In spite of her somewhat motherly attitude towards the group as of late, she is still the woman who ran off with Green Leaves’ money, and left Wake Up, Girls! high and dry before her inspiring fistfight and reappearance in episode two. Musing over Shiraki’s success with I-1 Club, she admits that his idol empire was built on honest, hard work.

If there is anything that idol anime series love the most, it’s highlighting that being an idol requires sacrifice and hard work. Perhaps this is to assuage audience guilt in supporting an industry with its fair share of dubious practices while continuing to market to them. Perhaps this is to appeal to young girls who would want to become idols (Aikatsu! specifically comes to mind, as it is the one idol series I know of that is actually marketed to that audience). Or perhaps it really is to draw attention to the sheer amount of effort and dedication that it takes to become a successful idol. Regardless of the reason, this outlook breeds a genuine relationship between the viewing audience and their cartoon idols. Although I may take issue with many aspects of the idol industry, I want Wake Up, Girls! to succeed because I’ve grown to care for them. 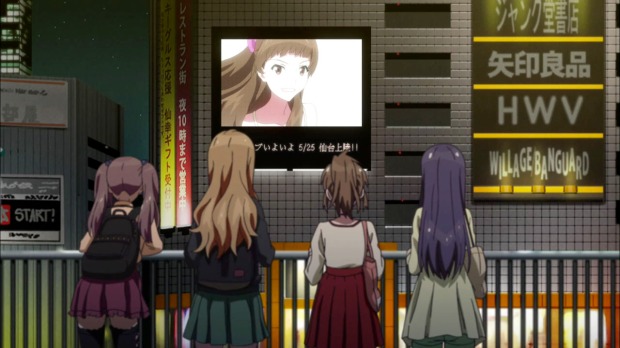 Circling back to Airi’s conundrum, Hayasaka has told her that she simply cannot cut it in the ruthless world of idoldom. He is not wrong when he says that Airi is very far behind her group counterparts. His assessment of her talent level, blunt as it may be, is also not wrong. As a singer and a dancer, she has the least amount of natural talent out of anyone in the group. Where Hayasaka misses the mark is in saying that Wake Up, Girls! does not need Airi as a member. As a new group formed solely by President Tange for the purpose of eventually making money, the girls were thrown together overnight with varying talent levels, attitudes, and sources of motivation. Airi is a person who makes those around her happy, making her an invaluable piece of Wake Up, Girls!

Wake Up, Girls! challenges the notion that becoming a successful idol automatically means pitting girls within the same group against one another. When de-facto leader Yoshino “Yoppi” Nanase says the typical, “We’re not here to make friends, we’re here to be idols” line, Mayu responds with the quote above. Having been a part of I-1 Club in the past, her opinion is invaluable to the group, changing Yoppi’s mind and inspiring all of the girls to find a way to keep Hayasaka from firing Airi or disbanding the entire group. After all, it was Airi who inspired Mayu to consider why she had wanted to become an idol in the first place. Additionally, if Mayu had to settle on one of the three ways to make people happy – in spite of various characters within the series attempting to assign her to the first: one who makes those throughout the world happy – it would be the third option, making herself happy. Airi is most likely the only person who understands this about Mayu.

In choosing to reject both options placed in front of them and seek out a third – the third being stay together as a group with Airi – the girls don’t do anything unpredictable or unexpected. Obviously the series was going to find some way for them to stay together as seven. In spite of being a vehicle for money (in the eyes of President Tange) and a Pygmalion-style artistic challenge (in the eyes of Tasaku Hayasaka) their determination to stay together is affecting. They become a group for their own sake, as well as others.