When Reina Kousaka needs to express her emotions, she plays her trumpet. When that doesn’t work, she screams.

The battle lines, so to speak, of Sound! Euphonium have been drawn. As Aoi Saitou had predicted in the series’ second episode, it’s a war between having fun and aiming to be the best. Framing this are her words that three years, specifically the three years of high school, pass by in an instant. From Euphonium‘s opening sequence, it’s apparent that Kumiko Oumae already struggles with identifying which side she is on.

“I’m so upset I could die. Why are people happy when we didn’t even make it?”

When Kumiko and Reina’s junior high school concert band wins the gold medal but fails to make it to Nationals, Kumiko mistakes Reina’s tears of anger for tears of joy. It’s an important scene that sets the tone for the entire series, and additionally establishes their respective characters from the beginning. Aside from the obvious awkwardness and Kumiko pratfalls as she tries to talk to Reina in episode two, Euphonium also uses this to establish just how inwardly-focused Kumiko is, and how uncomfortable she is with emotional outbursts. 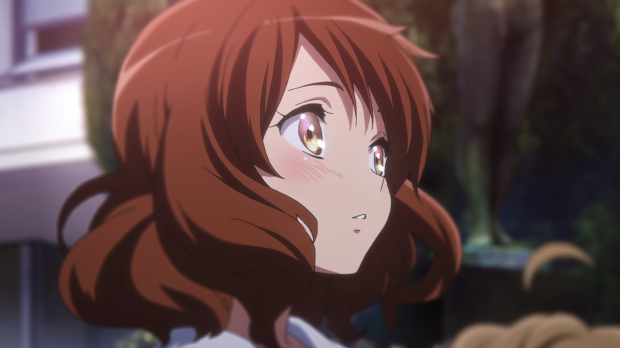 Forever muted in her responses, Kumiko finds it difficult to express her own strong emotions, never mind deal with the expressions of others. She doesn’t raise her hand in favor of going to Nationals, but she doesn’t raise her hand in favor of having fun either. She finds Reina difficult to deal with because Reina is so intensely focused, and wears her emotions openly. She can’t bring herself to stand up to her sister, but she doesn’t fully shrink away from her either, leaving a yawning chasm between the two of them. Yet, as soon as Reina begins to play an excerpt from the second movement of Dvorak’s New World Symphony, Kumiko knows exactly who is playing, and additionally, the emotional history behind the piece. In this manner, her true feelings are briefly revealed.

Sound! Euphonium‘s opening sequence is reminiscent of a similar situation in the manga Aozora Yell when Shirato High School’s brass band wins a gold medal, but fails to make Nationals. Protagonist Tsubasa Ono couldn’t be more different from Euphonium‘s Kumiko, as she wears her heart on her sleeve and is crushed when her seniors are unable to compete at a national level. This isn’t the first time Shirato has faltered, and their band motto of “With all one’s might!” was a message from the former seniors who failed to the current students. Tsubasa herself is a poor trumpet player. She attends Shirato with the purpose of joining the brass band, inspired by a performance that she witnessed, but finds herself woefully behind her peers. Doggedly working her way towards being a better player, she begins to exemplify the Shirato affirmation, even though she is far from the best in her section. As her teacher explains, it’s not necessarily about winning, but ensuring that the band is doing things wholeheartedly, leaving no room for doubt.

The same teacher promises to take Shirato High School to Nationals after witnessing the dedication of Tsubasa and her fellow first-year students. She is a harsh disciplinarian and taskmaster, constantly on top of her students in brutal fashion, and a complete foil to Euphonium‘s Noboru Taki, who rules far more indirectly.

Inheriting a concert band rife with internal issues, Taki’s hands-off approach is interesting, and goes a long way in pointing out how entitled many of the students at Kitauji High School feel about their performance. The previous year they went through the motions, performed mediocrely in competitions, and did not meet their goal of making it to Nationals. The majority of second-year students that were fiercely determined left the band because of this lack of dedication. Euphonium makes it apparent that many of the leftover second years not only don’t want to practice, but feel entitled to enter competitions, as they bristle at Taki’s suggestion that Kitauji not enter a competition until they can perform better.

“It’s ‘From the New World.’ I heard Dvorak wrote it while he was in the U.S., thinking of his homeland of Bohemia in a barren, brand new world.”

Unable to deal with the infighting, Reina expresses herself in the best way that she can, by playing her trumpet. While Kumiko struggles to speak with Reina, and is unable to communicate her own feelings as concisely, she immediately resonates with Reina’s music. There are similar instances of this in Aozora Yell as well. When Tsubasa is rejected by the boy she likes, her peers wordlessly play a song for her. And when Tsubasa witnesses the dejected look on the baseball players’ faces after a loss, she alone stands up and plays for them, even when it gets her in trouble afterwards. In both series, these expressions reiterate the idea that one must leave everything on the table, specifically through one’s music.

Most importantly, having fun and aiming seriously for a goal are not mutually exclusive. It’s a battle line that doesn’t necessarily need to be drawn. Aozora Yell knows this, and Sound! Euphonium is surely headed in that direction, into a new world for Kumiko and all involved.