“Beautiful. So beautiful, it just makes me swoon. The most beautiful part about it is that the answer is zero. That said, someone like me thinks that if the answer is going to be zero, there’s really no need to go out of your way to make the calculation.”

A locked room mystery plays on the idea of the impossible. The crime scene is isolated with a set amount of variables: a vanished culprit, and information given to both the detective and the reader of that respective work. In a way, a locked room mystery is an equation or a formula. After a while, the reader learns what to expect and when, eagerly anticipating the detective’s incoming speech. This subgenre of detective fiction is responsible for some of the most famous, influential, and bestselling works of all mystery novels, most notably John Dickson Carr’s The Hollow Man and Agatha Christie’s And Then There Were None.

The insatiable appetite humanity seems to have for these types of mysteries is intrinsically tied to human nature itself. When presented with a seemingly insolvable situation, we crave rationality and an explanation.

Ougi Oshino knows this, and plays on this idea in the first episode of Owarimonogatari, going as far as to begin the revelation of her deductive process with the trademark, “I’ve gathered you all here today.”

Only there is no all, there’s only one: Koyomi Araragi. And Araragi already knows the answer to this mystery. The question is then of why Ougi finds it important to investigate this particular piece of Araragi’s past. 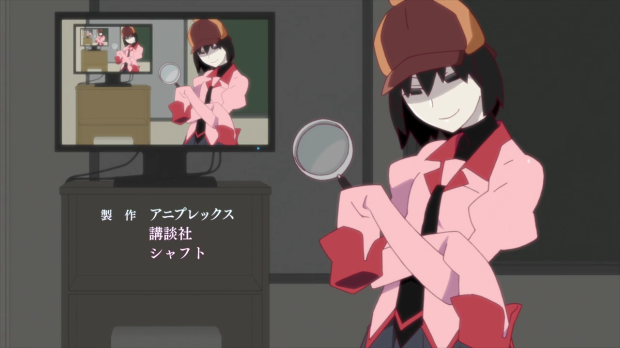 Monogatari as a franchise follows a specific formula for the majority of its narrative arcs. An oddity appears around a beautiful girl close to Araragi in either physical proximity or emotional attachment. Araragi cannot resist his desire to help. A solution is reached, all-too-often thanks to Araragi’s interference.

This begins to change in Monogatari Second Season, where as early as Tsubasa Tiger, the afflicted party is the one who ultimately decides how the oddity is banished or how the problem is solved. At the end of Second Season, Nadeko Sengoku’s resolution is one that requires Araragi not to interfere, and his presence is further sidelined in Tsukimonogatari when Yotsugi Ononoki acts on her own in service of teaching him a valuable lesson. Throughout, these problems, questions, and answers have always been about the afflicted, but never Araragi himself. We are shown that he’s helpful and at times self-loathing or masochistic but these are on a very surface level, if they are developed at all. The formula never requires much characterization for Araragi, relying on him as a sounding board for the other parties in the series.

Throughout all of this, there’s not a lot of room for a standard detective fiction setup. In fact, one could make the argument that introducing one would be a terrible idea as oddities not only exist but are the narrative thrust of various Monogatari arcs. If the answer to “what” or “who” is always an oddity, the answer comes all too easily and the puzzle to be solved is then of the affected character themselves rather than their sequence of events.

Yet, in Owarimonogatari, the locked room setup works wonderfully well. The enigmatic Ougi Oshino presides over everything as Araragi takes his turn at the center of the emotional narrative. Even with this new setup, importance is placed not on the mystery itself but how its resoluation affected Araragi so deeply as a person. The oddity is of little to no significance because it only serves as a device to create a situation requiring Araragi to remember his own past. Since the answer cannot be written off by an oddity’s mere existence, and banishing said supernatural being necessitates solving the mystery of Araragi’s classmates, it cannot affect the outcome.

Most importantly is the fact that a bit more of Araragi’s true nature, or the building blocks towards his initial anti-social persona, are revealed. He’s lived a formulaic life for most of Monogatari, solving the mysteries of oddities, but it’s people who have left the deepest scar on his psyche. There’s initially no way out of a locked room murder, but the result must come about in a logical and thoughtful fashion in the continued, somewhat futile, effort to make sense of strange events or apply reason to something that initially appears unreasonable. Here, the viewer sees Araragi confronted with his own past and how he felt betrayed by not only his classmates but an authority figure. The sequence of events is presented in brutal fashion through Ougi’s pointed questions.

Ultimately, Nisio Isin, and the Monogatari franchise as a whole, is continually focused on discussing how one can come to embrace their own innermost fears or darkest desires. Araragi is now forced to step outside of his own comfortable formula and examine these things for himself, all with the trappings of one of the most tried and true formulas of detective fiction: the locked room mystery.