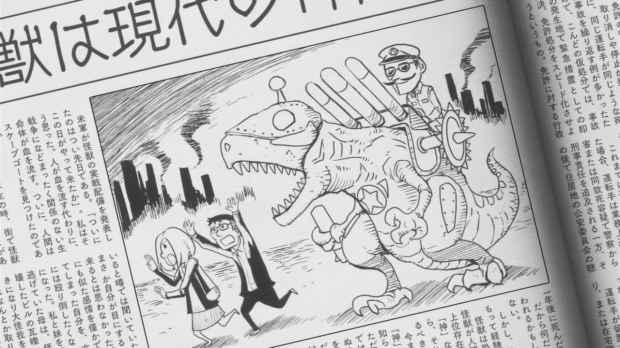 Present day journalism, advertising, and marketing has been forever altered by social media. Breaking news is found through Twitter updates while commentary is immediately broadcast from one’s fingertips into the ether on Facebook and Reddit, among other platforms. Previously, newspapers, radio, and television were the primary tools of broadcasting both breaking news and advertising goods and services with commentary reserved for the dining table, living room, or office water cooler. If you’re at all interested in the ramifications of the former, more immediate and current path for news and marketing, Gatchaman Crowds might be the series for you.

Instead of a social media focus, Concrete Revolutio‘s in-universe thoughts are filtered through an anachronistic setup that harkens back to these days of fedoras with “Press” and rows of desks with rotary phones visible through the haze of cigarette smoke. The Concrete Revolutio twist is that said phones are now flown to satellite girls by witches.

Many of the political machinations performed by varying parties in Concrete Revolutio rely heavily on traditional media. Additionally, the series continuously focuses on media impact during the tumultuous social times of post-war Japan.

A general timeline can be established from the definitely-not-Beatles concert at Budokan as shown in Episode 5. The actual concert took place in 1966 amidst protests from Japanese nationalists who disapproved of using the Nippon Budokan as a stage for a rock band instead of a martial arts tournament. Equating June 30, 41st of the Shinka Era (the date of the pseudo-Beatles concert in Concrete Revolutio) with June 30, 1966 (the actual date of the Beatles first concert at Budokan) reveals a timeline of approximately 1939 to 1973, or the 14th of the Shinka Era to the 48th of the Shinka Era. Some important dates remain the same – the aforementioned “Beatles” concert as a primary example – however, the war timelines notably diverge with the ambiguous war of Concrete Revolutio ending in the 19th of the Shinka Era (1944) when World War II ended in 1945. 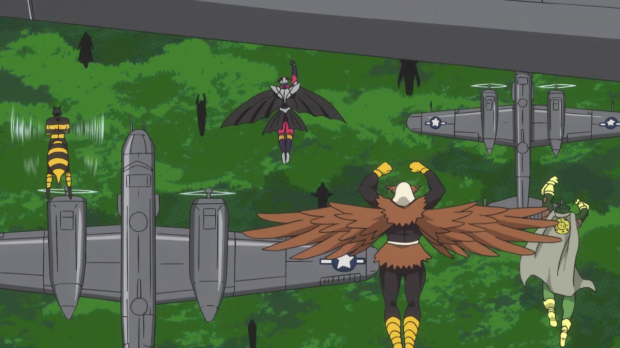 The piece of information most crucial towards piecing together the series’ media puzzle is that superhumans were once enlisted by the U.S. government to fight against the kaiju in the 17th of the Shinka Era (1942), and the initial discovery of Gigantopitecus Gigantus took place in the same year that real-life analogue World War II began; 1939 or the 14th of the Shinka Era.

Following the end of the war, superhumans mysteriously vanished from all forms of media. While the Superhuman Bureau works for the government – tracking and registering superhumans for supposed protection – superhumans are prohibited from mention in newspapers, radio programs, and remain a hush-hush subject even between friends. The question of why this is has yet to be answered, and the only comparable analogue comes from the U.S. occupation of Japan after the latter’s surrender in 1945. An important part of the new Japanese constitution was supposedly the freedom of speech; however, Japanese media were allowed very little leeway in what they could and could not say thanks to the Supreme Commander for the Allied Powers (SCAP), U.S. General Douglas McArthur.

War propaganda played a large role in the Japanese war machine, continuously rallying the country on domestic soil while attempting to garner sympathy abroad – most specifically in China – by portraying Japan as the virtuous Empire at war with the cowardly West. This changed dramatically during the occupation with media censorship now coming from SCAP and the U.S. rather than the Japanese Empire. Unspeakable topics in post-war Japanese media included any mention of the atomic bomb, nationalist or pro-imperialist sentiments, criticism of the U.S. occupation and government, and criticism of any government deemed “non-democratic” – primarily communism.

The rough timeline of Concrete Revolutio places the meat of its various narratives in the thick of post-war rebuilding. Censorship of media along with general discontent at the U.S. occupation led to numerous protests, the most infamous of which took place following the Treaty of Mutual Cooperation and Security – anpo joyaku or ANPO – between the U.S. and Japan in 1960. These protests mark a key turning point in Japanese history as they are widely considered as the birth of citizen activism in Japan.

Other anime properties have touched upon the volatile nature of this period in Japanese history; however, Concrete Revolutio is oddly specific in its continued references to post-war media blackouts. Combined with the series’ continued chiseling away of a black-and-white superhero landscape, the post-war setting of Concrete Revolutio is a noxious stew of censorship and various parties attempting to use media for their respective aims without respecting the immeasurable amount of moral gray areas. 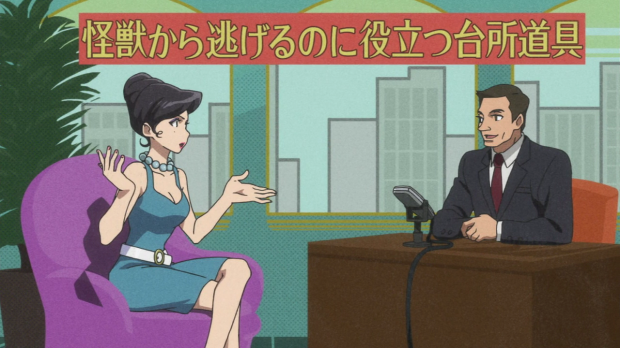 “At that time, there was a nation-wide debate going on about beasts. Are they evil, or are they our victims? The younger generation was especially sympathetic to the beasts. It was as if someone was directing it to be that way . . . “

What ultimately matters in the entire beast conflict is not who is “right” or “wrong” – again, the series maintains an incisive attack on black-and-white morality throughout – but who controls the press and stages the conflict. Jiro Hitoyoshi, who has the most conviction of all Superhuman Bureau members regarding his personal position on beasts, is initially framed as the bad guy, aiding Beastly Radio Wave and their allies from the Imperial Ad Agency. At the end of it all, he’s called upon to defeat Mega-gon, the beast initially touted as a friendly protector in the name of furthering public sympathy for beasts.

Throughout, superhumans are known entities but any mention of them is quickly silenced due to the media blackout. In fact, superhumans were again enlisted to fight the beasts earlier that same year – the 41st of the Shinka Era, about a month after the not-Beatles Budokan appearance – and remain Japan’s worst-kept secret.

“There are approved superhumans in the police and security forces. Once the secrecy laws are changed, a nation-wide superhuman project will begin.”

Later, in the 42nd of the Shinka Era, Angel Stars make their debut as the first approved superhuman band. Their campaign has a far more nefarious design, as they become poster girls for chocolate laced with an superhuman suppressing drug. Those that look up to them as superhuman and buy their products will likely have their own latent powers suppressed, thereby diminishing the superhuman population. Thwarted by the superhuman comedy band Mountain Horse, Angel Stars nonetheless embody the government’s continued distrust of superhumans even while publicly representing them as desirable.

Earth-chan – a lovely call-out to Astro Boy – offers another look at swaying public opinion. Where specific Imperial Ad Agency campaigns, like that of Beastly Radio Wave and later the Angel Stars’ subversive anti-superhuman marketing, target the public with a precise aim and influence, Earth-chan holds the public in the palm of her robot hand. She has the power to instantly change the prevailing social atmosphere, but only responds to specific calls of duress, as is her programming.

This makes her a precious commodity for those who would want her help in manipulating the general public. Earth-chan is lauded as a force for good, and therefore has the power to single-handedly determine which side is seen as the “right” one. Her influence is less outwardly manipulative; however, as she is unaware of the long-term consequences of responding to individual cries for help, Earth-chan’s actions can be ultimately detrimental to those whom she helps.

The more Concrete Revolutio reveals its web of propaganda and mass communication from various parties, the more questions arise. Why was the media blackout on superhumans enforced following the war? Was there a specific incident that caused public opinion to turn against superhumans, or is the general distrust of anything different another tool in the government’s arsenal? Throughout, the series maintains its focus on struggling with one’s personal morals while dealing with constant media influence.

Perhaps the most pertinent example offered by Concrete Revolutio comes from the aforementioned band Mountain Horse. Once at odds with the Bureau in the 44th of the Shinka Era, Jiro goes to recruit Mountain Horse for his yet-to-be revealed cause. Upon seeing the band’s performance, Jiro laments that Mountain Horse don’t want to become superheroes, while Fuurouta insists that they already are, with their ability to make others laugh. Mountain Horse may not be performing grandiose acts of courage, they eschew both public opinion and those who would manipulate them for a simple life of doing what they love.