Sodachi Oikura says the above during the waning moments of her time in Owarimonogatari. In returning to the town of her childhood – given a rare opportunity by circumstance – Oikura felt that something in her life might change.

The Monogatari series is big on changing one’s self by addressing one’s figurative inner demons, represented by actual oddities, ghosts, and spirits over the course of a character’s specific narrative arc. Oikura marks a significant deviation from this established norm, as her specific problem isn’t exacerbated by an oddity. There is no crab, snail, monkey, snake, or cat as a physical manifestation of her personal problems. Instead, there’s just a venomous, creeping bitterness that trips off of the tip of her tongue as if she’s about to vomit on whomever she’s speaking with.

As a child, Oikura is shown as withdrawn and sullen. Placed into the protective custody of Koyomi Araragi’s police officer parents, Oikura does nothing but curl up in a ball and watch as young Araragi plays with his two younger sisters and their friend, Nadeko Sengoku. 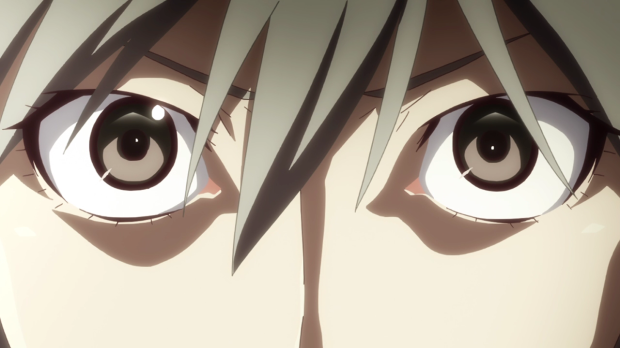 Fast forward approximately a decade and little has changed. Oikura still curls up as if she’s about to be hit, or trying to shrink away from everything while simultaneously seething with rage. Very little about her appears to have aged aside from her hatred. Her hairstyle is the same. Her hair accessories are the same. Her eyes are now filled with full-on contempt rather than the mixture of anger and fear that she had as a child.

All of this caustic buildup is unloaded on Araragi when the two meet again in their final year of high school. For Araragi, he only has the memories of Oikura from two years ago, and the brief recollection of a mysterious math tutor – whom he know identifies as Oikura thanks to Ougi Oshino’s probing – in junior high school.

However, the Sodachi Oikura of junior high school, a “math fairy” in Ougi’s words, has a completely different temperament for a few reasons. The first being that she’s initially only seen from Araragi’s perspective in flashbacks. He remembers her as a kind and curious girl who loved math, nothing more. Her face is always obstructed or half-shown – due to Araragi’s missing memories – although she still appears generally happier than the young, sullen girl at Araragi’s home a few years prior.

Oikura’s happier demeanor also has to do with the fact that she was attempting to jog Araragi’s memory from when she had stayed at his house previously, thereby spurring him into saving her from her horrible and abusive home life. Choosing to return home as a young girl, Oikura was abused further when she began to pushback, now with the knowledge that not all homes were like her own. Seeing Araragi later on in junior high must have appeared to her like a lifeline, as it was his house that made her realize the gravity of her awful situation. 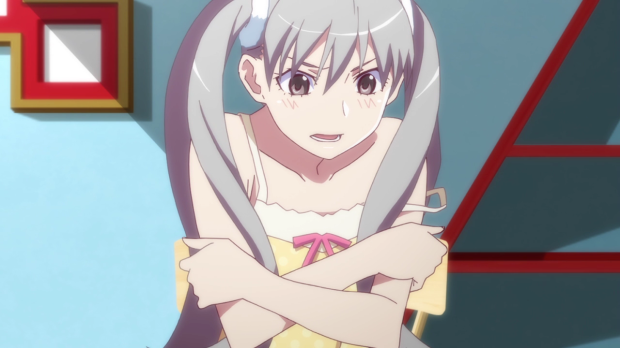 “I’m so embarrassed that I tried to save myself when it meant kissing up to a guy like this! I threw out my pride back then to flatter someone like this! I licked and lapped his shoes, at least emotionally . . . Embarrassing! I want to die!”

However, for the older, high school Oikura, her junior high school actions are now met with a torrent of self-loathing and rage. She hates Araragi for not remembering her – both in junior high school, and later in high school – but more than that, Oikura hates and blames herself for her mother’s death, in spite of it being in no way her fault. Oikura also hates the manner in which she lowered herself in an attempt to inspire Araragi – the kid who had initially made her realize how awful her life was, a kid who doesn’t even remember her – to save her.

This is expelled outward not through any sort of supernatural being, but in a torrent of stunted words and an eventual fistfight with Hitagi Senjougahara. Upon visiting her at her house, Oikura asks Araragi to continue being her villain so she doesn’t have to blame herself or her mother. The years of abuse and neglect without any sort of release have taken their toll to the point where Oikura hasn’t the first idea of how to let go of her self-hatred. Owarimonogatari continues to show her half-obstructed, curled up in a chair, or face overshadowed as visual manifestations of her loneliness and despair. 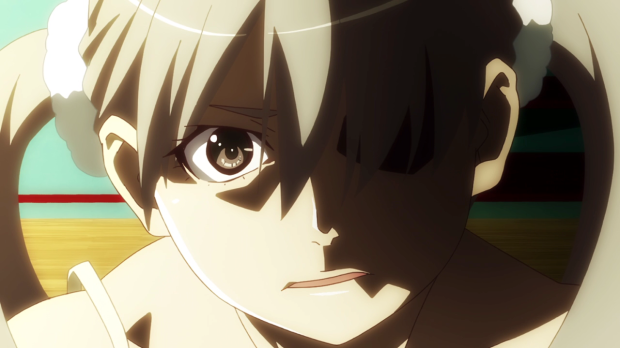 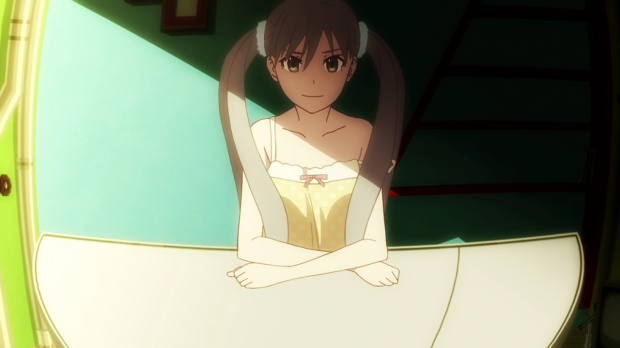 Turning Araragi into a villain won’t actually help Oikura – it only plays with Araragi’s own self-loathing and insecurities – but it’s the only thing she can think of when no one in her life has showed her how to be nice beyond wanting something from others. It’s easy because it gives her an outlet without having to be introspective.

However, Owarimonogatari forces her to take the difficult path thanks to Tsubasa Hanekawa. Hanekawa knows a thing or two about being from an abusive family and blaming one’s self for their actions. She sternly tells Oikura that happiness is elusive and incomprehensible because Oikura isn’t trying to be happy. Had this been anyone else giving Oikura this speech, it could have easily devolved into victim blaming, but because it’s Hanekawa, Oikura lifts her head up and listens.

Hanekawa isn’t saying anything that Oikura doesn’t already know, but it still takes a deft and experienced touch to force Oikura to listen. She isn’t telling Oikura that her father’s abuse or mother’s neglect is Oikura’s fault – this also extends to the circumstances of Oikura’s mother’s death later on in the series. Instead, Hanekawa is warning Oikura that happiness is also related to whether she seeks it out, which requires allowing time to heal without incorrectly blaming herself for what happened.

Later, upon hearing the truth about her mother, Oikura finally seems somewhat at peace. She states the aforementioned sentiment of how she felt that returning to her hometown would give her a chance to change.

This is also a turning point for Araragi as well. While it’s indubitably Oikura’s story – even as early as Ougi Formula – this marks a time where Araragi has to step back from the situation and walk away. Typically, Araragi’s sense of justice – which is also somewhat born of self-loathing – would interfere and inspire him to perhaps press Oikura further. However, this situation the audience sees an Araragi who is forced to let go, partially because of the fact that he failed to remember her, but also because Oikura’s future is wholly in her hands. It’s a wonderful starting point for what later will become Araragi confronting his selfish sense of justice, and how he always wishes to play the role of the hero.