I don’t remember the first time I realized an inherently unfair societal norm or institution. The closest anecdote that comes to mind is a silly debate that divided my fifth grade class by the sexes. At stake was the ability to play flag football at recess with the boys, which had been recently outlawed by our teacher. There weren’t enough of us who wanted to play without having coed groups, so the recent ban against combining boys and girls had led to no flag football at recess for anyone.

Fortunately, our teacher was also the sort who generally wanted us to find our own answers, and thereby organized a debate. The girls team met that night at my friend Diana’s house. We researched previous legal cases, coordinated our outfits, and drew up charts with pertinent facts.

The debate itself was quite orderly. For their part, the boys weren’t as organized and didn’t care much about defending their position. Yet, when it came time for my teacher to make a decision, she still erred on the side of caution – and angry parents – by upholding the existing rule.

There are many reasons that our teacher likely decided against coed flag football at recess. I don’t bring this up because I’m still angry about it, nor do I identify this as a defining moment of my life; however, it was another drop in the bucket towards understanding how unwritten societal rules work. For a tomboy like me with decidedly “boy” interests, this was just another gentle push away from those interests and towards something else.

It’s rare that one shining moment will suddenly reveal how unfair some of these existing unwritten rules work, as most things are coded from an early age and generally herd children in the so-called “right” direction over a period of time.

In Yuri Kuma Arashi, we are privy to Lulu Yurigasaki’s moment, the moment she realizes that her younger brother – by virtue of being male – will succeed the throne over her, in spite of the fact that she is older. 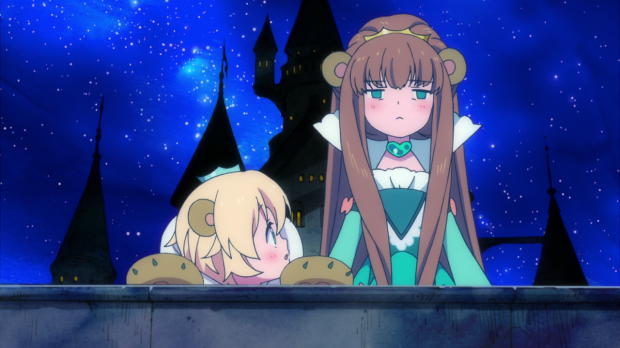 Yuri Kuma Arashi is specifically concerned with such social conditioning. It primarily focuses on lesbian relationships, but also touches upon the other ways in which societal norms get in the way of of having any relationship, including a familial one.

It’s no coincidence that Prince Mirun is born on the “day of severance” – signified by a meteor shower that is touched upon again and again throughout the series – the defining moment where certain characters become aware of their respective circumstances and how society actively pits them against others.

Lulu grows up heavily resenting her brother’s existence because he reminds her of the inequalities inherent to their world. It’s not his fault – for his part, Prince Mirun remains blissfully unaware – and deep down, Lulu knows this herself, yet it irrevocably affects their relationship ensuring that she won’t ever give him a chance to get close. She spurns his every attempt at becoming closer to her, every sign of affection, and every declaration of love, until the day that he unexpectedly dies. While the series had continuously and comically shown her trying to kill Prince Mirun herself, there’s no doubt that Lulu feels the weight of his loss upon his death. Realizing that she threw away her relationship with her brother, her emptiness is why Lulu eventually joins Ginko Yurishiro in the latter’s quest for her own lost love.

For the rest of us, there won’t be surreal construction landscapes, brothers somehow surviving antlions only to die to a bee sting, or a mirror we must shatter in order to reach what we want. However, as outwardly ridiculous as Yuri Kuma Arashi could be, it had a surprisingly deft touch when showing societal structures, how they affect our relationships, and what it takes to rise above them.