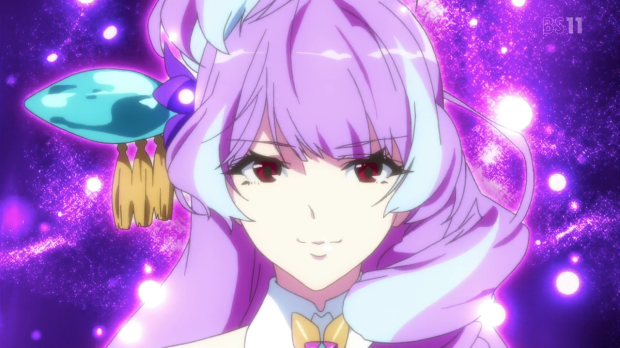 If one follows Shoji Kawamori’s somewhat dodgy, albeit interesting, excuse for an overall Macross timeline, his answer is this: much like history that is studied in classrooms and recreated in period dramas, Macross is the retelling of a historical event. The characters themselves may change, but every iteration will have the Macross staples of fighter pilots in transforming Valkyrie robots, idol singers, and a love triangle.

The first episode of Macross Delta breezes through this checklist with obvious ease. Plucky stowaway Freyja Wion, disillusioned grunt worker Hayate Immelman, and hapless Delta Platoon Lieutenant Mirage Farina Jenius – whose last name should immediately ring a bell with the seasoned Macross fan. Presumably, these three will compose the expected love triangle that will develop against the backdrop of a virus that is both spawned from song and quelled by song. Other checkmarks include the alien race Zentradi, a fighter pilot squadron, and an established group of idol singers that said squadron protects: Walkure. 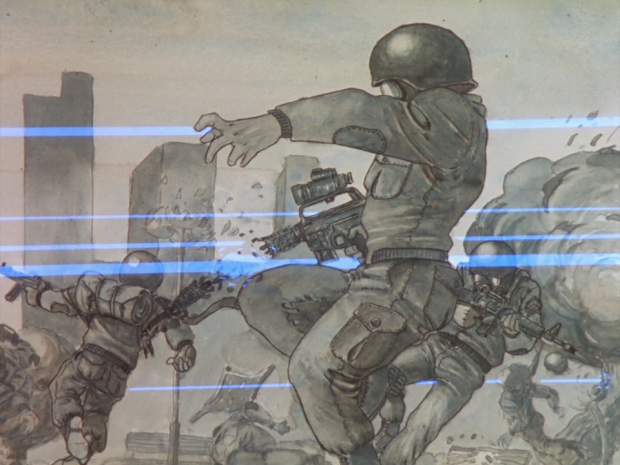 With each iteration of Macross, the checklist becomes all the more obvious, especially to the shrewd viewer already familiar with the Macross oeuvre. Super Dimension Fortress Macross begins with a description of the Unification Wars, in a fairly extensive opening monologue. In comparison, Delta also begins with similar exposition regarding Var Syndrome, an unknown virus that affects human and zentradi alike, while additionally introducing the idol group Walkure and their fighter squadron Delta.

This is the first, glaring difference, between SDF Macross and Delta – additionally, SDF Macross and all that come after. SDF Macross was, from its beginning, more focused on the gritty battles that humans fight with one another. Alien technology is the catalyst for humanity’s encounter and subsequent war with the zentradi, but the focus of the series inevitably shifts back to the damage that humans irreparably do to one another in both love and war.

Subsequent, glossier versions of Macross – Frontier, and the new Delta specifically – are relatively unconcerned with this. Perhaps it’s because the focal point is all-too-often the love triangle itself, and characters are far more established in their pre-packaged roles, which brings the established Macross audience back to a key character from the original SDF Macross series, Lynn Minmay.

Minmay admittedly wanted to become a star prior to the events of SDF Macross – this post is concerned with the Minmay of SDF, not Do You Remember Love? – moving in with her aunt and uncle as part of following this dream. This proximity alone is what eventually traps her on the Macross, and eventually precipitates her future stardom.

One could easily make the case that Minmay succeeds by default. She was a pretty girl who ended up being in the right place at the right time. Unlike those who come after her, namely Ranka Lee of Macross Frontier fame, she has no close competitors. Following her Miss Macross win, and the fact that a broadcast of it goes out to the zentradi fleet, Minmay becomes a star by virtue of her mere existence. This is coupled with the zentradi’s utter lack of exposure to “culture,” or in the specific case of Minmay, catchy pop music. Her most fervent and loyal fans are the zentradi that she affects, again, simply by existing as a pop idol on the Macross. Ensuing Lynn Minmay expys have rivals, and the idea of the intergalactic songstress is already well-engrained into their cultural memory. Additionally, music’s impact on the zentradi initially came as a shock to both the Macross crew and the zentradi themselves. Later Macross iterations have already established the effect that music has on the zentradi, continuing to toe the odd line between emotional inspiration and cultural imperialism. They trade the gritty human interaction found in SDF Macross in for a slicker, more manufactured idol presentation from the series’ beginning.

The Macross Delta premiere is the most synthetic fabrication of the Macross idol product to date. Delta‘s Lynn Minmay expy is Freyja Wion – a seemingly higher up member of the Windermere colony – who fled her home and an arranged marriage to try out for an opening in Walkure: the famous idol group that fights the Vars Syndrome.

If one is looking for SDF Macross in Delta, there’s initially not much to find beyond the checklist. However, what may pique the SDF Macross fan specifically, is the fact that the Vars Syndrome is the closest Macross has come to refocusing on the inner squabbles of people, rather than an unknown alien invader.

That being said, Delta still shares far more similarities with another Kawamori project, AKB0048, than it does with the original Macross series. Seasoned Macross fans will approach the series already knowing that Freyja will become the next songstress, Hayate will become her pilot, and Mirage – who is the most interesting piece of the puzzle, as she seems reminiscent of the original Misa Hayase more than anyone else – will complete the triangle. Music will once again save the world, likely against stunning action setpieces.