Since its inception, Concrete Revolutio: Choujin Gensou has dabbled with the concept of time — most obviously with actual time travel on top of playing fast and loose with chronology. The series has a myriad of reasons to watch: musings on heroism and justice, real-life complements to historical events and Japanese student activism, and strong emotional narratives that elevate Concrete Revolutio‘s characters beyond cut-outs for what they stand for.

In the painfully human fashion, what they stand for changes depending on context and timeframe.

“What did I do? No, I know. I knew. I should have known, what I should do. The S Planetarian is a criminal. Jiro protects criminals too. They are both my enemy . . . I knew this. I want to be fixed. I will get fixed. I am broken. Broken . . . I must be able to do the right thing. You are me from the past, back when I had no questions.”

Detective Shiba’s inner turmoil throughout the series’ second season premiere is reminiscent of Super Jaguar’s musings when he’s face with his other self. Both characters are forced to see their own hypocrisy — or the errors of what they have created — and live with the outcome of their actions, even if said actions don’t line up with how their thought processes have changed or how the world has changed around them.

A bona-fide time traveler, Jaguar is faced to address the consequences of his repeated time hops in the series’ tenth episode with the arrival of Infernal Queen. Jaguar is the creator of Infernal Queen — a group that takes black and white approach to protecting superhumans — in addition to the Superhuman Bureau itself, around which Concrete Revolutio is centered. 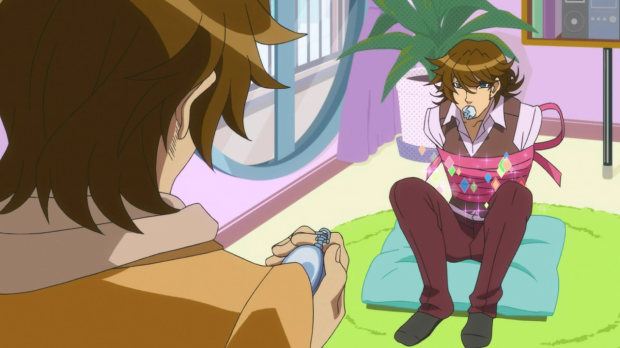 While Detective Shiba is a deceased human detective now in the body of an android and employed by the Tokyo Metropolitan Police, Super Jaguar is a Historical Revision Police Officer from the 25th Century. He first created the violent IQ to ensure that superhumans would survive into his time. After being dispatched by the Time Patrol to stop himself, Super Jaguar created the Superhuman Bureau to look after and protect superhumans in a more bureaucratic way. Yet, IQ still existed and was directly at odds with the Superhuman Bureau, seeing the bureau controlling superhumans rather than aiding them — two snapshots of Super Jaguar at specific times warring with each other over what is “right” for superhumankind.

The efforts of both Detective Shiba and Super Jaguar result in scenes where they must kill their “past selves.” Concrete Revolutio gives them similar visual blocking in their respective climaxes as the two confront their adversaries. Super Jaguar commits to killing his IQ self, even with the understanding that he too will fade away due to the Grandfather Paradox. Detective Shiba kills the Space Sheriff Washizu, identifying him as a younger self, “before he had questions.”

In Super Jaguar’s scene, he’s confined to a narrow hallway. The only two people in the scene are Jaguar and his IQ self. He shoots, and the body is shown in the foreground, dead. Detective Shiba’s shot is similarly framed, but the viewer is aware of his audience: the Superhuman Bureau, Jiro Hitoyoshi, the criminal S Planetarian, and the looming government robot that Detective Shiba had once piloted. Jaguar is directly facing himself, while Shiba’s mind is still in turmoil, affected by his surroundings — killing Sheriff Washizu is part and parcel of making sense of his own thoughts.

Shiba forcefully rips a chip from Washizu’s head, dramatically framed with his former robot on its knees in the background. By contrast, Jaguar in Episode 10 simply looks down the hallway at his dead self and waits to die. Death never comes, and he stares at his hand in bewilderment. Shiba laughs manically at the chip, which he later says helped him realize what he had to do. The first person to speak after Shiba takes the chip is none other than Jaguar, who comments that Shiba was more human than anyone.

“Time can never go back to nothing. We layer paper on top to draw a new picture, but the old picture remains underneath. The IQ that I created still remained . . .”

At the end of their episodes, Super Jaguar and Detective Shiba are given a sunset, but it’s hardly a figurative one.

Jaguar becomes an unsolvable time paradox. His Time Patrol stopwatch serves as a blueprint for its own creation. Shiba acknowledges that he killed the one who was most like himself, and still muses on whether it was “the right thing to do.” Killing your past self doesn’t mean that it ceases to exist. It lives on as a part of you, as you build on your own past by living through the present. Two men, who both lived multiple lives, must now face the future and live knowing the pain of their past.