When Gatchaman Crowds first aired, I was undecided on what direction the series would take. The premiere episode hinted at anything from poking fun at superheroes to an odd “buddy cop” duo starring Hajime Ichinose and Sugune Tachibana with Hajime inevitably spoiling Sugune’s stodgy plans, dragging his character forward. While the latter does happen throughout the series, it’s a byproduct of Crowds‘ main focus — examining existing societal structures and social mores.

Revisiting the series — especially with sequel Gatchaman Crowds insight fairly fresh in my mind — reframes the characters, their interactions, Rui Ninomiya’s social media empire GALAX, and the most minute details within the larger reference of both seasons’ thematic elements.

Sugune certainly isn’t as important of a character this time around as he was upon first watch. When the series first aired, my mind focused on him and Hajime together as a pair, with Sugune being the main protagonist of Crowds and Hajime his goofy sidekick. Given the events of the first two episodes and asked to digest them, this is what my mind came up with — a likely result of my own media-watching habits where protagonists are overwhelming male, especially in a superhero series. Hajime may be there to give Sugune a good swift kick, but Sugune will inevitably end up being the main character of this new Gatchaman series — the latest in a long-standing superhero franchise.

Boy, was I wrong.

The title of Gatchaman Crowds‘ second episode is “Asymmetry,” another art term that is, like “Avant-garde” in Episode 1, a call-out to where this series wants to go with its narrative.

From a human perspective, asymmetry is more often seen as a physical deformity indicative of illness or injury. Asymmetry often accompanies a loss of balance, setting the viewer ill at ease, regardless of whether they’re looking at another human face, a piece of art in a museum, or nature. In art, symmetry is used to create a peaceful, balanced, and strong tone. Symmetrical pieces have more resolute, permanent airs about them, designed to make a firm statement or calm the viewer.

Yet asymmetry is not only natural and ordinary, but also biologically necessary for humans to function — the most obvious example being your asymmetrical lungs, which allow room for your one heart. Asymmetry and symmetry are often used as shortcuts for “bad” and “good” — or at the very least, “unsettling” and “calming” in visual media due to how we as an audience respond to them. In art, asymmetry is associated with the modern period whereas symmetry was the standard in traditional works.

Gatchaman Crowds used the title “Avant-garde” for its premiere, telling us where it wants to go — ahead of the vanguard, into uncharted territory. It then introduces Sugune first, the very model of a sturdy superhero protagonist, before throwing Hajime into the mix. “Asymmetry” draws a line between Hajime’s point of view and Sugune’s traditional outlook setting up one of many battlegrounds for the rest of the season.

Sugune is a symmetrical person in a figurative sense. The qualities of balance, structure, and traditional are all calming to Sugune, and he tries to live his life in the most orderly fashion possible.

He’s often shown in front of symmetrical backgrounds, like the subway car shown above. The windows, seats, and ubiquitous GALAX advertisements appear as if you could fold this entire screenshot down the center and have it all line up — note how the GALAX ad on the left is even written backwards, possibly intentionally or as a simple background art shortcut — with the only differences Sugune’s left arm and the passengers on each side. 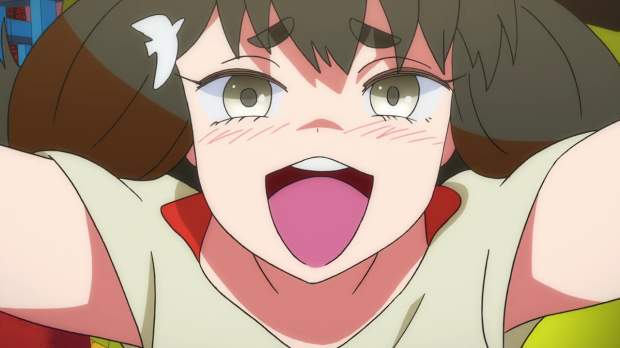 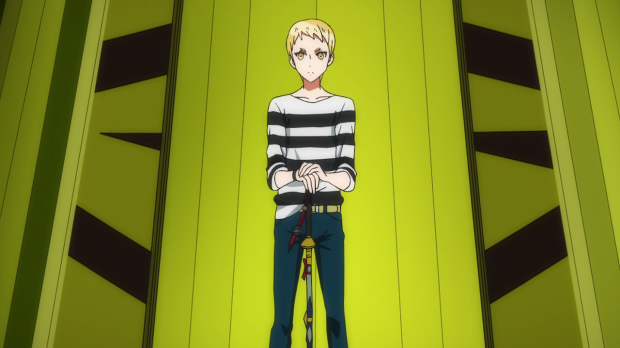 Crowds makes it a point to compare Hajime and Sugune whenever possible, noting their different reactions and approach to even the most mundane situations. Above, Hajime is pictured jumping out of the elevator in the G-Crew’s hideout. Moments later, Sugune enters, heralded by the fact that he bangs his katana on the ground. Hajime immediately leaps out of the elevator while Sugune is given an entrance, flanked by the symmetrical doors of the elevator. As the doors close, the gatchaman symbol forms his background, another representation of the superhero tradition.

“Listen, don’t think about why you fight or anything else. Just carry out the mission! There are casualties every day!”

Most of Hajime and Sugune’s onscreen time in Episode 2 is spent arguing, especially after Hajime lets a MESS go, undermining Sugune’s authority as her gatchaman mentor. His words echo the statement issued by Paiman above — don’t think about why you fight, just do what you’re told. 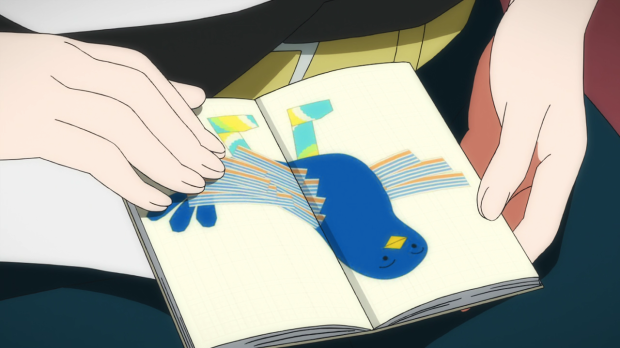 Sugune excels at doing what he’s told — rigid and obedient without thinking about what he does or why he does something. He’s the model student of a top-down society that teaches respect for superiors, often without question.

When confronted with his presumed superiors — the Tachikawa City fire chief and mayor — in a casual environment, he’s beside himself that Hajime didn’t introduce him properly and apologizes for his insubordination while the mayor waves him off and shows him pictures of his daughter. Hajime reiterates that “they’re just normal guys.” When asked to create a collage and given no instruction, he struggles, thinking that there must be a right way and a wrong way to make one. 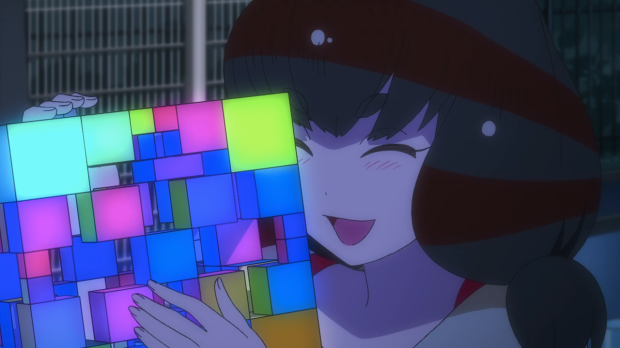 In this same episode, Hajime stops attacking the MESS and it releases its captives. While Sugune warns that it could be dangerous, Hajime wants to communicate with it further, allowing it to tell them where all of the missing people went. The MESS never become an integral plot point as far as in-universe events, but continue to float around the gatchaman hideout throughout the series, a constant reminder of what a bit of communication can accomplish.