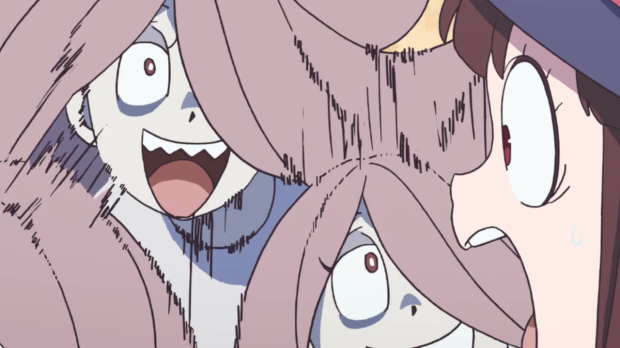 Every episode of Little Witch Academia reiterates the theme of inspiration. Protagonist Akko Kagari embodies this theme through her love for disgraced entertainer Shiny Chariot — which she shouts from the rooftops despite Chariot’s poor reputation in the magical world. School prodigy Diana Cavendish was also inspired by Chariot, but keeps her love hidden rather than face similar ridicule that Akko inspires.

When Lotte Yanson received her own, poignant episode about her love of night fall, a trashy and expansive novel series with a rabid fanbase, it became likely that Akko’s other cohort, Sucy Manbavaran, would receive her own episode as well. Although the main narrative focuses on Akko’s love of magic against the backdrop of magic as a dying art, supplementary stories involving other characters within the series are only natural, especially for a series that’s more episodic in nature.

I knew that a Sucy episode was on the horizon, but was also apprehensive about its execution.

Sucy Manbavaran is a deceptively tricky character. Her role in Little Witch Academia has been fairly one-note, and while that note is hilarious it also toes the line between lovably insane and genuinely awful. Giving her a sad backstory, or any backstory that explained why she is who she is, would ruin her delightful, occasionally evil, nature. Nothing ruins a joke more quickly than explaining the joke, and I was worried that Sucy’s episode would do just that.

As it turns out, I had nothing to worry about. 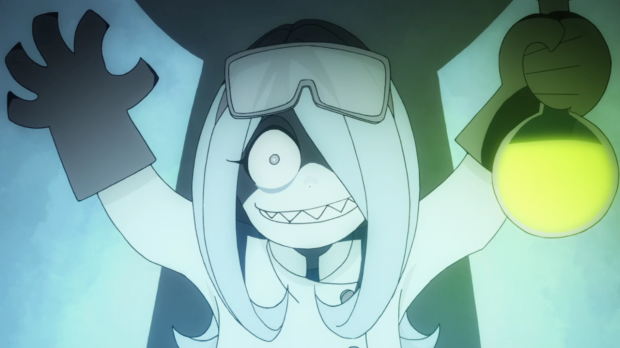 The episode begins with classic Sucy — awake at night, performing unauthorized experiments in their dorm room. She first tries to feed Akko her concoction, but backs off, saying that it would turn Akko into a powerful witch, thereby ruining her fun. This is the Sucy we know and love. A prodigy in her own right, Sucy spends her time exploring more occult, forbidden avenues — reiterated visually by her favorite thing, mushrooms — than Luna Nova allows. Her willingness to experiment on her friends, and use others to get what she wants, is present from the series’ premiere when Sucy tricks Lotte and Akko into helping her acquire a rare cockatrice feather. She is content to sacrifice them until she is briefly saved by Akko.

Sucy’s potion in Episode 8 necessitates a trip into Sucy’s mind, and who better to take it than Akko. While the previous two episodes have focused on Akko’s flaws — she leaps before she looks, doesn’t follow directions, and wants to be five steps ahead to the end result without doing the required hard work — this episode piggybacks on last week’s ending by showing off Akko’s strengths. It makes sense that Akko would jump immediately at the chance to get inside Sucy’s head. She’s demonstrated a surprising amount of empathy towards others — despite her own selfish nature — and she cares about Sucy a great deal. 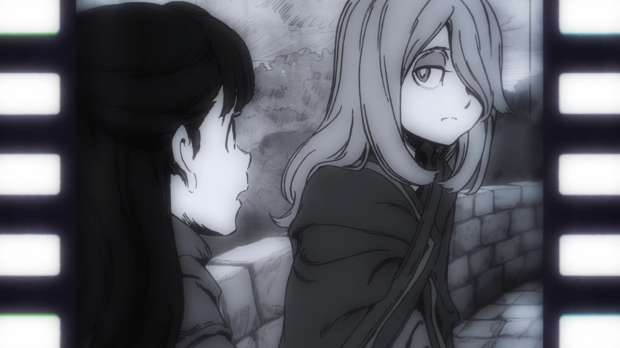 Her trip inside Sucy’s head reveals that Sucy cares a great deal about Akko as well. In a trip to the drive-in movie theatre of Sucy’s mind, the best film is her memory of meeting Akko. One of the Sucys mentions that the theatre never stops showing it, a nod to the depth of Sucy’s feelings for Akko, even if she never shows them outwardly.

Prior to this, Akko also discovers the many Sucys inside Sucy’s head. Each of these facets or desires are put on trial in Sucy Court, inevitably sentenced to death by Sucy. This is one of the more convincing portrayals of emotional repression that I’ve seen out of an anime, and Little Witch Academia shows this through mile-a-minute media references that don’t crowd the narrative (I’m looking at you, Space Patrol Luluco).

It also manages to depict this without becoming sappy or heavy. The death of her emotional seedlings is given just the right amount of reverence before transitioning back into comedic territory, with Akko leading the charge. Everyone represses emotions sometimes, and its here where the intersection of Akko and Sucy’s characters complement each other so well. Akko represses very little. Her attitude isn’t ideal, but it’s useful in certain situations. Continuous emotional repression is equally unhealthy. Akko’s push for Sucy to read night fall — a hidden desire that Sucy quickly sentences to death in her mind — at the end of the episode is noticeably met not with denial but a simple, “Lotte, Akko is being annoying.” While Sucy doesn’t acquiesce or admit to this desire, she also doesn’t deny or fight Akko. 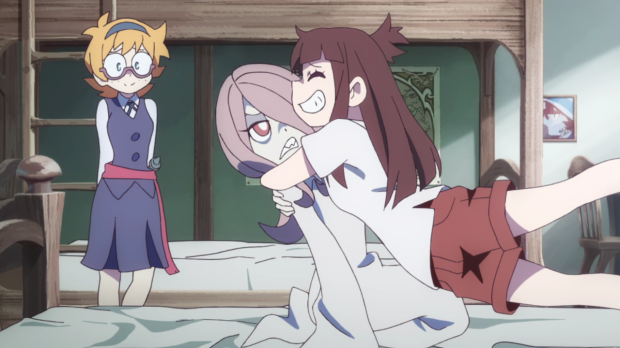 Little Witch Academia never explains why Sucy was so sad or isolated prior to meeting Akko. It doesn’t have to and, most importantly, it recognizes this. It sheds insight into how Sucy’s mind works — and her relationship with Akko — without being emotionally overbearing or ruining the slightly dark nature that Sucy embodies. She’s still the same Sucy that experiments on Akko, snorts mushrooms, and concocts dangerous potions. Now she just might read night fall when no one is looking.