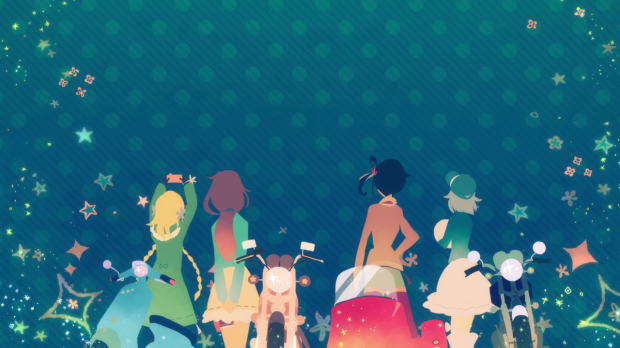 When The Rolling Girls debuted in early 2015, it immediately caught the attention of the anime blogging community. Kunihiko Ikuhara’s new project which had first been named “Penguinbear” and later was revealed as Yuri Kuma Arashi had dominated my thoughts on the 2014-2015 winter anime season. The Rolling Girls only appeared on my radar thanks to Twitter buzz and colorful screencaps.

Halfway through the series’ first episode, The Rolling Girls treats its audience to a quiet moment between two young women who are sisters in spirit — although not by blood — riding home on a empty road after a hectic afternoon. They are forced to stop — literally, thanks to a traffic light — and end up chatting about their work.

Masami Utoku, the eldest, is a supposed aide to local hero Matcha Green (also known as a “best” in the world of The Rolling Girls). Nozomi Moritomo, the youngest, is a Matcha Green superfan, and additionally looks up to Masami as if Masami herself is the hero. What follows is a quiet conversation where Masami not-so-deftly avoids revealing to Nozomi what we as an audience already know — Masami is Matcha Green. This is framed with nuance and an appropriately serious touch, a stark contrast to the bombast and brightness of the rest of the episode. Director Kotomi Deai strikes a perfect balance, putting their sibling-like relationship at the forefront while the idea of the superhero “best” and peon “rest” form the backdrop.

Chances are, if you’ve heard of The Rolling Girls, what you’ve listened to has not been complimentary but instead bitter disappointment at its many failings. While animation cuts from various episodes throughout the series, it’s vibrant settings, and the use of The Blue Hearts’ discography are still unequivocally praised, The Rolling Girls itself is decidedly not.

No other series has challenged my idea of how to criticize something quite like The Rolling Girls.

I find myself couching my words regarding The Rolling Girls and this makes me uncomfortable. It’s like knowing the ins and outs of how an advertisement works, but still being drawn to whatever idea or product it’s advertising. Part of me feels that I shouldn’t have to always start every sentence with, “The Rolling Girls is [complementary adjective] but [glaring flaw or weakness within the series].” Yet, The Rolling Girls has a myriad of flaws that should be dissected when evaluating it as a complete whole — highlighting a work’s flaws should be part and parcel of any criticism.

The Rolling Girls was near-universally panned by the anime community upon completion in late March of 2015 and the name became synonymous with disappointment. “Another The Rolling Girls” came to mean a series that started well but either failed to live up to its introduced premise, or a series that looked gorgeous but devolved into chaos — both traits of the series. A common joke is to pretend that The Rolling Girls only had two episodes or, depending on the generosity of the reviewer, a two-episode OVA and a Kyoto Arc OVA, the latter of which includes the highly-acclaimed “Stones” live concert.

I too was one of these people disappointed by the series during its initial run. Yet, like any disappointment in media, I can’t help but wonder how much of that is on me. Potential is a thing that must be ascribed to a work from a source. In the case of The Rolling Girls, I am the source and therefore part of the disappointment equation. The series was cast in a negative light for pulling a bait-and-switch on its viewers —promising a superhero series and giving a rambling slice-of-life — but I always wonder how much of my own disappointment is based on my own expectations, and how much of it is the series’ execution.

Because of this, The Rolling Girls is a series that I’ve wanted to rewatch for some time. 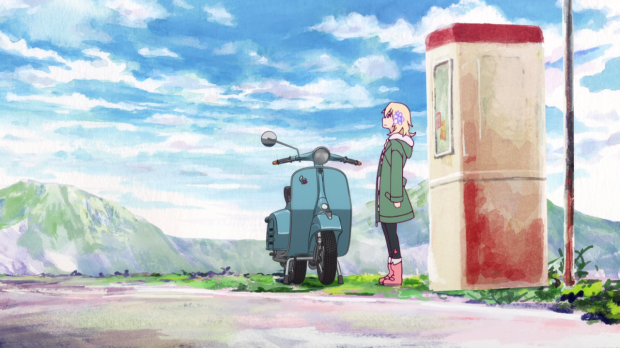 Upon rewatching, the first thing I immediately recognized is that the series suffered tremendously from a week-to-week format. The nature of tuning in weekly, isolates each episode for dissection, highlighting the series’ weaknesses.

And The Rolling Girls has many weaknesses.

I no longer feel as if I’m couching my language or qualifying what I will say next by saying that The Rolling Girls is full of flaws, but it took another complete watch of the series to get there. If anything, this rewatch further made the case for revisiting a series without the dreaded weekly format more than it made a case for The Rolling Girls itself.

My other takeaway was that I always loved The Rolling Girls, and even its flaws don’t change that. I could spend paragraphs talking about how its story is uneven and choppy, or how it tries to take on too many things by the end that it devolves into a random, uncoordinated mess and still end by saying how much I enjoyed watching it again regardless. 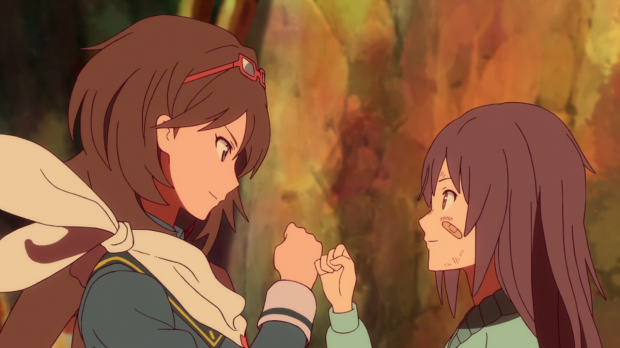 Rewatching allowed me to see things that I didn’t notice while begrudgingly queueing up the final episode in 2015 — from anime references to a surprisingly poignant bookending of Masami and Nozomi’s relationship. While watching the finale for the second time, I realized that the series was successful if you consider that the premise is the phrase shown in eyecatches and promotional material:

“Rolling, falling, scrambling Girls. For others. For themselves. Even if they’re destined to be a ‘mob.'”

The Rolling Girls isn’t about the “bests,” or superheroes fighting each other but about Nozomi and her ragtag band of rests, valiantly trying to fill the shoes of Masami/Matcha Green. While most series would focus on the extraordinary, The Rolling Girls is firmly rooted in the ordinary and average.

Naturally this leads to problems. Trying to sort out the overarching narrative involving aliens and stones is infuriating, especially week-to-week. The Rolling Girls is at its finest when showing Nozomi and her group at the periphery of something larger, and trying to find their place in a massive, colorful world. It’s at its worst when it puts the world and the bests at the forefront, making halfhearted attempts at explanation — the final arc is notably awful at this, introducing far too many factions and splitting up the four heroines for a time. They’re best left to their own devices, making their mark when they can while enjoying their time together. As Chiaya Misono says to Nozomi in the final episode, “You were my Matcha Green,” meaning that anyone, even the most average person in an extraordinary world can inspire someone else.

Talking about The Rolling Girls is still a challenge, but it’s one that I want to tackle, because it’s a series that I thoroughly enjoyed, flaws and all.