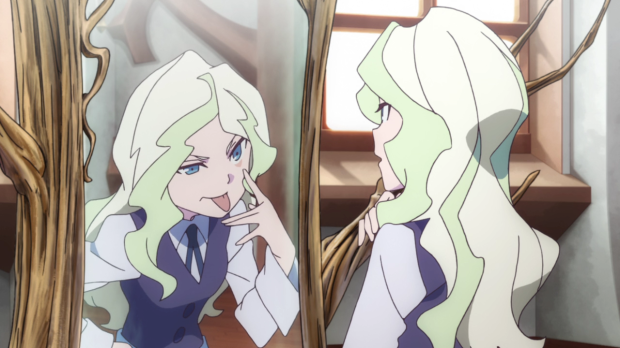 Who is Diana Cavendish?

What makes her, Diana Cavendish?

Take away the prestige attached to her recognizable family name and the simpering sidekicks. Treat her like any other student at Luna Nova, albeit with similar magical talent but less training. Would she inevitably rise to the top of the school or would she become just another student as magic continues to fade from existence?

If she isn’t the last hope of Luna Nova and the art of magic, then just who is Diana Cavendish?

Diana was born with everything — a well-known prominent family, prodigious talent, good looks, the best education, and nearly all of the resources to become the best witch of her generation. She took all of these resources and used them to surpass everyone’s expectations.

Not only is Diana often a foil for Luna Nova’s resident dunce, Akko Kagari, she’s also the divergent path. Nestled in the same audience, squirming in nervous excitement with the same breathless anticipation as young Akko was a young Diana, equally charmed by Shiny Chariot’s traveling magic show. Chariot inspired both witches, but only Diana had the resources at that age to pursue magic.

When she meets Akko face to face, Diana is already cold and hardened. Years of arduous study have placed her on a pedestal built not only from her peers but her elders and superiors. She’s already saved the school on numerous occasions, to the point where the faculty is now counting on her to become the savior of Luna Nova — and magic as an art.

Yet, the one thing Diana wasn’t seemingly predestined for is the revival of magic itself, despite what the Luna Nova faculty and student body believe.

Little Witch Academia‘s twelfth episode places Akko in the body of Diana. A magic mirror catches Akko in a moment of self-doubt and transforms her to look like Diana.

From that point until Akko as Diana is asked to perform magic, and fails, Akko is forced to see just the difficulties of Diana’s life. Around every corner, there’s another person who needs something from Diana or someone asking Diana to fix their problems. Diana helps a multitude of people, some of whom are her own teachers, with a variety of things on a daily basis. This only adds to Diana’s isolation.

Part of the privilege of being Diana Cavendish means that people automatically take her seriously, giving her the benefit of the doubt — something that Akko is obviously unused to, even though she spends very little time as Diana. The tradeoff is that Diana is constantly being petitioned by anyone and everyone for her help. As Akko tries to get out of everyone’s way while stuck in Diana’s body, people continue to seek her out, leaving Akko no chance to escape the charade.

A cursory look into Diana’s living arrangements reveals that she is purposefully separated from her suite-mates, Hanna and Barbara. Whether this is of Diana’s own wishes — or one more unintended result of Hanna and Barbara’s hero worship, insisting that Diana have a space all to herself as another nod to Diana’s lofty social standing — is unknown. However, it firmly divides Diana from her so-called friends. 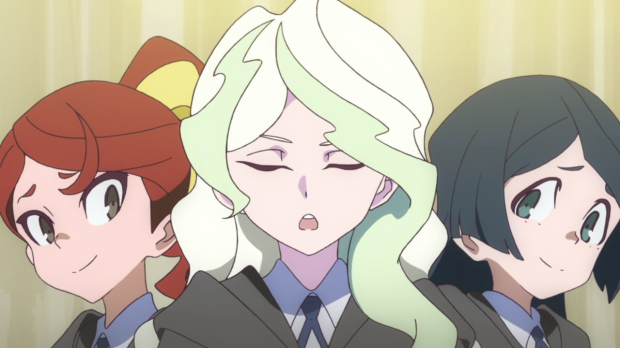 Visual framing also serves to isolate Diana. She is placed at the forefront of nearly all of her scenes — except those where she is truly alone — with Hanna and Barbara flanking her on either side. 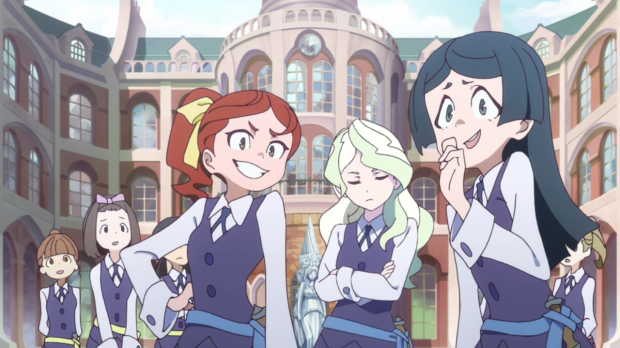 Even when she’s not in the center, she still commands the attention of the viewer, thanks to more flanking assists from Hanna and Barbara. 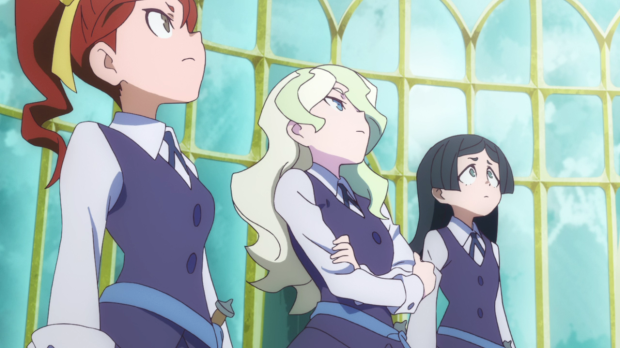 By contrast, Akko is only shown in this position a few times — when it’s necessary for her to take the lead and draw upon magic stored within the Shiny Rod. In these scenes she becomes almost a conduit for magic, drawing on Lotte and Sucy’s powers like Usagi Tsukino relying on her sailor scouts in Sailor Moon. 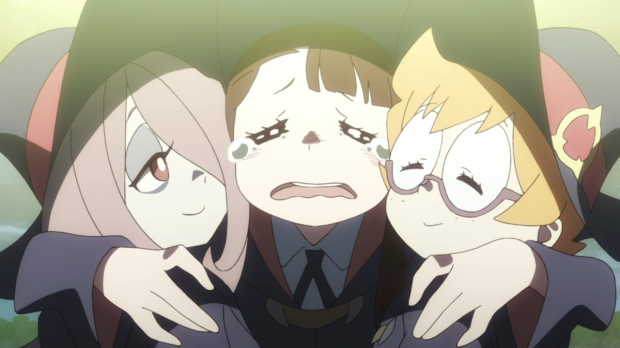 All other times, Akko is the beating heart of the trio but is anything but on a pedestal. This too is reinforced visually. Like the scenes where she becomes a center, Akko is visibly embraced and surrounded by friends rather than placed above them.

When Akko strikes out alone, her friends discover her plot and vow to help her. When Diana strikes out alone, her acquaintances either don’t pry — perhaps because they see Diana as above their station — or feel too inferior to help. Compare their magical displays in Episode 13’s Samhain Festival — Akko is assisted by her friends while Hanna and Barbara leave Diana’s side so Diana can complete the water summoning.

At the end of it all, Diana is rewarded with the title of Moonlit Witch, despite knowing that Akko should have been in contention at the very least. Disqualified due to rule-breaking, Akko is once again pushed out of the picture for Diana to receive more praise that she feels like she doesn’t deserve. The Luna Nova Samhain Festival is the papilliodya chrysalises situation on a far greater scale — Akko succeeds but Diana receives the accolades or award.

Here, Little Witch Academia strikes the perfect note for both Akko and Diana. Diana was right to doubt Akko’s words and motives due to Akko’s general lack of follow-through. Yet Akko is instrumental in reminding Diana of why Diana decided to put all of her effort — immense talent or no — into magic. They need each other to push one another to greater heights. Diana reiterates that Akko needs diligence and practice, not just passion, while Akko reminds Diana of the latent passion that inspired her in the first place, the passion that made her into the Diana Cavendish we know.