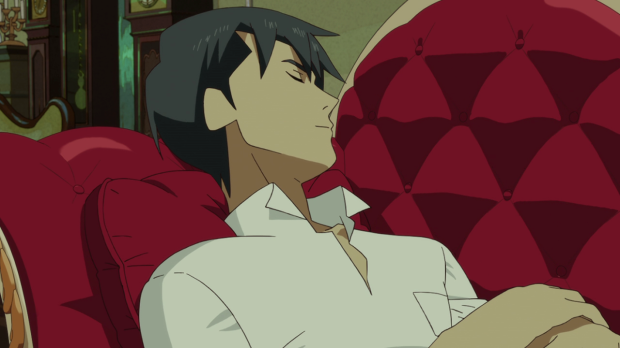 Supernatural stories at their finest ensure that — no matter how grand of a spectacle their conflicts become — they never stray away from intimate experiences with which their audience can resonate.

For example, one of the most affecting scenes in The Eccentric Family is that of an eldest brother holding up a smartphone to the ear of one of his younger brothers, a brother that just happens to be a frog. Visually, it’s ridiculous. Emotionally, it has the power to move a viewer’s heart, becoming an iconic image.

In its first season, The Eccentric Family started big before focusing on the personal struggles and triumphs of one tanuki family. This allowed the second season to immediately narrow its focus with a personal anecdote, then cast a wider net, capturing a few more conflicts before honing in on the personal once more. The problems and warmth of the Shimogamo family remain in the background — including a wonderful scene where Tousen, now the Shimogamo matriarch, visits her elderly mother — but the series has now shifted to include the devilish human trickster Tenmaya, and Professor Akadama’s (tengu Yakushibo Nyoigatake’s) estranged son Nidaime (Junior). 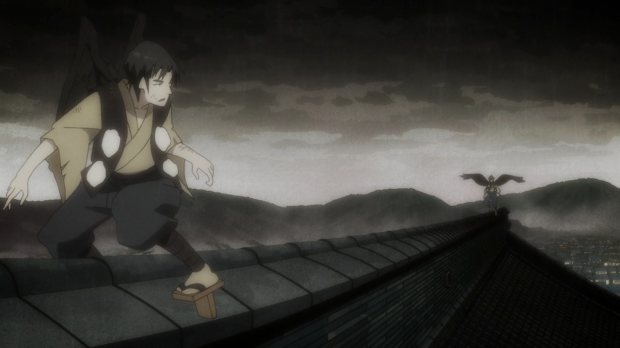 It’s extremely charitable to categorize Nidaime’s relationship with Professor Akadama as strained. There is a massive gulf between father and son and its creation is not something that we are privy to as viewers. The Eccentric Family is often cagey with narrative reveals, choosing precise moments for maximum emotional impact. Some things are never explained at all, but left to stew or simmer beneath the surface. Familial relations are hardly simple, and often no explanation is more impactful than providing exposition.

The reason behind this particular rift between father and son doesn’t really matter but the effect radiates outward regardless. Nidaime’s absence presumably begat Benten who ended up learning what Professor Akadama wanted to teach Nidaime in his stead. Whether Satomi Suzuki wanted to learn these things or not, she is now an influential force of tremendous power at all levels of this Kyoto’s tengu/human/tanuki hierarchy, likely as a direct result of Nidaime’s departure.

Unsurprisingly, Nidaime’s new mansion is one of Benten’s first destinations upon returning to Kyoto from her European vacation. While watching Benten square off against Nidaime in his own home — on his own late 19th-century chaise — we are treated to a closer glimpse of Nidaime’s temperament thanks to his interior decor. 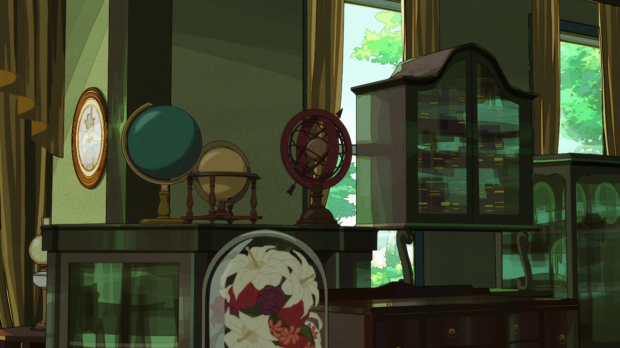 Ruffled cascades over hourglass drapery, an assortment of musical instruments that include a harpsichord, two harps, and a violin, an oriental rug, a bell jar filled with flowers that presumably do not age à la Beauty and the Beast — Nidaime’s new home is an odd museum of 19th century European romanticism on the outskirts of Kyoto. Lest we think that these decorations came with the house, Nidaime’s belongings were shown in Episode 1 during his hotel stay. He had already unpacked his tea set, bell jar, various globes, and other knick-knacks within his hotel room when Yasaburou visited Nidaime to deliver Professor Akadama’s letter of challenge.

His and Professor Akadama’s rooms couldn’t be more different. The small apartment inhabited by the professor is dirty, disorganized, and filled with discarded convenience store lunch boxes or empty bottles of booze. The only thing the two have in common are globes and maps on display. Nidaime’s decor oozes taste and wealth. All Professor Akadama’s apartment oozes is stale liquor, sticky and sour. Nidaime’s belongings are a physical version of Yaichirou Shimogamo’s bossy airs. Both wish to be recognized as greater — or at least as great — as their fathers before them.

Despite Benten’s recent European tour and physical absence from the first two episodes, this episode’s title, The Scent of Europe, refers more to Nidaime than Benten.

A long time ago, Nidaime went on his own “European tour.” We still don’t know exactly what happened between him and his father, or if Professor Akadama is his parent by blood. Nidaime could be a result of another human kidnapping situation, like Satomi Suzuki.

Benten’s relationship with the professor has always been ambiguous and complicated. Part child, part captive, and part romantic interest (from the professor’s point of view) she both resents him and cares for him. She still carries guilt from her part in his now flightless existence, and purposefully distances herself from him. It’s not difficult to think that Nidaime carries similar conflict in his heart towards his father, as shown by his appearance, actions, and interior design.