“People who know flower language will be able to interpret each one’s message and that’s great, but I made it so that even if you don’t you can feel something because of the shot’s layout or the flower’s color. I’m happy to let that audience have their own interpretation.”

This is the third and final post on Naoko Yamada’s use of flower language in her anime adaptation of A Silent Voice. It will focus on the movie’s specific usage of cherry blossom, or sakura, trees. A look at the use of daisies and cyclamen, and other miscellaneous flowers like azaleas, marigolds, and anemones have been covered in previous posts.

Due to their place in Japanese culture, cherry blossoms are ubiquitous in anime, from mere background trappings to Akari Shinohara’s title drop in Makoto Shinkai’s 5 Centimeters per Second: “The speed at which the sakura blossom petals fall, five centimeters per second.”

The quintessential visual shortcut for the Japanese mono no aware, cherry blossoms are of a rare, transient beauty that embody a sensitivity, pathos, or slight melancholy at the impermanence of all things. Brought into the cultural lexicon by literary scholar Motoori Norinaga’s study of The Tale of Genji, mono no aware has been traced back to Heian period literature — of which, The Tale of Genji is the most well-known and popular offering to this day.

On average, it takes a mere week for a cherry blossom tree to bloom before its petals inexorably fall to the ground. During this short timeframe, people flock to cherry blossom trees for food, drink, and an appreciation for humanity’s inability to solidly grasp the ephemeral beauty found in all things. After all, it’s the fleeting nature that gives meaning, not the object or creature in question.

Hanami, or this aforementioned custom of enjoying the fleeting beauty of cherry — and sometimes plum — blossoms also plays a large role in A Silent Voice.

Shoko Nishimiya and Shoya Ishida don’t purposefully set up a cherry-blossom viewing picnic together, but they do quite literally break bread together, feeding the koi in a nearby river from a bridge. This bridge is first framed by cherry blossoms during the time that the two first reconcile — after their initial reintroduction that Shoya forces before his suicide attempt.

While the shaky nature of their relationship is rooted in past mistakes rather than the more easily-understood passing nature of cherry blossoms blooming, falling to the ground, and dying, Shoko and Shoya’s relationship is ultimately made all the stronger due to the adversity that both characters had to face.

Although it seems heartless to say that, in order to have a stronger relationship they needed to break through their inability to communicate — and the after effects of Shoya’s abysmal bullying behavior — but A Silent Voice makes it abundantly clear that their struggle was necessary. There’s no “good” or “bad” person in the film, just a group of flawed people all failing to relate and understand each other, regardless of whether they were born with the advantage of hearing or not. Relationships, like most everything else, are transient as well. 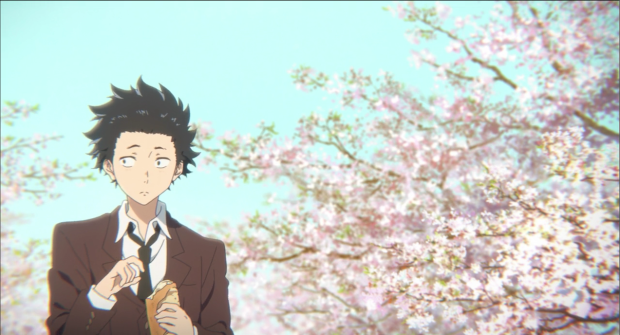 Cherry blossoms or flowering trees often frame Shoko and Shoya, but also play a large role in Shoya’s other relationships, most specifically his friendship with Tomohiro Nagatsuka. 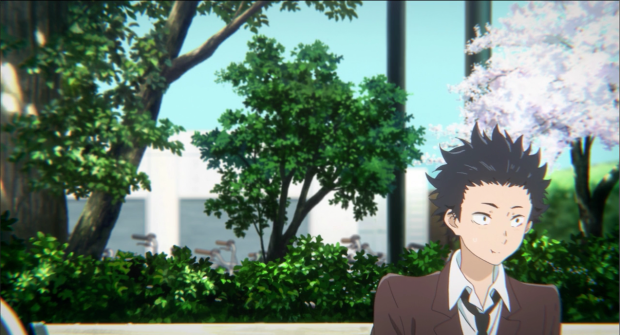 Nagatsuka takes the spotlight next to Shoya under the cherry blossoms while Shoya eats lunch and muses over how, or if, he should approach Shoko again. At this point in time, Nagatsuka is not recognizable as a potential friend — or even as a person — to Shoya. Since he bullied Shoko back in elementary school, Shoya has purposefully shut people out, denoted by the large blue “X” marks over his classmates’ faces.

Petals continue to fall when Shoya comes to the aid of Nagatsuka later on. Shoya approaches a school bully who is trying to steal Nagatsuka’s bicycle and offers his own in exchange. This interaction is viewed primarily at a distance as cherry blossom petals fall at their feet.

The blossoms give each of these encounters a feeling of chance and impermanence. What if Shoya hadn’t come to Nagatsuka’s aid? What is the difference in Shoya’s life following this interaction and how could it have turned out differently?

People try to put us d-down (Talkin’ ’bout my generation)

Just because we g-g-get around (Talkin’ ’bout my generation)

–My Generation, The Who

One of the more interesting choices insisted upon by director Naoko Yamada was the use of The Who’s My Generation. In her words, “I started wondering what Shoya was like at that point: a kid who feels invincible but also deals with perhaps unfounded frustration. This song appeared in my mind with a bang.” 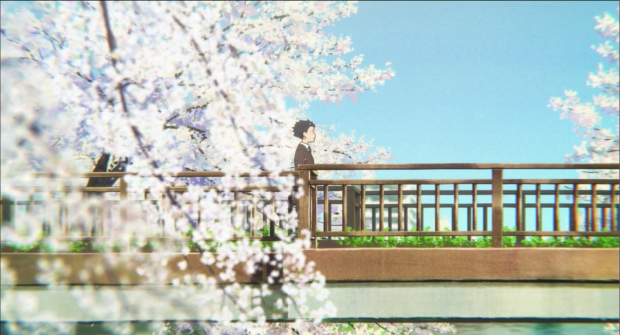 Cherry blossoms frame Shoya here as well. The lead-in to the My Generation flashback segment shows Shoya walking across the bridge to visit Shoko one last time before following through on his plan to kill himself. He doesn’t enact this plan, but that short scene of him walking across the bridge with Shoko’s notebook is yet another nod to the volatility and adversity present in their relationship. 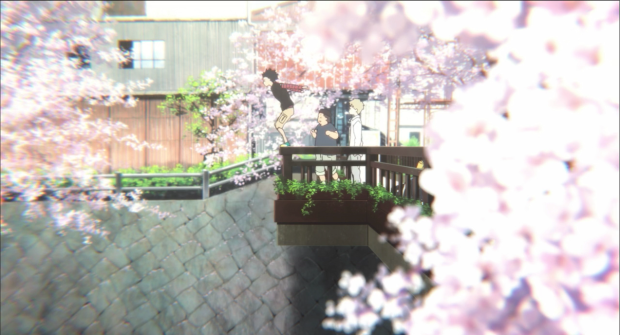 While the song cheerily plays during the flashback, the audience is introduced to Shoya and his two close elementary school friends, Kazuki Shimada and Keisuke Hirose, as well as classmates Naoka Ueno and Miki Kawai. All of these relationships, particularly his ones with Shimada and Hirose, are fleeting, their beauty forever entrenched in his youth, before he met and came to know Shoko.