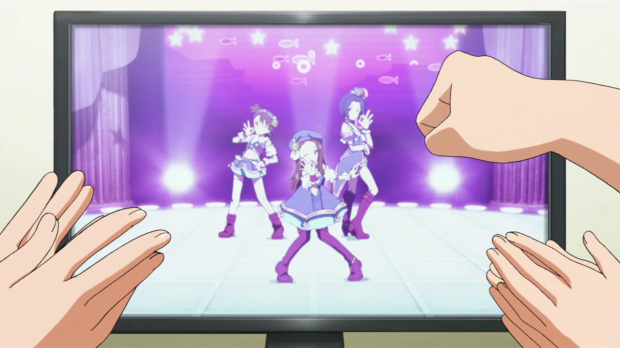 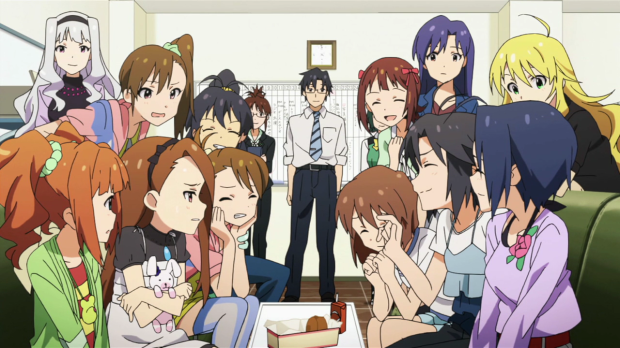 What follows is Producer’s misguided, manic attempts to force popularity onto the remaining girls. Through his mis-assignments we learn further tidbits about the individuals themselves — Yayoi is afraid of heights! Miki has pattern recognition that most idol trainees would kill for! — with a predictable lesson regarding attention to an individual’s strengths and weaknesses. When one of your idols has a mysterious personality sprinkled with bits of sagacity, perhaps you shouldn’t assign them to a cutesy goth-loli photo shoot.

By contrast, Ritsuko’s Ryuuguu Komachi is the anime’s example of finding balance. Ritsuko makes it clear that she specifically selected these three for how they would look and sound as a trio.

Interestingly enough, in the original Idolm@ster game series, Ryuuguu Komachi is formed out of necessity, not balance, due to scheduling conflicts with Iori and Azusa’s voice actresses, Rie Kugumiya and Chiaki Takahashi respectively. Separating Iori and Azusa into the Ryuuguu Komachi subunit ensured that the two could still be part of The Idolm@ster 2 even with their limited availability to record the game.

In the anime, this turns into a lesson for the bumbling Producer, as he learns something that Ritsuko already knew. Similar to the framing of the beach episode preceding it, Episode 6’s impromptu viewing party plays on audience expectations — Smoky Thrill is both a fun song and an animation delight — while also highlighting cause and effect through nuanced reaction snapshots.

The first snapshot shows Ritsuko firmly hugging her planner, which is filled with post-it notes tracking her subunit’s increasingly busy schedule. Behind her, out of focus, is the company whiteboard, which has also looked significantly fuller since Ryuuguu Komachi’s creation.

It’s obvious that Ritsuko has put a lot of thought and work into this project and this snapshot is partially an celebration of that effort along with a slight show of tension. Nothing is a guaranteed hit and although we as an audience know that Ryuuguu Komachi is likely to work out, a nod to taking this specific risk is appreciated. 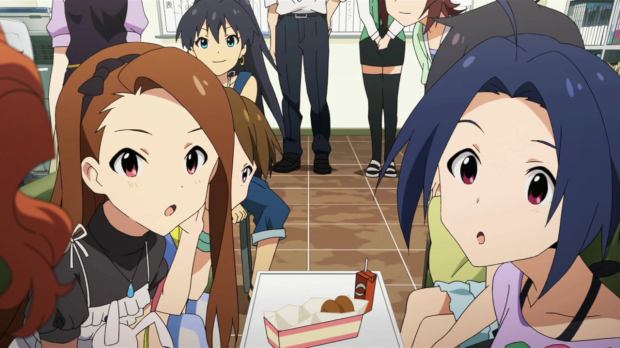 After another animation display, Azusa and Iori are shown saying, “Oo-h!” along with the performance onscreen. It’s second nature to them. At this point, they could sing and dance Smoky Thrill in their sleep.

This leads into a light-hearted laugh from Makoto Kikuchi. When she notices the intensity of Iori’s stare, her gaze quickly transforms to surprise. Perhaps it shouldn’t be such of a shock that Iori would take this so seriously, but Ryuuguu Komachi is a wake-up call for all of 765 Production. Producer’s earlier flailing aside, there’s a small sense that many of the idols were perfectly comfortable goofing off with a vague idea that they might be popular in the future. Iori, and Ryuuguu Komachi as a whole, shatter this illusion with an impressive final product in Smoky Thrill.

Next up is Ami Futami, who is shown tapping her right foot in time while watching herself perform. The camera pans up to show her twin sister, Mami, who is also moving her right foot with the music. How Mami feels about Ami’s sudden success with Ryuuguu Komachi isn’t something that The Idolm@ster explores in depth, but this display is a hint that Mami likely helped her twin practice to the point where she knows the routine as well. At the least, it’s a nice example of their bond as twin sisters. 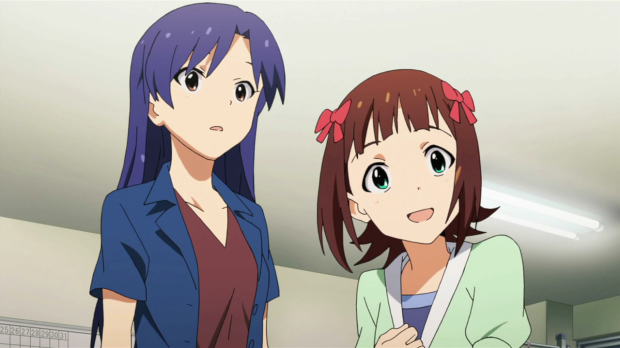 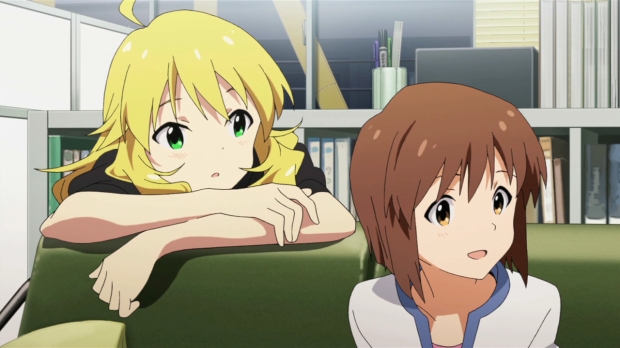 This series of snapshots ends with Yukiho Hagiwara and Miki Hoshii. Miki’s reaction is of particular interest. In this episode Miki has already expressed dissatisfaction that she wasn’t included in Ryuuguu Komachi while showcasing that, despite her laziness, she has no small amount of talent.

Miki’s outlook is selfish but oddly fair. She believes herself to be the best, so when others are selected over her, she wants them to prove that they’re better. Only then will she recognize their skill.

Although she is shocked at first, Miki’s expression slowly melts into a gentle acceptance. This isn’t the last time that Miki will have to acquiesce to another’s skill, and this scene creates an entry point into her character that the series will touch upon in later narrative arcs.

The scene ends predictably with all of 765 Production cheering at the performance while Producer acknowledges Ritsuko’s foresight in creating this specific subunit. Although that is the main focal point of this episode, it’s refreshing to see so many individual character traits of the various idols reiterated throughout this debut via cinematography.