Any story that follows the monomyth, or Hero’s Journey — as named and made popular by Joseph Campbell and his The Hero with a Thousand Faces — involves a return.

The return is one of the more important parts of a standard hero narrative, since it’s at that point where the hero must not only eschew the place (physical or metaphorical) of where they received enlightenment, but is tasked with gifting that knowledge to the unenlightened. Arguably, bestowing that wisdom upon everyday people in their everyday world is the very thing that makes them heroic.

For example, in the post-apocalyptic short story By the Waters of Babylon — which I’ve referenced before in relation to Made in Abyss — John returns to his father and tribe with important knowledge of the civilization that preceded their own. Although his father cautions him of dumping too much information on the uniformed, the realization that what he thought were gods were actually mere humans who destroyed their own world is what inspires him to say that they must rebuild. His realization and return likely spark a period of growth and industry.

Made in Abyss‘ second episode is also the start of Riko’s journey as the hero of the main narrative, but it also has some fascinating commentary on the return itself, through the structure of the Abyss. 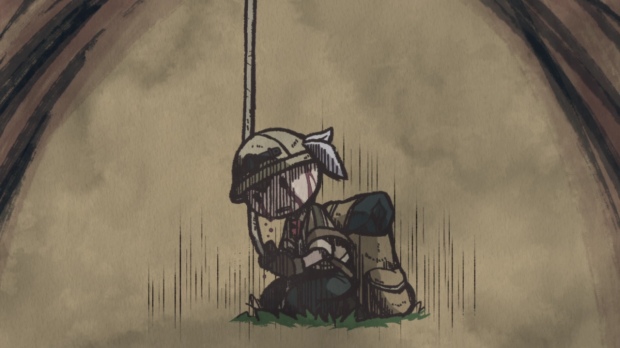 “Assuming that’s true, then what did I come up here to do?”

-Reg to Riko after she insists that, as a robot, he can withstand the Curse, Made in Abyss, Episode 2

With the aid of cartoonish, and somewhat gruesome, illustrations, Shiggy outlines the Curse of the Abyss: It’s not the descent that will kill you, but the ascent. In other words, a human excavator can go as far into the Abyss as they want, but when they try to return, they will fall ill with anything as innocuous as a mild headache to the loss of their humanity.

In the monomyth, crossing the return threshold is figurative — although it can be presented as a literal border crossing between worlds — but difficult. How do you share the wisdom you’ve gained with no material proof? Returning to John in By the Waters of Babylon, how will he convince others in his tribe that the gods are humans? How can he translate his epiphany at The Place of the Gods into something that they will understand?

Excavation in Made in Abyss is literal, but the comparison is interesting. Out of sheer curiosity, people commit their lives to uncovering relics in the Abyss, enchanted by its possibilities and mysteries.

Of all of these excavators, none have been as successful or revered than Riko’s own mother, Lyza the Annihilator. Made in Abyss‘ second episode gives us her “death” or Resurrection Day. Her life is celebrated as her White Whistle, a mark of her excavating prowess and achievements, was sent along with a series of notes to a sentry point.

In this same episode we, and Riko, learn that Lyza gave birth to Riko in the Abyss, and risked her life to bring Riko to the surface unharmed (vision problems aside). For that particular excavation, Riko was the gift, or relic, with which Lyza returned to the surface. Riko was such a valuable gift, that Lyza also sacrificed a relic in service of returning her from the Abyss.

Upon Lyza’s “return” — the arrival of her whistle back in Orth — it’s also stated that Lyza’s whistle is unique and carries with it her soul. These gifts, the whistle and the documents, are presumably meant for her daughter Riko. If she herself cannot return from the depths of the Abyss, Lyza did her best to return as much of herself and knowledge as possible.

Tying together Reg’s appearance and Lyza’s resurrection are the notes that she sent along with her whistle. These documents contain drawings of Reg and a letter, presumably for Riko: At the netherworld’s bottom, I’ll be waiting. Presumably, Lyza has finally traveled too far into the Abyss, unable to return heroically like she has so many times before.

It’s also difficult to ignore that, in the series’ first episode, Riko is bewildered at how far up in the Abyss a crimson spitjaw creature appears. Combined with the fact that the “loss of humanity” image looks suspiciously like a crimson spitjaw, it’s easy to imagine wild theories like that crimson spitjaw specifically was Lyza, attempting to return from the depths of the Abyss. Although this is not likely the case, the crimson spitjaw’s arrival is a bit too coincidental in timing with Reg’s sudden appearance and, later in Episode 2, Lyza’s resurrection.

The moment that Riko yells for help in Episode 1, Reg’s beam drives the crimson spitjaw away. With Reg featured in the documents themselves, it’s not a large leap to assume that Reg himself is a gift for Riko, one last gift from her mother, until Riko can find a way to meet Lyza in the Abyss or return Lyza to the surface.

As a robot, Reg can withstand the ascent and be at Riko’s side when her mother cannot.