-Reg to himself, Made in Abyss, Episode 5

Thus far, Made in Abyss has followed the standard storytelling structure of the monomyth or The Hero’s Journey exclusively.

Riko is a young orphan who is learning to be a cave raider. In the second episode of the series, she learns that her mother — who is famous in their community for her explorations of the titular Abyss — is effectively dead. During the celebration of her mother’s life Riko learns from her teacher, Leader, that her mother Lyza gave birth to her in the Abyss. To quote another narrative that follows this tried and true formula, this is Riko’s “You’re a wizard, Harry” moment, her Call to Adventure.

What little we know of Riko up until that point is that her curiosity has always bested her, for better or for worse, but Leader’s story ensures that we, the audience, know that Riko is special. Essentially, Leader marks her as the series’ protagonist. He also plays the role of Riko’s Supernatural Aid. Leader is her guardian who knows a great deal more than he lets on, and seemingly parts ways with Riko willingly, even sneaking in last bits of information and copies of the letters Riko received from her mom.

The Abyss itself acts as a visual representation of their journey, combining the Crossing of the First Threshold and the Belly of the Whale in Riko and Reg’s exploration of the first layer.

Just as the journey of Little Witch Academia isn’t Akko Kagari’s alone, it’s also the story of Diana Cavendish despite the latter character’s fewer hours onscreen, Made in Abyss isn’t solely the story of Riko. Instead, it blends two journeys of self-discovery into one. The individual narratives of Riko and Reg the robot both unfold as they make their way into the Abyss, despite the fact that Riko has been given more focus.

Although it’s not a one-to-one fit like Riko’s story, this narrative structure can also loosely be applied to Reg. Reg appears in the first layer of the Abyss with no memory of where he came from or who he is. After careful exploration, and no small amount of invasive experimentation, Riko determines that Reg is a robot, and likely a relic of the Abyss. Their journey together into the Abyss is Riko’s quest to find her mom, and Reg’s quest to discover himself. He splits the difference between protagonist and object of aid.

Reg’s existence isn’t a mere catalyst, or an object sent by Lyza to help Riko on her journey. This is Reg’s story as well.

Reg takes more of a main role in the series’ fifth episode, when Riko falls ill from the curse of the Abyss after an attack. It’s again up to Reg to save her life. Easy comparisons are drawn between Riko’s intelligence and societal upbringing but generally poor constitution, and Reg’s physical strength but lack of awareness or mental fortitude.

As a newcomer to the societal mores, rules, and general knowledge of the Abyss, Reg also acts as an audience insert, drawing lines between who knows what. Although Riko knows far less about the Abyss than her mother or Leader, she knows a lot more than Reg, and this becomes invaluable throughout their journey.

In this way, their roles are sometimes reversed. Rather than Reg being sent as a gift to Riko for her journey, Riko is a gift to Reg on his journey because she provides him with necessary knowledge and training that he does not have. 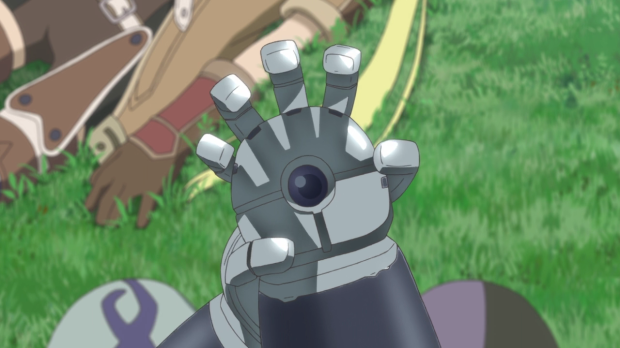 Their differences don’t begin or end here. Reg is framed as more human and emotional than Riko, despite the fact that he is a robot or a relic: A being that would traditionally be portrayed as unfeeling or without emotional comprehension.

He acts shy and embarrassed when he has to strip Riko naked, where Riko had no qualms about exploring Reg’s body in an emotionless, scientific manner upon discovering him. He is terrified of his own power — shown wonderfully by the trembling of his metal hand, complete with sweat at the joints — where Riko is awed, and even explains to him logically why she automatically believes that he can control it. He is initially squeamish about eating the meat of a Corpse Weeper because it feasts on dead humans, where Riko heartily digs in, stating that it’s a way for former cave raiders to help sustain their living brethren.

Even prior to this episode, Reg wore his emotions more openly. For example, he bothered to say goodbye to Kiyui before they left. 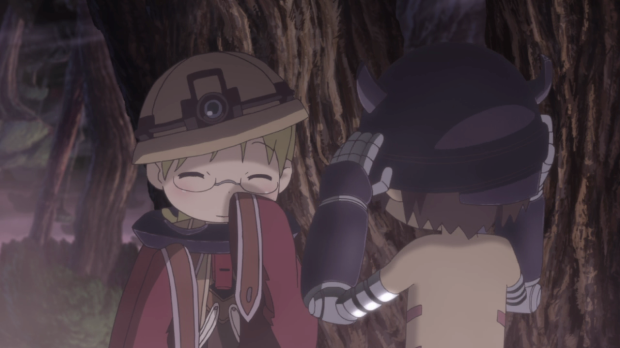 When considering Riko and Reg, Reg the robot has more stereotypical human qualities than Riko, the actual human.

While it’s easy to attribute Riko’s lack of emotional awareness solely as a result of her upbringing — it’s certainly part of it — recalling the characters of Nat, Shiggy, or even the Black Whistle Habo reveals that Riko’s character is just as much nature as it is nurture. This could be a nod to her mother, Lyza, who was said to have had a difficult time adapting to regular human life. Riko always wanted to follow in her mother’s footsteps, and she might emotionally be closer to her mother than she ever could have imagined.

As for Reg, he’ll be relying on Riko’s mental fortitude while continuing to showcase his physical capabilities. If Lyza really did send Reg as a guide for Riko, she couldn’t have picked a better person for her daughter than Reg.