Of all gems, Diamond (Dia) is the most visibly treasured by their peers. This is thanks, in large part, to Dia’s beauty, but Dia also has a sincere, genuinely nice personality that’s difficult to defy. Even when the most irreverent of all the gems, Phosphophyllite (Phos), jokes that Dia is too blinding, this is later followed up with a statement that Dia doesn’t have to change, their kindness is enough.

By examining the daily life of humanoid gems, Land of the Lustrous muses on the meaning of a life, survival, living, and purpose. No individual story is as heartbreaking or as complete as Dia’s journey by series end, giving ample fodder for discussion. 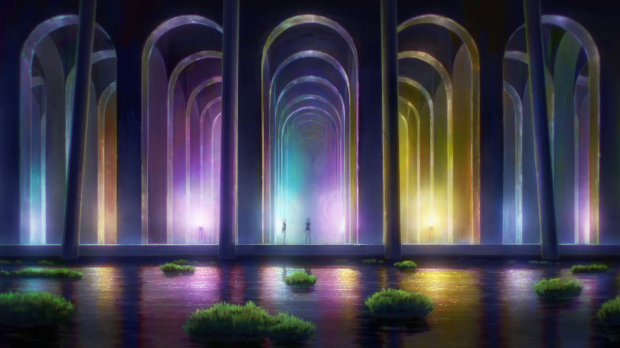 If the statement that Dia’s “kindness is enough” sounds familiar, it’s because it echoes what Master Kongou says about Cinnabar: “just living is enough.” Neither Cinnabar nor Dia are willing to accept this. Cinnabar desperately wants to be closer to the other gems, but creates a meaningless job and stubbornly continues a forced isolation. Dia wants to be as strong as their combat partner, Bort.

To Dia, Bort is perfection. Dia’s insecurities are exacerbated by the fact that Bort by nature is more physically perfect, despite the fact that both gems are diamonds and a 10 on the Mohs hardness scale. Roles and physical makeup of the gems are absolute (save Phos later in the series). Where Dia is treasured for being beautiful, Bort is who the gems call above all others in a fight.

This places Dia and Phos in similar positions, even if neither realizes it because they’re too busy envying the other. Arguably, Phos is just as treasured as Dia. As the youngest of the gems, Phos receives a lot of teasing and harsh words (most of which are deserved given Phos’ laziness) but no one hesitates to search for Phos or protect them in the face of danger. Phos begins the series wanting to fight, because they feel it’s the objectively “best” job. Dia begins the series wanting to change because of their inferiority complex.

Only one of them actually changes.

In Land of the Lustrous‘ third episode, Phos spends an episode “transformed” into a snail. A precursor to the gem’s future physical transformations, it’s not actually a transformation at all. The snail is Ventricosus, king of her people, the Admirabilis. Dia rushes from gem to gem, ferrying Ventricosus with them all while insisting that the expressive snail is Phos itself despite the fact that such a transformation would be impossible.

-Dia to “Phos,” Land of the Lustrous, Episode 3

Dia’s actions and insistence that the snail is Phos could easily be written off as another example of Dia’s kind nature. Yet this would ignore another facet of Dia’s personality that is just as important: their faith. The idea that Phos could transform from a gem into an organic creature is ludicrous — as Cinnabar points out after Dia dragged the snail around all day — but Dia desperately wants to believe that such a transformation is possible.

When Phos begins the job search for Cinnabar, Dia is one of the first gems Phos consults due to Dia’s own search for new fighting techniques. There aren’t a lot of “new” things that appear in the life of a gem, and each gem is sorted into the job that suits them best. Rutile is the doctor. Jade is the secretary. Red Beryl is the costume designer. Since gems are immortal and unchanging, Land of the Lustrous implies that these jobs are for life. Phos is given the job of compiling an encyclopedia but rejects this and wants to fight, despite their laziness and physical weakness (Phos is only a 3.5 on the Mohs scale).

Dia is a fighter but not the best fighter.

“Why not start from changing from within? You could try doing things you don’t normally do.”

Dia to Phos, Land of the Lustrous, Episode 2

When Dia believes Phos to be transformed into a snail, they despair at the fact that Phos took the above advice to heart. Yet, the reason why Dia believes in Phos’ metamorphosis so easily is because they also want it to be possible. Of all the gems aside from outliers like Phos and Cinnabar, only Dia even mentions change as something that’s achievable for a gem. Phos does change eventually — first when they lose their legs and again when they lose their arms — fulfilling Dia’s own wish. This affects Dia directly when Bort asks Phos to pair up, inadvertently discarding Dia. 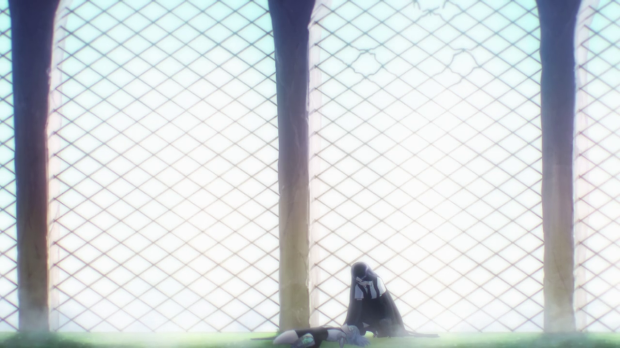 “Bort is never wrong. And always, always makes the right choice. Sometimes, I almost hate it.”

-Dia, Land of the Lustrous, Episode 10

Dia accepts Phos taking their place almost immediately, going as far to say that it’s their fault for suggesting that Phos change. Later, Dia states that Bort is never wrong and always right, giving the other gems a small glimpse at Dia’s feelings of self-loathing and inadequacy. Yet, in that same episode, Bort makes a series of poor decisions that unintentionally lead a dangerous new type of lunarian directly to Dia, putting Dia into a horror-movie like chase sequence in the gem’s own base. The idea that Bort is infallible comes from the fact that they are undeniably the strongest fighter, but it’s also a reflection of how Dia sees Bort, compounded by the fact that since the gems cannot change, a rigid stratification exists in their society.

At the end of the episode, both Dia and Bort realize the error of their respective ways. Dia’s personal story comes to a close when they accept that Bort loves them and they express their love to Bort. In turn, Bort’s superior fighting ability is put to good use with a rotation of partners so that Bort can teach each gem how to improve their strength in a way that fits their physical aptitude and limitations. It’s a lesson that no one, not even the strongest gem, is flawless. Dia does undergo a change from within after all, it’s just not reflected in their physical appearance.