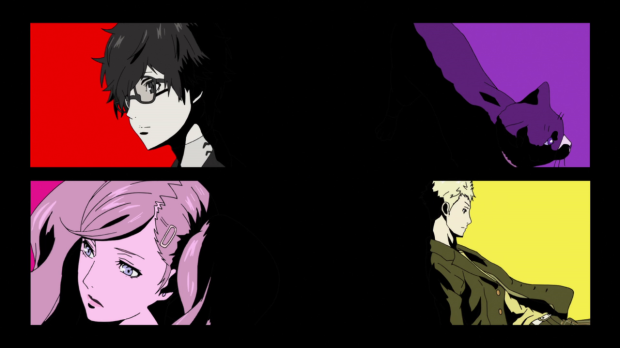 The opening moments of the Persona 5 video game set the player’s expectation for a stylish, visually-immersive experience. Sayo Yamamoto’s opening animation showcases callbacks to her work on the short Endless Night, and later Yuri!!! On Ice, with fluid figure skating and a limited color palette of black, white, and red that reflects the game’s UI design.

Masashi Ishihama’s opening sequence, which debuted during the fourth episode of Persona 5 The Animation, is the perfect combination of Ishihama’s strong sense of color and the game’s aesthetic. Opening with an MTV-like logo on an old television screen (in tried and true Persona fashion) the animation quickly makes use of Ishihama’s visual transitions. These again call back to the game’s attention to detail when it comes to color and integrating pop-up menus into the everyday life of your Persona 5 protagonist — Ren Amamiya in the anime.

Adapting the story of a video game into an animated television series is always a tricky task, and the nature of the Persona games makes this even more difficult. The best anime adaptations of original source material — games, manga, novels, light novels, etc. — strike a balance between integrating certain thematic elements visually in lieu of experiencing them through gameplay, or digesting them via descriptive paragraphs. They know what details to cut, and what details to keep in (especially for marketing purposes). Often, this requires narrowing the focus of certain plot elements while retaining the feel of the general narrative, tapping into the emotions experienced while playing or reading the source material.

A spinoff of Shin Megami Tensei, the Persona series is a sprawling combination of dungeon-grinding, visual novel-like social links, and Jungian psychology references. Persona 5 is the longest game of the franchise (and had plans to be even longer, with the addition of Hifumi Togo as another member of the main cast) with over 100 hours of gameplay.

While playing Persona 5, I was struck by its indignant, stewing anger. The game is undeniably Japanese in scope, but can resonate with anyone who has ever wanted to strike back against systemic injustice but doesn’t quite know how. It can be  tone-deaf at times, hampering larger narrative arguments with tasteless one-liners (Ryuji Sakamoto post-Kamoshida’s palace). But for the majority of the series, it taps into existing frustrations with societal problems that feel too big to tackle on an individual level. Persona 5 does well to begin with a narrow scope on a smaller subunit of four in what ends up as a larger main cast of nine, not including social links.

Nowhere is the Persona 5 game more intense or emotionally-resonant than in its first story arc about former Olympic gold medalist, Suguru Kamoshida, whose arrogance has taken over an entire high school. When tackling larger, nebulous concepts of systemic social problems, they can often seem too big or too distant. The smaller cast of “Joker” (Ren Amamiya), Ryuji Sakamoto, and Ann Takamaki makes it easier to focus on how these individuals’ every day lives are affected by societal issues well beyond their control — until they fight shadows in the heart of their immediate tormentor, Kamoshida.

The oppressive atmosphere of Kamoshida’s Palace and Shujin Academy is felt at every moment in these first few hours of the game. Kamoshida is aided by his higher-ups and peers, who look the other way as he abuses and assaults students, provided that he continues to give the school a good reputation through the volleyball team’s national results. In addition to larger, obvious cases of sexual harassment and Shiho Suzui’s suicide attempt, there are small details that ensure Ren and company are kept under the thumb of Kamoshida and his ilk while they’re inside Shujin’s four walls. When Ren wanders the halls of Shujin, whispers of his juvenile delinquency follow. Worn-out teacher Sadayo Kawakami laments that she has to deal with him at all, not out of malice, but world-weary annoyance.

Talking to NPCs often proves fruitless as Shujin students, even if they don’t agree with it, side with the status quo, and aren’t aware of the nature of Ren’s “crimes.” Ren was falsely accused by a political figure when Ren tried to save a woman from being sexually assaulted, but because he was the less powerful party, ended up with a record. Ren’s compatriots all have similar experiences with finding themselves on the wrong side of a person more socially powerful than themselves, and often are unfairly regarded by their peers due to a lack of knowledge, or desperate attempt to avoid drawing attention to themselves. The nail that sticks up gets hammered down, and so on.

These small details woven into the fabric of the game are what make the Kamoshida arc so complete. It’s only natural that as the story continues, it expands in scope and size. Like any story that widens its scope, Persona 5 sometimes loses sight of the simple narrative and individual focus the Kamoshida arc so potent. At no point again is the game as oppressive.

All of the meandering praise for the Kamoshida story is ultimately in service of my own, futile desire to see an 11 or 12-episode series of just the first Persona 5 arc, rather than the somewhat rushed four episodes that we received in the anime adaptation. Given the marketability and popularity of other main characters, it’s easy to see why the anime wants to include every arc, yet there’s arguably a strong, separate anime to be made for each palace narrative, especially Kamoshida’s. (As an aside, the other one I’d really love to see would be Futaba Sakura’s, since that arc is also deeply personal to her character.)

Although at first glance, this may seem too long, but there are a lot of details that the series pushed through or ignored that could easily add to the feelings of helplessness that the Kamoshida arc inspires. One of these is the effect of Ren’s leaked past at Shujin Academy. We didn’t experience the oppressive school environment that was palpable in the game. Similarly, Ann’s relationship with Shiho could have been expanded upon, and Ryuji’s own experiences with his former track teammates and Kamoshida could have also been addressed in more than a few fleeting instances. Kamoshida himself comes across as immediately awful in the anime, where the game is initially cagier about concealing his atrocious behavior. Most of his cartoonish villainy in the game is saved for his palace shadow. One of the reasons why Kamoshida has been able to get away with this for so long is that he’s outwardly a good face for the school.

I’m not suggesting keeping every detail from the game, but the anime’s choice of which details to include and which to leave out has been a bit odd. Thus far, Persona 5: The Animation is serviceable. Ishihama’s aforementioned opening is stunning and shows a strong understanding of the game’s aesthetic. However, when it comes to interpreting and adapting other pieces of the game, especially during palace fight scenes, the slavish dedication to certain details obfuscates the emotional narrative.

When Kamoshida later confesses his own crimes and faults to the entire school in the anime, its still wonderfully cathartic, especially when Ann confronts him, telling him to face his faults rather than killing himself. However, I can’t help but wonder how much more emotionally affecting it would have been if we knew Ann, Shiho, Ryuji, and even Kamoshida a bit better.