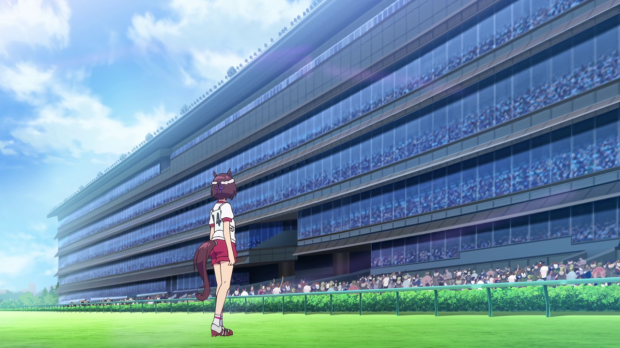 “Horse girls. They were born to run. They inherit the names of horses from another world, whose histories were sometimes tragic and sometimes wonderful, and with that, they run. That is their fate. No one knows how these horse girls’ future races will end.”

In outlining the basic premise of the series, the opening of Uma Musume Pretty Derby raises more questions than it does answers. There are no horses, only horse girls and women. The souls/spirits of horses from another world (ours) impregnate women (it’s unclear as to whether this only happens to existing horse women or at random) who give birth to horses with predetermined names. Uma Musume mentions that their namesakes’ pasts were tragic and wonderful, but also implies that the horse girls of their world can defy these fates. Their only fate is to run.

It would be best not to think too deeply about this. Yet, because the show follows the lives of some of Japan’s most popular and successful racehorses and has, thus far, been true to most of their histories, Uma Musume offers a somewhat unique study in sports anime.

There are many different types of determinism, but the overarching idea is that the future is already determined by a causal chain of events in the past. This distinction differs from fatalism, which has a broader definition but focuses more on an inescapable fate rather than what came before. With determinism, human actions in the future are somewhat fixed by past events (usually, but not necessarily, and uninterrupted causal chain). With fatalism, humans have a set fate that’s not necessarily determined by prior actions and is often attributed to a gold-like, omnipotent being who sets said fate.

In the case of Uma Musume, the horse girls’ fates are decided by causality, but that causality is the history of the original Japanese racehorses. This goes beyond nominative determinism, which is a recent hypothesis that people gravitate towards careers that suit their names. It’s biological in a way — each horse girl inherits the name of a racehorse — but the opening of the series stresses that no one knows how their races will end.

Sports anime often rely on a series of tropes, especially ones established by older adaptations like Aim for the Ace! that revolve around an underdog, self-improvement, and overcoming hardship with 頑張る spirit, the latter of which deserves nuance and a multi-faceted look all its own. Tropes aren’t bad, they’re just another part of storytelling. Yet, sports anime can seem rote, uninteresting, and predictable because of them. The events are predetermined and the audience is primed to understand what will happen based on prior sports anime and manga. It’s the job of the series to ensure that the journey to that end goal is interesting.

Uma Musume‘s leading horse lady, Special Week, and powerhouse El Condor Pasa meet in the Japanese Derby (Tokyo Yuushun) in the series’ fifth episode, “The Derby With Rivals.” The anime version of this race is commentated by legendary jockey Yutaka Take, whose first derby win came on Special Week in the real-life 1998 analogue. Foreign-bred horses were not allowed to run in the Japanese Derby until 2001, so El Condor Pasa was never in this race. Uma Musume pays tribute to El Condor Pasa’s dominance and the rise of Special Week by awarding them a dead heat, tweaking their history in a way that makes sense.

For the horse girls of Uma Musume, there is an added layer of determinism that comes from their names. Thus far, the series has followed the historical results of their horse counterparts as closely as possible, only making changes when necessary, like adding El Condor Pasa to the Japanese Derby and Tennou Shou, or changing Montjeu’s name to Broye, presumably due to licensing issues. Special Week’s weight gain and loss to Seiun Sky Haru Urara still loses all of her races. Gold Ship is temperamental and excellent. Grass Wonder still recovers from an injury to win the Takarazuka Kinan over Special Week.

In the 1998 Tennou Shou Silence Suzuka’s career was ended by an unlikely injury. He was euthanized because of it. Uma Musume does not take this route — you could even make a biological argument that horse girls, due to a human leg structure, would heal far more easily than a horse — and instead gives Silence Suzuka a rehabilitation schedule, aided by Special Week and the other members of Team Spica. Events that happen around or after Silence Suzuka’s injury still follow real-life events. Special Week loses to El Condor Pasa and Air Groove in the Japan Cup, and later loses to Grass Wonder in the Takarazuka Kinan.

The race outcomes in Uma Musume suggest that, outside of Silence Suzuka’s rehabilitation, the destinies of these horse girls are fairly fixed by real-life events. It’s an odd determinism that plays with what many anime viewers expect from sports series. The horse girls don’t know their own destinies, but we can look them up and learn. Half of the fun in writing this was researching the real-life counterparts of the Uma Musume horse girls, and learning how their individual personalities are portrayed in small details like Gold Ship’s unpredictable temperament or Oguri Cap’s love of food. Like most sports anime, Uma Musume is at its best when it adds its own version of what happens behind a win or a loss, like Special Week’s over-attention to Silence Suzuka’s recovery, or her visit to her mom in Hokkaido.

And if the thought that these girls are simply living out predestined lives of racehorses gets you down, you can always watch Gold Ship’s virtual YouTube channel.