“I’ve always had my eye on you.

Seeing you let me leave my loneliness behind.

But the moon bites back its laughter again tonight.

Won’t you turn my way?

It’s no coincidence that Shoujo ☆ Kageki Revue Starlight‘s ending song, “Fly Me to the Star,” can sound like both a romantic confession or a plea from a fan for a star to look their way. Top stars of the Takarazuka Revue have massive individual fanbases. Part of the Takarazuka appeal is going to see your favorite star onstage, and top star candidates are evaluated not only on their physical attributes and talent, but their stage presence and marketability. Within Revue Starlight, this is a reminder that the trainees shown are not only revue trainees but also fans of each other, in a way — the manner in which the trainees approach Maya Tendou is another example of this.

It’s also no coincidence that Hikari Kagura stars in the first rendition of the ending sequence. She might seem like an odd choice, especially for the third episode — “Fly Me to the Star” was not featured as the series ending in Episodes 1 or 2 — because there’s so much focus on Karen Aijou’s defeat to Maya. Yet, this is also the episode where Nana “Banana” Daiba announces that she’s going to be doing more on the production side of things, and where Hikari first truly reaches out to Karen, albeit only to slap her in the face.

Since the big reveal of Banana’s titular episode, there has been no small amount of speculation that Hikari doesn’t actually exist. She’s a ringer or a balancing element — a catalyst, brought in by the giraffe to restore balance to the revue stage, which has been monopolized by Banana since her first victory as the top star. Banana’s time loops have held the revue in thrall for long enough and Hikari’s arrival is a harbinger of change.

It could still turn out that Hikari was fabricated and Karen’s memories are false, or something in Revue Starlight will later necessitate her disappearance, but “Fly Me to the Star” tells us not only does Hikari exist, but that she has deep feelings for Karen that have nothing to do with Banana’s time loop.

Hikari’s first rendition of “Fly Me to the Star” is a solo version, featuring her, her stuffed bear, her blue suitcase, and the script to Starlight (which features prominently in all iterations of the ending sequence). The entire sequence is melancholy and Hikari seems distant from the subject of her confession (Karen). It ends with Hikari onstage in position zero, alone.

After Hikari and Karen talk to each other, revisiting their shared past inspirations, promises, and how they’ll move forward together, “Fly Me to the Star” is revealed as a duet. There’s a direct comparison between Hikari’s solo version and her version with Karen with the latter a more lively affirmation. This time, Karen sings to Hikari about how she’s always admired her with Hikari backing her up before the two sing together. Then Hikari takes the lead at, “I’ve never been able to tell you how I feel. I’ve sung the songs of so many other lives onstage instead.” It ends with them standing together, looking at each other across position zero. 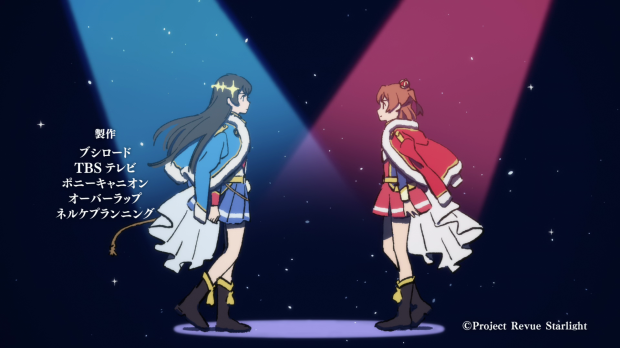 The message is that Hikari cares very deeply for Karen, in a way that would make a reveal that she’s a catalyst designed by the giraffe to break Banana’s time loop a bit cheap. The core of Revue Starlight is the strong relationships (friendships, romance, and everything in between) that are formed during the trainee period and inspire these young women to push forward — or in Banana’s case, stagnate. Despite her aloof nature, Hikari remembers Karen’s promise and draws on it for inspiration. Her lines in the “Fly Me to the Star” duet version with Karen reflect this just as much as her actions towards Karen in the series itself. If anything, it points to the fact that Hikari arrived to save Karen from the time loop because she loves her. Karen can’t fulfill their shared promise if she’s frozen in time.

Other iterations of “Fly Me to the Star” reveal nuances in the other stage girls’ relationships with each other, themselves, and the revue. Kaoruko Hanayagi and Futaba Isurugi also share a duet ending version. Similar to Hikari and Karen, their episode reaffirms their relationship and how it relates to the stage. For Kaoruko and Futaba, it’s less about simply remembering old promises and more about revisiting their longstanding relationship as they grow individually. Kaoruko’s performance has stagnated while Futaba has put in tremendous amount of effort to improve. After airing out their respective grievances, they come together onstage in the revue duel and in the ending sequence. Like Hikari and Karen, they face each other over position zero, with their spotlights crossing.

Mahiru receives a solitary ending, similar to Hikari, but it’s much more uplifting than Hikari’s because of Mahiru’s individual narrative. In her standalone episode, Mahiru confesses her feelings to Karen, but they’re mired in her own self-loathing and loss of inspiration. Her trajectory is less about her love of Karen and more about rediscovering her own ambition to study at Seisho Music Academy and what kind of performer she wants to be. 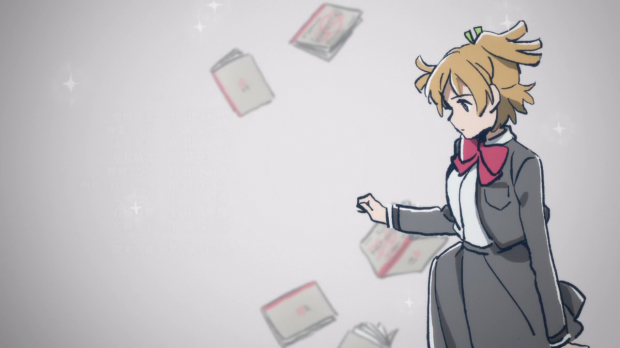 Every iteration of “Fly Me to the Star” features a Starlight script in the background, which brings us to Banana’s version of the ending sequence. The story of Starlight has been used as a framing device since the first episode. It’s both a way forward and a quagmire rooting the young women in place. Starlight repeatedly says that only one stage girl can stand at position zero: only one can be top star. It reinforces the status quo. As the 99th’s troupe’s upcoming performance, it also offers a framework to break that status quo by changing the script. Karen and Hikari’s promise alone flies in the face of allowing only one performer to claim position zero. Standing in their way is Banana.

Banana takes Starlight‘s framework one step further. Her iteration features nothing but Banana herself, the giraffe — arbiter of the revue, and Starlight scripts. She can’t move past her first Starlight stage with the 99th troupe, and through winning the revue duels, keeps everything frozen in time, repeating that stage countless times before Hikari appears. Her version of “Fly Me to the Star” is silent. Stuck in time, she isn’t looking forward. She doesn’t recognize the harm her actions are causing to the people she claims to be trying to help by keeping them in a time loop. Banana has no one to sing to, therefore she doesn’t sing at all. She thinks she’s already found the perfect stage. Unlike all other iterations of “Fly Me to the Star” Banana stands on the star, rather than reaching for it.