To be chosen as a Takarazuka Revue trainee is part physique, part talent, and part effort. The audition includes singing, dancing, and sight-reading, much of which cannot be prepared in advance. No amount of effort and talent can make up for factors like natural height or charisma. And the audition is the easy part. Young girls, not women, are chosen and developed into Takarazuka actresses through a strict training regimen that doesn’t stop when the lessons themselves — usually six-to-seven hours, six days a week — end.

First-years have it particularly rough. They have to clean the school extensively in addition to their lengthy classes in anything and everything from singing and dancing basics to drama, koto or shamisen, music theory, and drama. They cannot wear makeup or style their hair — it must be cut or braided. Previously, the Takarazuka curriculum included sewing, English, and etiquette lessons, all in service of Takarazuka industrialist founder Ichizo Kobayashi, who saw the school not only as a tourist opportunity, but a training ground for Japan’s future wives and mothers. Members of all classes must adhere to a strict hierarchy, including addressing their elders properly at all times, with precise language and greetings. When an older student approaches, they much bow and move out of their path.

The cycle repeats in the revue itself, where first-years in the troupe are more stagehands and small ensemble roles than full-fledged Takarazuka actresses. At this point in time, they already will have been separated as an otokoyaku or musumeyaku as well, and their entire time period with the troupe will be spent taking parts of one role or the other. During their time with the troupe, they cannot marry or have romantic relationships. All of this sacrifice and still only one otokoyaku per troupe can be top star. This is all in service of not only becoming the best but, in the words of Shoujo ☆ Kageki Revue Starlight‘s Maya Tendou, becoming a dream. The Takarazuka Revue provides inspiration and a respite from every day life for young women all over Japan. 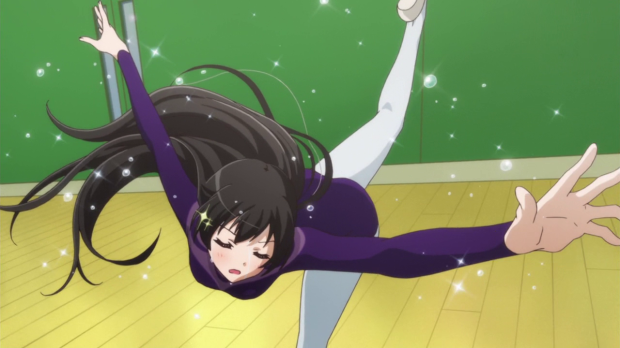 Everything goes well for Hikari Kagura initially at the prestigious Royal Academy of Theatrical Actors in England. When she describes her curriculum, it echoes the traditional Takarazuka schedule. She happily works hard, always reminded of the promise that she shares with Karen Aijou from Karen’s letters, her hairpin, and the same photo on her desk that sits on Karen’s desk at Seisho Music Academy. Hikari’s name not only means “light” but she embodies this from within through her efforts, earning one of the leads in the Royal Academy’s upcoming stage performance.

Her radiance is quickly recognized by the giraffe, who recruits her for the revue duels by promising her a fated stage. Where Nana “Banana” Daiba’s fated stage was the same first-year production of Starlight, Hikari’s is one where she shares the spotlight with Karen. Hikari defeats opponent after opponent, shooting up the rankings while continuing to outshine her peers in lessons and onstage. 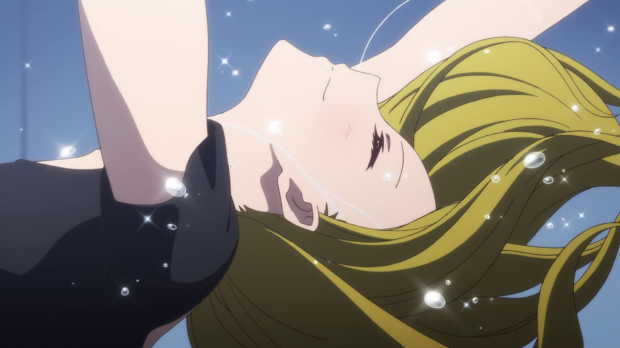 Judy quickly dispatches Hikari in their duel, placing Hikari firmly in second place. Hikari is not the same after the loss and feels herself falling further behind, leading to a mistake onstage in their performance.

Similar to Banana, Judy is naturally predisposed to becoming a top star. Despite no small amount of talent, Hikari is not — she doesn’t have the height or build. Judy is reminiscent of Maya in the way that her presence commands attention, respect, and awe. Like Maya, she embodies the top star dream simply by existing. This isn’t to say that she doesn’t work hard, both her and Maya are not only prodigious but diligent. Yet, her natural advantages give her an edge over her competitors that Hikari cannot overcome. It’s no coincidence that the top-ranked stars who have been revealed thus far in Revue Starlight are Banana, Maya, and now Judy. Judy’s rise teaches Hikari the lesson that, no matter how hard Hikari works, there will be someone more suited to the top star position than Hikari.

Hikari connects the revue with the loss of her shine as a giraffe skeleton looms above her in the cavernous Natural History Museum in London. The giraffe, arbiter of the revue, is dead, as are any hopes that Hikari had of winning the London duels. This is why she tells Karen that when Karen loses, she will lose something inherent to making her a stage girl: that special shine. The giraffe neither confirms nor denies her suspicions and only says that it takes a lot of brilliance to make a true top star.

This is a direct criticism of not only the strict nature of the Takarazuka Revue, but what happens to top stars themselves once they reach that apex. Banana’s insistence on reliving the same stage over and over again once she reaches the top isn’t a simple plot twist, it’s a reflection of what happens to otokoyaku when they reach position zero: after all of that work, training, and preparation, they often retire shortly afterwards especially if they’ve reached marriageable age. Initially, this fulfilled Kobayashi’s original design for a tourist attraction and training school for young women to become good wives and mothers, but Takarazuka evolved to become much larger than that even if the rigid nature of the school itself hasn’t evolved along with its tremendous influence on young women. Additionally, the creation of an otokoyaku top star requires the participation of everyone in the troupe. They all, especially the otokoyaku’s partner musumeyaku, dedicate their performances to making the top star become that dream for their fans. (As an aside, this is present in Kaoruko Hanayagi and Futaba Isurugi’s relationship, although the roles are reversed with the more boyish Futaba supporting the demure, feminine Kaoruko.) We already know that Hikari’s assumption that the loss to Judy is responsible for the loss of her shine and ambition isn’t wholly true well before she regains it in her duel with Banana. Mahiru Tsuyuzaki’s entire episode uses the visual framing device of confetti sparkles to represent a similar shine that Mahiru had already lost. It’s through defeat that Mahiru regains her radiance because that defeat to Karen reminded Mahiru of why she wanted to stand onstage at all. Like Mahiru, Hikari momentarily loses sight of why she was attending the Royal Academy, to meet Karen onstage. She pushed her away to become better for herself because she was tempted to simply stay by Karen’s side — and the blank pages of unwritten response letters to Karen’s diligent correspondence. Relationships in Takarazuka are forbidden, and Hikari follows this as strictly as she does her coursework.

At Seisho Music Academy, Hikari is reborn. Her promise to and love for Karen overrules her fears and doubts brought on by Judy’s arrival and the stark reality of the system’s unfair nature, allowing her to beat Banana. This too is another point of light — to borrow a turn of phrase from Episode 8’s title — that directly shines on how they’re going to overthrow the system. We learn that Hikari’s love of the stage is born of her love of Karen, and sharing that stage with her. Hikari and Karen’s promise is one that they would stand onstage together. This is why we see a repeat stage of Hikari’s onstage failure with Judy in her fight against Banana. On this same burning landscape, in a similar position, Hikari chooses to reclaim her luster through her promise. 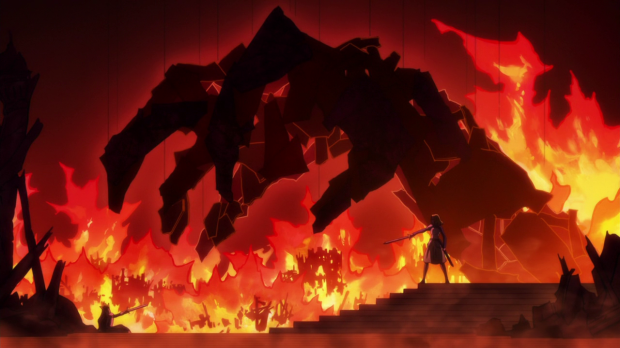 The system as it is now, doesn’t allow for that, just as the Takarazuka system only allows for one top star from one small pool of actresses (all of the otokoyaku in the troupe) from an already small pool of trainees, narrowed down by the initial auditions. Hikari and Karen must find a way to reach for the star together as two, without the seemingly inevitable selection of the star’s light only choosing one of them: the traditional ending of the Starlight play. Perhaps the most important scene of this episode comes in almost a footnote: Karen manages to beat Claudine Saijou. This is something that should never happen if everything is loosely predetermined by the system, and a direct result of Hikari’s arrival along with the renewal of their childhood promise.