A script is a personal item. Even when I wasn’t allowed to scribble in the margins of my Guys and Dolls or Little Shop of Horrors scripts — they were rented, not bought, by my high school — I covered them with a brown paper shopping bag wrapping to match my textbooks and doodled on the cover. Various tabs, bookmarks, and folded pieces of papers with stage directions poked out of the pages, peeking out from beneath the cover while adding a good half inch to the bulk of the script. All of these notations were important, some even added to the entire production by my own suggestion, and included stage directions and music changes among many other things.

And I wasn’t even good. I wasn’t any kind of lead actress, whose scripts often bowed, threatening to break at the binding from all of the extra citations, notes, and paper tabs. My largest high school stage moment came in my freshman year as a flower girl cutting clippings of Audrey II, spreading the man-eating plant around the world. It was a one-off role with no lines, where I led two others onstage to take plant clippings in gardening smocks and cute green gloves.

The first personalized script, or outline of Starlight, shown in Shoujo ☆ Kageki Revue Starlight is Junna Hoshimi’s. Junna’s focus episode, and formidable presence in Episodes 1 and 2, seems like a distant memory at this point — especially with the introduction of Nana “Banana” Daiba’s repeated Starlight stage — but Junna is in many ways the series’ first dueling stage girl.

Junna introduces us to the initial dueling rules, and it’s Junna whose psyche is on display first, with a stage of figurative smoke and mirrors around glasses and mannequin motifs. Junna helps establish a baseline for the duels, reflecting her position as class president both in the series itself and in a more meta way as our personal guide. The note she leaves herself reads, “I will show you that I can seize my own star!” It’s an affirmation and a promise to keep moving forward, even after defeat. That’s the stage girl that Junna is and her personal notations on Starlight reflect this. 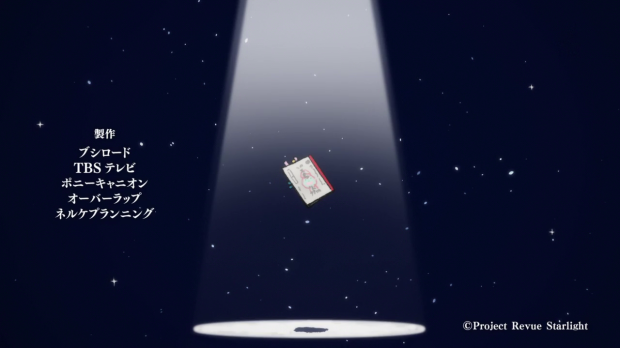 Scripts play a crucial role in the ending sequence, “Fly Me to the Star,” reiterating their importance. Each stage girl is surrounded by personal items that reflect their loves and individual ambitions. They’re like puzzle pieces in a way that form a picture of their unique personalities. Among all of these personal items are their Starlight scripts, showcasing the importance of the show itself — Starlight is the largest framing device that Revue Starlight employs, making it a known play on the level of Takarazuka Revue institutions like Rose of Versailles or Elisabeth — to every stage girl in the 99th troupe. Those scripts have personalized notes, directions, in-jokes, important musical citations, and staging instructions.

As a play comes together, everyone participates, even a lowly ensemble grunt like my high school self. Details often come down to individual interpretations that evolve accidentally. In my senior year production of Joseph and the Amazing Technicolor Dreamcoat, one young woman had a beautiful opera voice (and was taking lessons to become an opera singer) that overpowered others, even as a soloist, and her acting wasn’t strong enough to earn a lead part that year. Yet, her voice was added in a mourning, operatic cry to the song “There’s One More Angel In Heaven” that gave it a distinctly eerie and sinister tone to Joseph’s brothers’ betrayal. As bums of Skid Row, a friend and I decided to pantomime an entire fight over a coin that was hilariously kept in our final production of Little Shop of Horrors. In junior high school, I was cast as a stepsister in Cinderella and clumsiness was added directly to my character because my dancing form was so awful. All of these are minute details, surrounded by myriad changes that transformed the script into my show. My Cinderella. My Little Shop of Horrors. My Guys and Dolls, My Brigadoon. My Joseph and the Amazing Technicolor Dreamcoat.

Even in an environment as strict and tradition-driven as the Takarazuka Revue, every performance, every stage will be slightly different. In Episode 9, we see Kaoruko Hanayagi assisting with costumes, and Futaba Isurugi helping with weapon design. 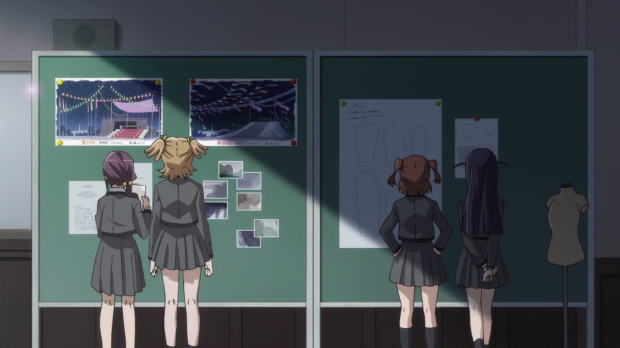 Banana’s first “Fly Me to the Star” version features no words, only music, and her precious script takes position zero in the ending spotlight, indicating that her time as a stage girl has been frozen.

There’s a special type of emptiness that follows the end of a performance’s run. Throughout all four years of musical theatre in high school, nothing ever topped the high of opening night, and nothing reached the emotional low of the Monday after a final performance. So much time, effort, dedication, passion, ambition, and countless other emotions come to a head onstage — for those few months of preparation, set painting, and endless hours of practice you’re surrounded by what becomes a surrogate family, complete with impossibly strong bonds of friendship, infighting, drama, and love. Nothing prepares you for the emotional vacuum that follows and anyone who has ever been in a stage musical can identify with Banana’s actions, even while disagreeing with them, because they’ve felt that same despair.

Yet, one key factor that Banana fails to realize is that not only is that 99th festival stage her Starlight, it’s also Junna’s Starlight. It’s Karen’s Starlight. It’s Maya Tendou’s Starlight. It’s all of their Starlight, and Starlight means something different to each of them, even within the same performance as they share the same stage. They each have a script with unique notations and a certain viewpoint. This is where Karen Aijou comes in. 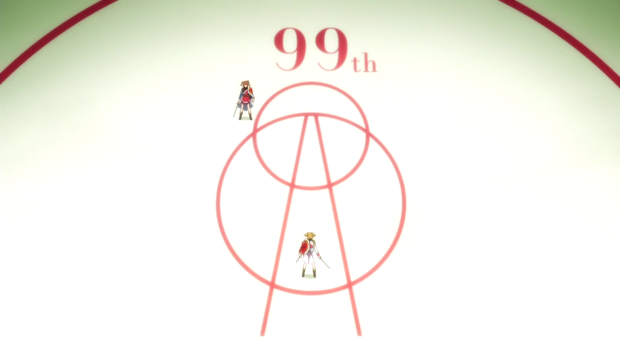 Banana had initially thought that Hikari Kagura, as the new arrival, was the one who stopped her time loop. In Episode 9, Banana realizes that it’s Karen, not Hikari, who changed the revue from eight to nine — Karen, one of the people that Banana says she was trying to “protect” by keeping in stasis. Karen was a known quantity: a background stage girl who made a promise to stand onstage with her childhood friend. Hikari was the catalyst for Karen’s awakening, and it’s Karen who changes the system from within and breaks the rules, simply by entering the duel and taking over for Hikari. Even on that rigid stage, Karen transforms the set performance and makes it her own. This is again reflected in her victory over Banana, where she deliberately walks outside of Banana’s drawn lines that resemble Banana’s Starlight poster and script.

We learn that Banana is a bit scarred from what appears to be a mass exodus from her junior high school theatre group. She was so affected by her first year at Seisho Music Academy and the 99th troupe’s performance of Starlight that she froze everyone in time, before they could leave. Yet Banana herself admits to Junna that she never really grew to know any of them throughout the various time loops like she has more recently in uncharted territory outside of the loop. Banana also admits that she’s added her own notations within the loop, leading to Junna asserting that Banana is a stage girl. Banana finally breaks down and cries, releasing her despair and loss at the 99th performance of Starlight.

In the ending sequence, Banana sings a different version of “Fly Me to the Star” with Junna. In it, her script is joined by other meaningful items: the photographs she constantly takes and her framed picture of her Starlight. By sharing this with Junna, it shows that Banana is ready to move forward and further know her classmates on an ever-evolving stage.