Within my first month of high school, I carried an armful of drop cloths down a narrow flight of stairs, deep into the heart of the old building, a place that few students knew existed. The door opened, pushed with a considerable amount of force by one of the upperclassmen. He loomed over us in the doorway, made slightly menacing by the grey lighting, somehow dull while still making us wince and cover our eyes. Dust rose and fell in small clouds at my feet as I walked, kept low by the autumn humidity. Beside me, the few other freshmen tasked with carting props and supplies back and forth from the auditorium shivered from a chill in the air.

The old building was connected to two newer buildings by narrow hallways that never seemed to quite fit in with the existing decor. My history class in that same building had Cold War blackout curtains. As we shuffled forward, stepping around a variety of odd furniture, textile piles, a candelabra, and a painted carriage, two of my classmates began to snicker, pointing at a hole in the insulation next to a sign that read, “Danger! Asbestos.”

This was a Cold War bomb shelter. It also was the drama club prop and set storage room. 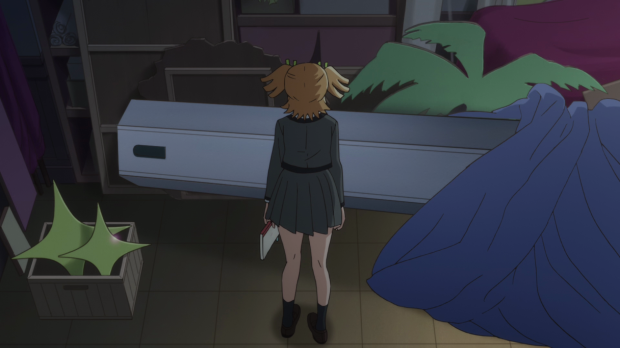 Remembering her junior high school days, Nana “Banana” Daiba lifts a blue curtain up from the all-important tower in the play Starlight. To her left, peering up from a box, are the two stars that leads Claire and Flora seek. A nearby palm tree lays flat next to the tower on the ground. The room is filled with props for the 99th performance of Starlight, a play that will never happen again in the exact same way. Now, it’s time for Banana to take part in the 100th performance. 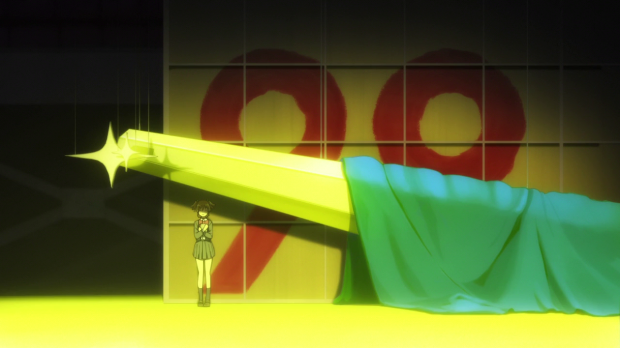 It’s the natural conclusion of her time loop, which places the entirety of the 99th troupe in stasis until Karen Aijou (by way of Hikari Kagura) breaks the cycle. Trapping her peers through her ascendency to top stardom, Banana stood in the shadow of the tower as it appeared to be falling, along with the two stars. Bathed in a sickly yellow light, a shadow fell over her face as she clasped her dog-eared, bookmarked script.

Banana’s scene in the prop room is a natural reprise of this scene during the full reveal of her top star success, powers, and overwhelming desire to return to the familiar, always. Then, the tower was already falling. In the prop room, the tower has fell, grounded among boxes of props from the old performance, half-assembled set pieces, and a box with a similar, red paint that reads “99.” It’s time for the 100th showing to truly begin, but Banana hasn’t accepted it yet. Instead she stands, nearly catatonic, as she describes what happened to Junna Hoshimi. Why the time seems so much longer than it actually has been. Why she has to return to the 99th performance while surrounded by the 99th’s props packed away in boxes, disassembled, and laid on the floor.

A high school theatre prop room is a particularly weird place. With each performance, everything is reused. A fresh coat of paint turns a carriage into a farm cart. What was once a sandy beach set is cut up and pieced together as a Havana nightclub where Sergeant Sarah Brown and Sky Masterson fall in love. A palm tree is cut down to a warped, gnarled stump that sits in a dense, fog-machine-created background while Tommy Albright sings to Fiona MacLaren. “They next attacked a passing GOAT!” was shouted by the sons of Jacob in my senior year, but the wooden goat they comically attacked had been some other animal in another theatre lifetime. Everything in that bomb-shelter-turned-storage-room became something else throughout my four years in my high school’s drama club. The next year, they became another thing entirely. Props never stay in one show, for one purpose, for long.

Banana’s breakdown and confession to Junna is framed in a set and prop storage room. For Banana, it’s a room where the props from her show, her Starlight, have gone to die. Banana’s despondency at the loss of her 99th performance — she feels it slipping away, well out of reach, even while verbally doubling-down — is palpable and understandable. To Junna, it’s a waypoint before these props and sets become something new. A new star-gathering tower, new stars to finally be grasped, without separating the leads this time. For both, it’s a small first step towards Banana’s recovery.