Sometimes, you learn about things in the wrong (non-chronological) order. Something that came first naturally comes last to someone consuming a newer piece of media inspired by that very thing. Emotional resonance with the media that came later inspires research, a tracing of influences.

Due to gaps in my own anime-watching habits, I don’t have an emotional attachment to Takashi Watanabe’s 2000 anime adaptation Boogiepop Phantom, like many anime fans around my age. However, when I began to watch anime as it aired, one of the first series that resonated with me was Bakemonogatari in 2009. The Monogatari series light novels were penned by Nisio Isin, whose writing was inspired by Kouhei Kadono’s Boogiepop novel series.

All of this is a preface to my immediate reaction after watching the first two episodes of Boogiepop and Others.

It reminded me of Nadeko’s narrative in the Monogatari series. 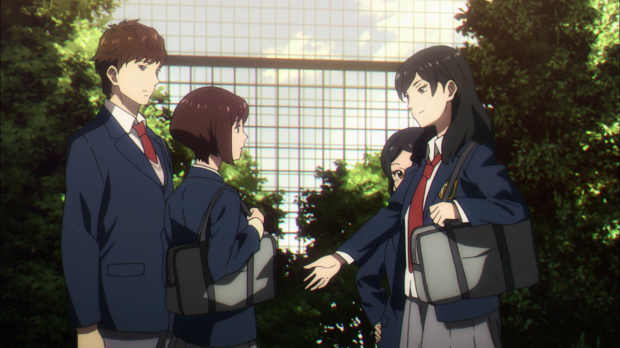 Boogiepop wa Warawanai (Boogiepop and Others) the anime adaptation starts slow. The first episode is made better by the second episode — it was good foresight on the parts of everyone involved to release the two together — which recontextualizes events in the first, particularly the introduction of Nagi Kirima to Touka Miyashita (Boogiepop) at the end of Episode 1, presumably after much of the action has happened offscreen. Episode 2 makes it clear that said action, and Nagi’s involvement as well as the roles of others like Kazuko Suema and Naoko Kamikishiro, are to be introduced and explained in subsequent episodes.

Despite not having read Kadono’s original novels, I could easily see how the way he plays with chronology and reveals smaller pieces of a larger puzzle with each story could have inspired writers like Monogatari‘s Isin or Ryohgo Narita (Baccano!, Durarara!!), both of whom play with chronology and a variety of viewpoints in their stories. Yet, what reminded me of Nadeko’s arc specifically, was the tale of a friend group splitting apart due to drugs as told by Kyouko Kinoshita.

Nadeko’s story begins as one of the least interesting Bakemonogatari arcs without the greater context of Monogatari Second Season. Cursed by a classmate over a romantic dispute, Nadeko inadvertently makes the curse significantly worse through her efforts to cure herself. As a standalone story, the most interesting parts are the banter between Koyomi Araragi and Suruga Kanbaru, whose friendship develops after the events of Suruga’s own first arc. Nadeko is a bit of a throwaway character in her first appearances: a cute junior high school student in love with her friend’s (Tsukihi Araragi) brother in Koyomi.

This all changes in the second season, where Nadeko becomes a vengeful snake goddess who nearly takes over the entire town.

Revisiting Nadeko’s dialogue, framing, and appearances in Bakemonogatari, Nisemonogatari, and Koyomimonogatari after watching Second Season reveal much more about Nadeko’s character, and the type of person she presents herself as in relief to her genuine self. As it is with all Monogatari series stories, the real monsters always come from the humans themselves and their desires. The oddities or supernatural beings they encounter only aid or amplify existing human emotions.

Nadeko’s entire emotional narrative is driven, and continuously returns to, this idea of junior high school students dabbling in the occult coupled with resentment among Nadeko’s classmates. Her first snake curse in Bakemonogatari is due to a romantic squabble. She gives insight to Koyomi about occult charms circulating through her school in Nisemonogatari. And the fallout continues to affect her — ultimately driving her to reveal her true personality — in Second Season‘s Otorimonogatari.

Kyouko’s story about Akiko Kusatsu offering drugs to her friend circle and the subsequent disappearance of these girls along with Akiko herself is presented to Kazuko at the beginning of Boogiepop and Others‘ second episode. Like Nadeko’s initial curse, it’s comparatively innocuous — as innocuous as teenagers taking drugs can be — to the web of alien possession, murder, and supernatural elements that follow.

Although there are alien and supernatural presences here, it seems that the actions of humanity will still be at the forefront of the story.

Thanks to Kyouko’s story and schoolyard rumors, Nagi is initially introduced as a delinquent who was suspended and her classmates, including Kyouko, spread further rumors that she’s somehow responsible for recent disappearances and murders as the fictional “Boogiepop” (who is not responsible for the murders at all and is actually an alter-ego of Touka). The second episode of Boogiepop and Others then skips around chronologically, reframing what little we’ve seen of Nagi’s actions up until that point. Bubbling beneath the surface is not only some sort of supernatural conflict, but natural tendencies of humans from compassion, to confusion, to resentment, to malice. Boogiepop’s initial Episode 1 speech to passersby scolds them for their callousness, while Naoko Kamikishiro’s rescue of the alien Echoes shows caring and consideration for others. Boogiepop and Others seems like it will delve into similar themes as Monogatari. Isin didn’t just take non-chronological schematics from Kadono, he took musings on humanity and the monstrous as well.

This is a lot of rambling to say this: I’m looking forward to how Boogiepop and Others further fills in the gaps even though I’m learning about Boogiepop‘s influence in a non-chronological way.