It should come as no surprise to anyone familiar with the work of Naoko Yamada that flowers and flower language have their place in her latest film: Liz and the Blue Bird. For Yamada, flowers take the place of things left unsaid when people are unable to express their feelings for each other due to a physical disability (A Silent Voice), mental illnesses or internal fear (also A Silent Voice), societal expectations (her episode of Violet Evergarden), or myriad other reasons. When important context goes unsaid, Yamada frequently turns to flower language to do the emotional heavy lifting.

Her usage of flowers in Liz and the Blue Bird has a defter touch than A Silent Voice and Violet Evergarden‘s camellia princess. Many things go unsaid or unspoken between leads Mizore Yoroizuka and Nozomi Kasaki and Yamada wisely uses what unites them — music — to express most of them. Flowers create a secondary, background context, featured more prominently in the Liz and the Blue Bird storybook — used as another framing device for Mizore and Nozomi’s relationship — with a few flashes to real-life flowers at key moments between the two. 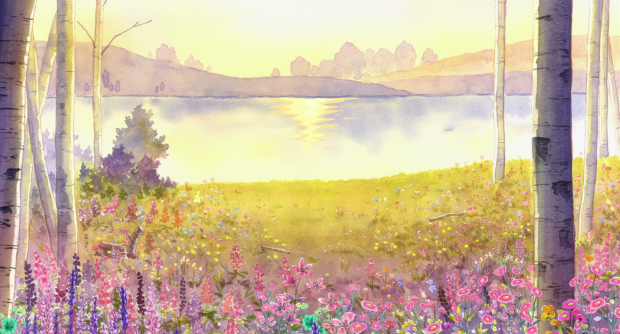 The movie opens with a page from the storybook that frames the rising sun over a lake with birch trees and flowers. The most prominent flowers are lupin or lupine on the left side and round pink flowers with yellow centers on the right. Lupine flowers are said to represent happiness and imagination. The round flowers could be a variety of flowers, but they most resemble pink cosmos which mean a deep lasting love, cleanliness, or in Japanese hanakotoba, a maiden’s heart.

Our first shot of Liz is framed by more lupines, holly, and a lily of the valley flower. While lily of the valley is perhaps most known for being poisonous, it carries similar meanings of a white lily like purity, chastity, and sweetness. There’s a story that one is incomplete without the person to whom they give a lily of the valley flower. Holly berries have a slightly more humorous meaning, signaling that they’re single and looking. At this point, Liz is alone outside of her animal friends, but the flowers showcase the depth that her feelings could have if given a chance.

Liz sees the blue bird and after it flies away, the movie pans down to a flowerscape that prominently features blue flowers with yellow centers. The most obvious flower that would tie in here would be a forget-me-not, but these flowers aren’t as small or clustered. They more resemble nemophila (although the centers don’t match) or a blue anemone (despite the centers not being a darker color. Forget-me-nots carry a message of true love but also remembrance, nemophila forgiveness, and blue anemones remembrance and well-wishes for the future or protection. All of these flowers coincide with the blue bird’s first appearance, signifying its importance.

The plot twist of Liz and the Blue Bird, if you can call it that, is that childhood friends Mizore Yoroizuka and Nozomi Kasaki assume that their storybook counterparts to their relationship are Liz and the blue bird respectively when the reverse is true. This is showcased through the music of the movie — which is a series of posts in and of itself — and also the usage of flower language among other symbols like the blue bird’s feather.

Buttercups appear briefly as a standalone shot when Nozomi crosses the school gate as Mizore waits for her on the steps. Buttercups can mean a cheery happiness or childlike charm, but can also represent childishness and ingratitude. Much goes unsaid between Nozomi and Mizore throughout the film and this meaning could apply to both of them. Initially, the buttercups only seem to apply to Nozomi, who is more outwardly capricious, and the framing sets us up to think this is the case. Similarly, the feather of the blue bird appears to be bestowed upon Mizore by Nozomi, but once all is revealed, this entire scene can be viewed as Nozomi returning the feather to its rightful owner, Mizore. 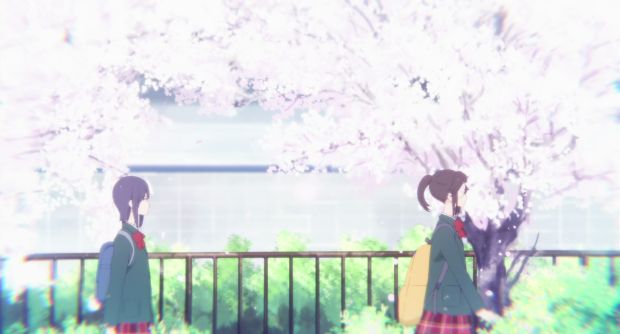 As Mizore follows the energetic Nozomi up the stairs, she recalls following Nozomi as an elementary school student walking under falling cherry blossoms. Liz and the Blue Bird is the story that reflects, like many of Yamada’s projects, on the transient nature of relationships. Much of the miscommunication comes from the fact that Mizore doesn’t understand why Liz would have to let the blue bird go.

Cherry blossoms are a repeating motif in Japanese media as a whole, representing impermanence. Mizore and Nozomi’s relationship is a deep emotional connection, but it’s also fleeting. The positioning of this flashback reiterates Mizore and Nozomi’s existing dynamic while also telling us that the nature of their relationship is about to change because it too is transient.

Most of the flowers in Liz and the Blue Bird appear in the titular storybook. These illustrations frequently return to the same flowers at Liz’s home, but recontextualize them through her relationship with the blue bird. Here we see what appear to be buttercups (which were also shown in Mizore and Nozomi’s opening scene) as well as what appear to be pink anemones. Pink anemones carry a different meaning than their blue counterparts and can have the negative connotation of a forsaken or dying love.

These also appear at the blue bird’s feet alongside blue flowers with pointed petals that most resemble a blue star flower although could be something else. Blue star flowers are said to show faithfulness and affection. Despite the fact that pink anemones may have a gloomier meaning, a possible indication of how Liz eventually shows her love by telling the blue bird to return to the skies, the blue stars are a reminder that there is genuine affection and a steadfast nature to their relationship. Even if it ends, their feelings are valid.

There’s also a cute scene where Liz pins what look like holly berries in the blue bird’s hair. As previously mentioned, they can carry the meaning of single and looking, so this is a bit of a cute flower language joke. “She accepts it because Liz said so. The blue bird can’t reject the choice Liz made. Because the blue bird loves Liz very much. She has to fly away, even if it breaks her heart.”

-Mizore Yoroizuka to her teacher, Satomi Niiyama, Liz and the Blue Bird

A lingering shot at a small branch of berries accompanies this conversation that Mizore has with her teacher. It marks the moment that Mizore realizes that she’s not Liz, but the blue bird — her immense musical talent makes this the case and is the equivalent of the blue bird’s wings. The reason why Mizore didn’t understand why Liz gave up the blue bird was because she was thinking of her as Liz who didn’t want to give up Nozomi, the blue bird. The holly branch visually ties Mizore to the blue bird making the connection as Mizore and Nozomi think things through separately. 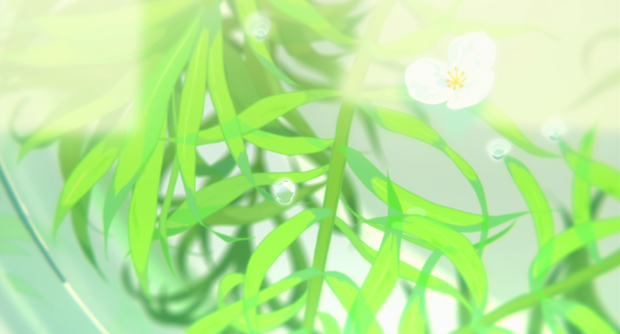 As they both come to the realization that Mizore is the blue bird and Nozomi is Liz, a small, white, three-petaled flower appears. There are few flowers with three petals and this most resembles a spiderwort. Spiderworts are said to mean that you hold someone in high regard and admire them. This is particularly important for Mizore and Nozomi, especially Nozomi, who just realized that she has unwittingly held Mizore back.

Naoko Yamada doesn’t use flowers in the same way that she uses them to express almost all of the unspoken emotion in A Silent Voice. Instead, she lets the music do the talking and uses flowers as a visual through line that accompanies the emotional narrative much like the storybook itself or the image of the blue bird. It’s fitting that Mizore’s goodbye to Nozomi and “flight” is told through the musical piece and not any other way. Here, it’s Nozomi who follows Mizore, unable to reach the same heights. This isn’t a happy ending, nor is it a sad one. Instead, it’s a bittersweet turning point in a relationship that both of them have outgrown in some way. Still, the admiration and affection remains.