One of the most striking images from the main Sarazanmai preview trailer is of a red stain expanding outwards from an icon of an otter in a heart. The stain looks like a blood droplet spreading across Asakusa just above (or below in relation to this map, which is rotated) the Sumida River. Sarazanmai‘s Asakusa policeman duo of Reo Niiboshi and Mabu Akutsu appear to set this reaction in motion by throwing their hats in the air and yelling about extracting desire — complete with a transformation sequence that includes a lot of rising otter icons and the character “吸” for sucking or extracting. Given that the basic outline of the story involves three junior high school students transformed into kappa in search of tiny balls (shirikodama) inside the anuses of kappa zombies, Reo and Mabu’s presumed transformation where they “milk desire” is already an interesting addition.

The relationship between kappa and otters (kawauso) goes back to Japanese folklore, much like the existence of the shirikodama itself. Sarazanmai director Kunihiko Ikuhara used a kappa and otter motif around the parents of Mawaru Penguindrum‘s Ringo Oginome in a rather insidious way that could tell us a lot about his plans for a similar motif in Sarazanmai.

Among many other things, Mawaru Penguindrum grapples with questions of parental guidance, or lack thereof. Specifically, Penguindrum wrestles with the idea of allowing or forcing children carry the burden of their parents’ sins while also showcasing a variety of toxicity born of societal factors passed down from generation to generation, landing finally on the childhood experiences of Kanba, Shouma, and Himari Takakura as well as Ringo Oginome, Keiju Tabuki and Masako Natsume.

As members of the in-universe equivalent of the Aum Shinrikyo cult, responsible for the deadly 1995 terrorist attacks on the Tokyo subway, Chiemi and Kenzan Takakura are shown as loving parents to a point. Yet the story of their relationship with their children is ultimately told in a warped version of “Mary had a little lamb” where their fear of a looming crisis and disgust with the world drove them to the cult, away from their children whom they had said they were trying to protect through their cult activities, and eventually terrorism. Chiemi and Kenzan were active perpetrators towards the top, not low-level fodder and their actions affected their children directly through active neglect on their part, shame and active disgust or violence from outsiders towards their progeny later in life (Himari’s expulsion from school), and anger from other affected parties, like Tabuki or Yuri Tokikago.

Their actions also play a large part in destroying the relationship between Ringo’s parents, Satoshi and Eriko Oginome, after the terrorist attack kills their daughter, and Ringo’s sister, Momoka Oginome.

In Episode 6 of Penguindrum, “You and I Are Connected by M,” a feverish Ringo remembers a fight between her parents that she overheard as a child. So begins, in true Ikuhara fashion, the transformation of Ringo’s parents into an otter (Satoshi) and a kappa (Eriko) for the duration of the fight. Clutching her stuffed toy kappa and otter, Ringo peers in on her parents from her bedroom. They never notice her.

Still grieving from Momoka’s death years later, Satoshi and Eriko are presumably rehashing an argument that they’ve had several times. Ringo has the (mis)fortune of sharing a birthday with Momoka’s death day, tying her very existence to her sister’s death. Naturally, both Satoshi and Eriko are reminded of this whenever they see Ringo, or celebrate her birthday in tandem with a day of remembrance for Momoka.

Eriko, the kappa, says that she cannot get over Momoka’s death. Satoshi, the otter, says that they should pour all of their love into Ringo instead. Eriko takes this as a demand to forget Momoka, while Satoshi sees Eriko’s reluctance to move on as harmful to Ringo. He throws his rock on the ground. She, in turn, smashes the dish from her head on the floor. These are both meant to show just how serious they each are about their respective positions and how violent or hurtful the argument actually was — certainly not something that five year-old Ringo was ever supposed to witness. In folklore if a kappa’s dish is emptied or broken, the kappa is seriously weakened or dies immediately. 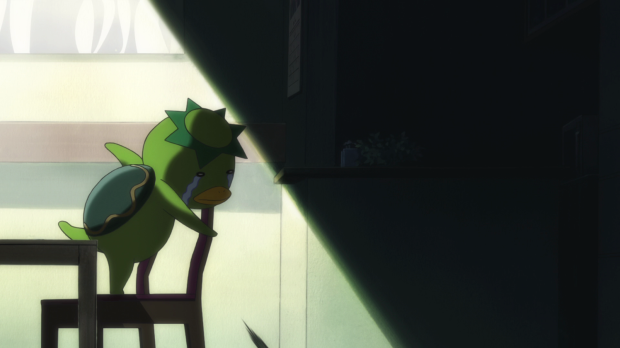 With Momoka’s death (on the same day that Ringo was born) tearing her parents apart, the lesson Ringo takes from this is that she was born to replace Momoka and live on in her sister’s stead. Ringo tells herself that if she does this, then her family will be reunited. She fervently holds onto this as she grows up, and this belief informs all of her often drastic actions throughout the first half of the show. Ringo’s parents are seemingly long-divorced once we as an audience meet them in Penguindrum‘s present, and show no signs of getting back together, but this only drives Ringo to further desperation, especially when she sees her father with another woman with a daughter. While Ringo experiences life as a proxy for her sister, especially while pursing a romantic relationship with Tabuki, the stuffed kappa and otter that she carried during that fight as a child occasionally reappear. In “You and I Are Connected by M” they show up during her false wedding night, a stark reminder of just how warped her worldview has become with that fight as a catalyst.

In Japanese folklore, otters and kappas aren’t particularly admirable creatures — tricksters at best, murderers at worst — and standing in for Satoshi and Eriko doesn’t cast a complimentary light on either of Ringo’s parents. Their opposing viewpoints on how to deal with their grief tears their family apart and affects Ringo’s mental well-being long after that defining conversation, making her believe that she needs to become her sister in order to be loved. It’s not Satoshi and Eriko’s fault that Momoka died — this is another instance of Chiemi and Kenzan’s actions tainting the entire world around them — but they still pass this on to Ringo, making her feel unloved and unwanted from a young age.

Across a variety of prefectures, otters were seen as murderous shapeshifters who would appear as beautiful women before killing men. They were also said to possess humans, and were sometimes described as a type of kappa or said to turn into kappa upon growing older. Kappa have long been blamed for drownings of both humans and animals. In pursuit of the elusive shirikodama, kappa would drown their prey and then extract the ball from the anus by force, either through pulling or sucking.

The otter is more deceitful than the kappa and could say a lot about what Penguindrum thinks of Ringo’s father. In Episode 5, Ringo meets up with the distracted Satoshi, who interrupts their visit, revealing a moray eel cell phone strap that replaced the penguin one all three of them bought together. The moray eel returns in Ringo’s flashback, destroying the dinner table and knocking out both the kappa and otter in Ringo’s dream. Despite the fact that it seems like Satoshi is the one who cares for Ringo more in the argument, he’s completely distracted during their dinner and seems to have moved on not only from Momoka’s death, but from his old family entirely.

Ringo also ends up with her mother, the kappa, and presumably only sees her father on visitation day. By contrast, present-day Eriko is shown to be a loving, caring mother with a small devious streak.

“Even in this rotten world, I’m not letting go of desire.”

The previews of Sarazanmai unite otter imagery with the policeman duo of Reo and Mabu and the ideas of mining desire from the masses. We already know that our main kappa trio is going to be composed of Kazuki Yasaka, Toi Kuji, and Enta Jinai, and employed by Keppi, the so-called crown prince of the Kappa Kingdom. They appear to be pitted against each other, but could be after similar goals with different means or execution. The kappa trio is focused on connection, while the policeman duo seems more honed in on this idea of desire, notably separate from love, and all-encompassing. Following the path of other Ikuhara “villains,” Reo and Mabu likely have good reasons for why they’re doing whatever they’re doing, influenced by societal mores or existing social structures.

Reo and Mabu have also been behind the bulk of pre-series promotion. Until March 31, they had their own Twitter account where the two posted daily. They were in the first character art released for the series, and also have their own manga: Reo and Mabu ~Together We Are Sarazanmai~. As “otters,” they may turn out to be deceitful, manipulative, and also playful.

It’s important to see that Satoshi and Eriko in Penguindrum were similar to each other as well — an otter is said to be a type of kappa — even when they found themselves on opposite sides of the parenting argument. They also were people affected by a great tragedy. This affected how Ringo grew up, and they are both accountable for that, but neither of them could be considered evil people. Reo and Mabu, even if they are antagonists at the beginning, will likely follow a similarly nuanced path.