I want to be connected, but I don’t want to tell the truth.

I want to connect, but I don’t want to give.

The translated title of the series’ third episode “I want to connect, but it’s not meant to be” includes the negative directly.

These statements all guide us to one of Sarazanmai‘s key thematic elements, the dichotomy of what the series sets up as “love” versus “desire,” wanting something but not wanting a key part of what that something entails.

For someone who claims to be going to great lengths for his brother Haruka, Kazuki Yasaka barely acknowledges him when directly interacting with Haruka. While directly talking to Haruka, Kazuki feigns disinterest and boredom. He tries to appear like he’s uninterested in what Haruka has to say, and the only emotional reaction from Kazuki during one of their conversations is his small cheer to himself at Haruka’s happiness to be chatting with Sara Azuma.

Behind this disinterest is an entire double life of him crossdressing, supposedly for Haruka’s sake, to make him happy.

Enta Jinai shows more brotherly affection for Haruka in a few Episode 3 scenes than Kazuki has within the scope of the series. It’s also revealed that Haruka is disabled, and needs to use a wheelchair to get around. This adds fuel to the theory that something serious happened with both Haruka and Kazuki — most likely depicted in the opening sequence of the series premiere — and Kazuki is trying to make up for it by assuming the image of Sara and texting Haruka as Sara daily. Here, Kazuki gets the “desire” part of the equation, but he doesn’t understand that he truly needs to open up to receive the “love” part. His instant gratification from Haruka’s responses hints at how toxic this relationship could (or already has) become. He gives up everything to capture these lucky selfies as Sara, so he isn’t the one spending time with Haruka in the park. There’s an underlying sense of guilt in Kazuki’s actions, as if he feels responsible for whatever happened to Haruka and therefore is keeping himself at a large distance while indulging himself in a concurrent obsession in the name of making Haruka happy.

In a conversation with Enta, Haruka talks about Kazuki and how he’s worried about his older brother. We see that Kazuki threw out his blue miçanga anklet when he suddenly quit soccer. They both agree that they liked Kazuki better when he played soccer, but Enta’s affirmation has a more selfish tinge to it. 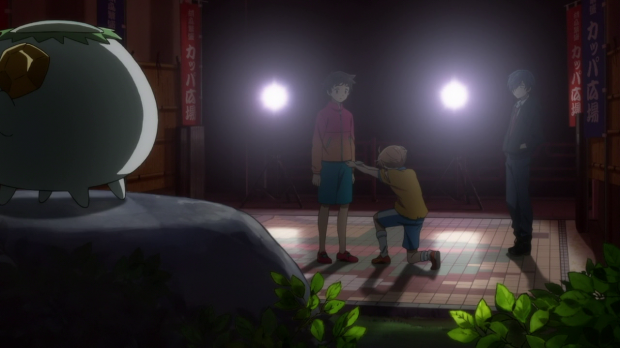 Enta takes the lead for most of this episode, which ends with a heartfelt confession. Of the main trio, Enta certainly seems the most in tune with his own emotions, which makes his confession to Kazuki genuinely heartbreaking, especially when the scene begins to follow the similar comedic trajectory of Enta’s Kazuki daydreams and you know that he’s going to be ignored in some way.

The episode title, “I want to connect, but it’s not meant to be” is slightly different than its predecessors, not only because the negative is included, but because it directly passes off responsibility to another party — in Enta’s case, Kazuki. It implies that part of Enta’s inability to connect is due to someone else and not Enta. This is partially true because Enta’s feelings won’t be returned if Kazuki doesn’t feel romantically towards him in the same way, and he won’t reach his desired connection. It’s also partially true because of societal pressures that try to negate queer romantic feelings, or tell the owner of said feelings that their emotions aren’t genuine.

Enta’s feelings are genuine, but he also shows a desire not only for Kazuki, but for things to be as they were. He puts his time with Kazuki in the soccer club up on a pedestal and in a way, is not getting to know Kazuki as himself. Even in his imagined confession, he asks Kazuki to be the golden duo for life. This isn’t to say that Enta isn’t trying — he’s more open and honest about his emotions than Kazuki is regarding Kazuki’s relationship with Haruka, but there’s many facets to his crush on Kazuki, and one of them is a desire to return to what for him was the status quo.