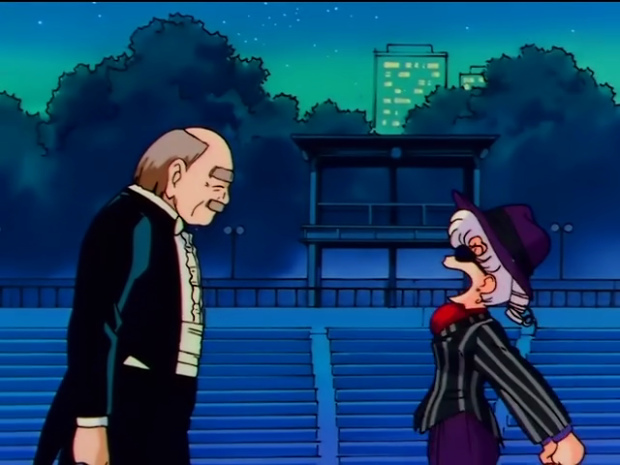 When you’re a hot-shot television producer but you forget your business cards so you just end up yelling.

I’ve made no secret of how much I love Sailor Moon Sailor Stars, and how important it was to me at a formative age. This year, I finished a full rewatch of it. Unbeknownst to high school me, Sailor Stars also introduced me to two influential and creative anime directors who came from what people now call the Kunihiko Ikuhara tree or school: Junichi Sato and Takuya Igarashi. 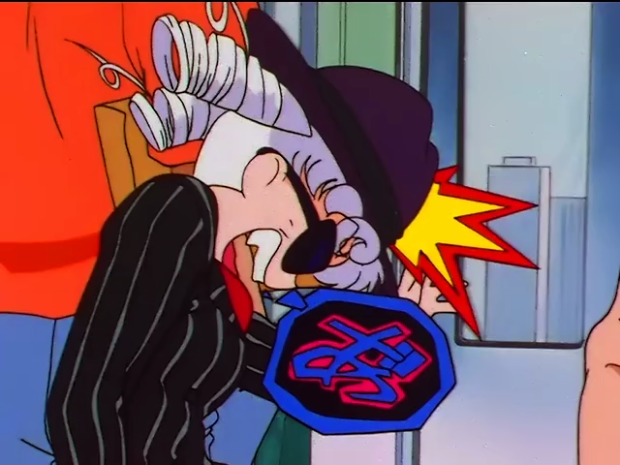 This is, first and foremost, a Sailor Iron Mouse appreciation post.

Many have tried to follow in the footsteps of Sailor Iron Mouse — Igarashi’s Star Driver had Midori Okamoto/Professor Green, who preyed on her students, and other Sailor Moon villains have acted very similarly — but few have been as successful or hilarious. There’s something about a tiny woman in a mafia pinstripe suit picking out people that she thinks are hot and then taking their star seeds. She doesn’t have it all together, and her clumsiness makes her existence rife for the type of visual gags that Igarashi loves to throw into his series.

Sailor Iron Mouse is not only great, but she brings out the best in Igarashi (Ojamajo Doremi, Star Driver, Ouran High School Host Club, Bungou Stray Dogs) and Sato (Ojamajo Doremi, Kaleido Star, Aria, Princess Tutu), allowing them to showcase visual quirks that end up in their works for years to come. Takuya Igarashi is one of my favorite anime directors. He hasn’t always been successful (Captain Earth, arguably Sailor Stars itself) but is capable of stunning visuals and effective visual gags. Junichi Sato is most well-known for the Aria series, but has also had great success with slower-paced, contemplative slice-of-life series like Amanchu! (another anime adaptation of Aria mangaka Kozue Amano), and Tamayura. The two helmed the wonderful Ojamajo Doremi together.

Igarashi has two Sailor Iron Mouse episodes: one responsible for her initial introduction, and the other her final “standard” episode (although he was also series director, so likely had some hand in most of the episodes). Sato receives the episode that follows, our final, and hilarious, farewell to Sailor Iron Mouse before her boss, Galaxia, kills her.

In this rewatch, I was struck that it was Sato who used more obvious visual gags, playing up how rotary phones (Sailor Iron Mouse’s method of contacting her boss) were stalking her as her time was running out. While on the train she sees a poster for the Three Lights and remarks that of course it would be them, underlining how obvious her targets were this entire time (effectively breaking the fourth wall and talking directly to the audience). He puts Haruka and Michiru in corny matching couple outfits, and also gives Seiya Kou an “SOS” shirt when they talk to an injured Usagi Tsukino. 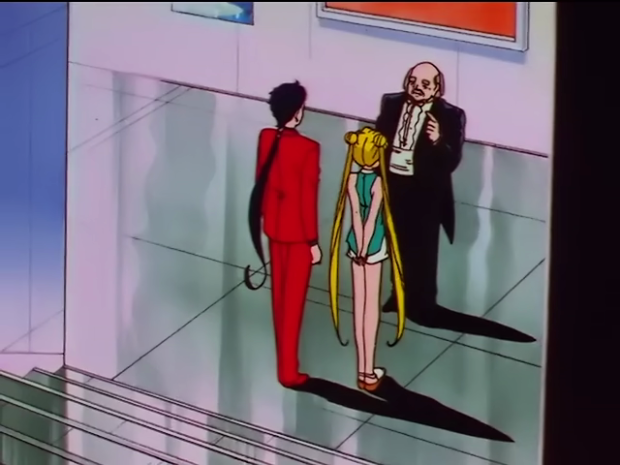 Meanwhile, Igarashi uses fewer gags but focuses on the distance, and growing closeness, between Usagi and Seiya by isolating them from each other or placing them side-by-side. 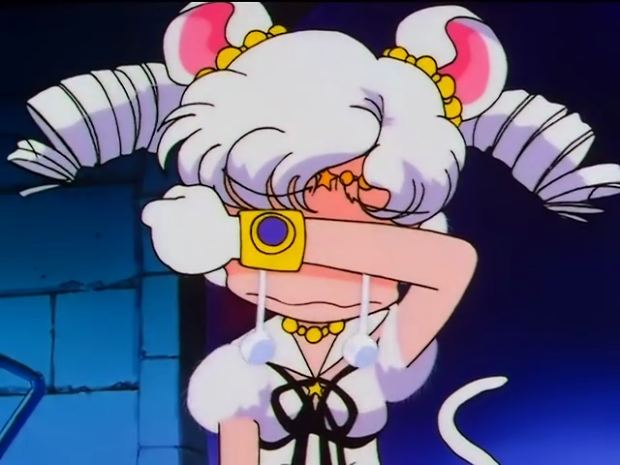 The two episodes work perfectly in tandem together, including visual through lines that highlight the aforementioned distance and genuine romantic tension between Usagi and Seiya, gags with Usagi’s leg being injured twice (once in Igarashi’s episode and then again in Sato’s episode) due to her general clumsiness, and a lot of Sailor Iron Mouse facial reactions that are very similar to what the two would go on to do with Ojamajo Doremi.