There is likely to be a lot of Masaaki Yuasa’s work in decade top tens, especially if they include films (which mine does not). Beginning with The Tatami Galaxy in 2010, Yuasa had a remarkable decade that included Kick Heart (2013), The Night Is Short, Walk On Girl (2017), and Devilman Crybaby (2019) along with other successful projects and animation guest spots in Space Dandy and Adventure Time.

Ping Pong the Animation surpasses any other Yuasa work for me personally.

The opening lyrics of “Tada Hitori” by Bakudan Johnny (used as Ping Pong the Animation‘s opening theme) sum up the series’ overarching theme better than I ever could.

Ping Pong the Animation is first and foremost a story about talent and ambition. Not everyone has it in equal measures and sometimes we all need a kick in the ass. The friendship between Makoto “Smile” Tsukimoto and Yutaka “Peco” Hoshino is painfully relatable and messy. Neither of them can move forward while trapped in this toxic, fairly codependent stasis that the series slowly unravels. When they both come out the other side as more whole and stable humans, it’s an emotional triumph that few other series have been able to top. Their journey is framed by phenomenal characters at every turn (Kong Wenge is my personal favorite) whose own individual narratives are equally compelling and emotionally-affecting. 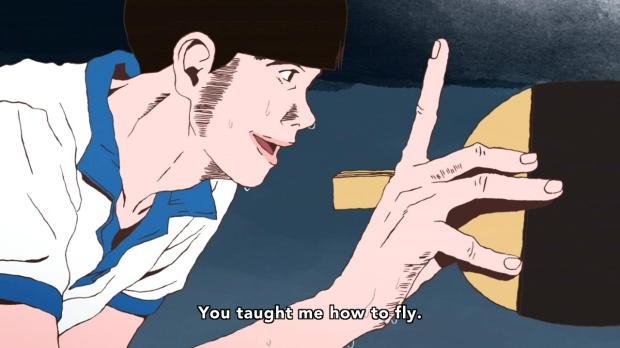 Many sports series deal with these themes — they’re the easiest to develop in any sort of competition show — but none treat them with the nuance of Ping Pong the Animation. At every turn, Yuasa’s visual flair punctuates these narratives, delivering them with precision. The sound direction in this series is also fantastic, infusing joy and despair into every match.

Not everyone has the talent to go pro. Not everyone has the wherewithal or ambition to make the most of their talent. Sometimes hard work can propel someone who is naturally less gifted to the top and sometimes it just can’t. Sometimes having talent — or being told you have talent — is terrifying. Ping Pong the Animation knows all of this and presents it better than any other series I’ve seen.

The Stop After the Next

Smile and the Butterfly Effect: Converging Narratives in Ping Pong

Peco, Kong, and Presence on the Court