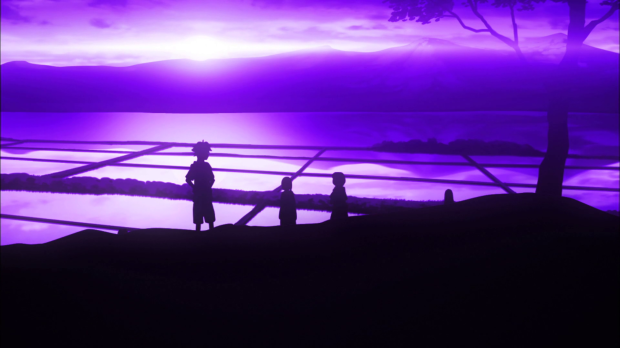 I hadn’t rewatched From the New World until I reviewed it specifically for this list. Because it has been seven years, I had forgotten the actual opening of the series — instead, the ubiquitous image of this show, the children standing on a hill at sunset, is what had stuck in my mind.

From the New World begins with a flickering camera, tension that the viewer can instantly feel, before it’s released in a series of human explosions to Antonín Dvořák’s Symphony No. 9 (From the New World). More specifically, “Largo” or “Going Home” as it’s more commonly known in the United States. It then transitions, still playing this song, to the image I remembered. As if they’re talking to the viewer directly, one of the children says, “When they play ‘The Way Home’ plays on the speakers you have to head back.” It’s equal parts haunting, stunning, and (upon rewatching) emotionally-affecting despite the fact that a fresh viewer knows nothing about the violence shown in brief bursts or these children arguing at sunset.

It’s only a taste of what’s to come.

When I first watched From the New World, I was at an odd point in my life where I felt like everything I wrote was awful, so I just didn’t write — as opposed to now where I still think everything I write is awful but the exact purpose of this blog is to simply keep writing about shows that I love or am fascinated by regardless of quality. I didn’t write much about it, but it made me think in a very specific way that was much different and broader than more typical mystery or puzzle-box storytelling.

Parts of From the New World are deeply cynical about human nature and no character escapes wholly unscathed. With each reveal about the world that Saki Watanabe and her classmates live in comes a pointed jab at humanity. This series begins at a slow and relaxed pace, but conveys a building tension, especially with cuts from Saki’s every day life, back to the initial boom of humans developing psychokinetic powers and destroying each other. Even with a fairly egregious infodump a few episodes in, From the New World is so smart and visually-arresting that I hardly cared, especially when the series picked up its pace with horror after horror after horror. It’s one thing to make an anime (or novel, From the New World is based on the Yusuke Kishi novel of the same name) about a far-off dystopian future, it’s another thing to succinctly underline so many flaws of human societies with the confidence and visual panache of From the New World.