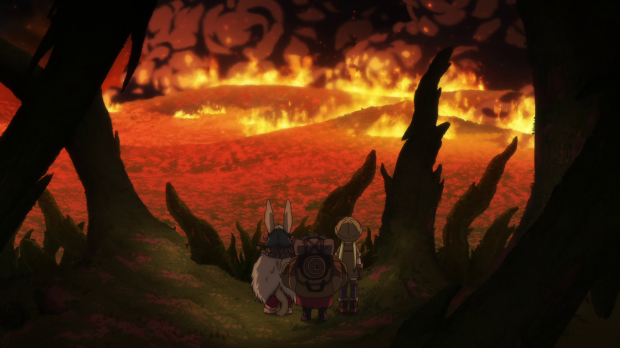 The final episode of Made in Abyss ends with an anime-only, remarkably-fitting ending where Riko sends a message up to her home city of Orth from the abyss. It effectively acts as her ascent. She cannot return to the surface due to the curse of the Abyss and has decided to continue journeying towards the bottom with no definitive end outside of her own curiosity and potentially meeting her mother. With the fifth layer of the Abyss well within her sights as she descends through the fourth with Nanachi as her guide and the ever-loyal Reg as her protection, Riko knows that she’s physically closer to her own “last dive” than she is to the surface and Orth.

Riko had already accepted the fact that she is unlikely to ever leave the Abyss, but her message confirms this in a visual way while giving Riko her own return.

It’s no coincidence that Riko’s Episode 13 return echoes that of her mother in the series’ second episode, which in turn started Riko’s journey with Lyza’s white whistle and letter to her daughter. Petals of eternal fortune flowers, Lyza’s favorites, flutter through the air as Riko’s balloon reaches the surface, much like the flower petals and confetti that celebrated Lyza’s own return. In the world of Made In Abyss, Lyza’s return means that she has gone to depths from which she cannot physically ascend and remain human, even with all of her strength and cave-delving prowess. Her whistle is returned to the city as a symbol of her achievements and last dive.

-Pruschka, Made in Abyss: Dawn of the Deep Soul

Made In Abyss: Dawn of the Deep Soul picks up immediately where the anime left off (alternatively, where the second Made in Abyss compilation movie ended). Riko, Reg, and Nanachi descend through the rest of the fourth layer, the Goblet of Giants, to reach the eternal fortune flower field just above the fifth layer (aptly-named the Sea of Corpses) that Lyza loved.

Throughout Riko’s journey further into the Abyss, the flower field, and the eternal fortune flowers themselves, have been a visual motif of Lyza. As viewers, we knew that Riko wasn’t going to physically meet Lyza here, but there was still a sense that she would receive a small piece of closure if not another clue as to her mother’s whereabouts or current state.

Instead, the field is burned due to a bug infestation and Riko is there for mere minutes before she watches her mother’s favorite place go up in flames. It’s the beginning of an important narrative threshold that Riko must cross in order to go on her own last dive: the separation of her own desires and the presumed ones of her mother Lyza. 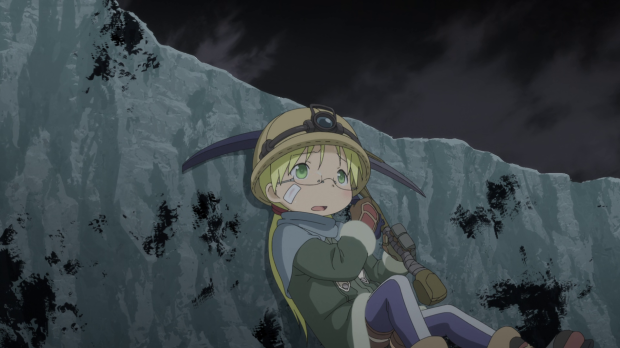 Riko receives her mother’s signature relic: Blaze Reap, which she later uses directly in combat, ultimately with little success (although this is not Riko’s fault and is because of what Bondrewd is). When compared to Lyza physically, Riko has always been found lacking due to the circumstances of her birth. Lyza gave birth to her in the Abyss and Riko still suffers a few complications from it including poor eyesight and a general lack of physical strength even when not compared to the monstrous strength of her mother.

Yet Riko’s talents lie elsewhere, and in Dawn of the Deep, those talents are made apparent once again due to her relationship with Pruschka. Pruschka’s sacrifice becomes the key for Riko to continue her journey, albeit at a cost that Riko never would have asked for. This happens after an important conversation between Riko and Pruschka where Riko admits that she started the journey to find her mother, but that’s now secondary to her own curiosity and call to the Abyss. Pruschka points out that this too is a way that Riko can be with her mother, even in Lyza’s physical absence.

Lyza’s whistle may have brought Riko to the Idofront platform in the Sea of Corpses, preparing for her final dive, but it’s Pruschka and the white whistle Riko has earned — again I feel the need to stress that Riko never would have chosen advancing in the Abyss over Pruschka’s life — that allow her to cross that final threshold. Riko has already had her own small return with her balloon message, she’s found her own path that runs parallel to Lyza’s but is one that Riko chose for herself in Dawn of the Deep, and has now taken her last dive, past the true point of no return.