Although Neiru Aonuma has been a constant of Wonder Egg Priority since the series’ second episode, she’s rarely been a series focal point. Rika Kawai and Momoe Sawaki each received their own introductory episodes that revealed their personal reasons for fighting as backdrops for Ai Ohto (the default protagonist of the series to this point).

Meanwhile Neiru has quietly been at Ai’s side the entire time. They meet at the end of the first episode after Ai has her “one free roll” so to speak and Ai immediately tries to reach out to her with mixed results. By the end of the second episode, they’re friends — a reflection of Ai’s desire to foster genuine friendships and a continuation of the relationship she builds with Minami Suzuhara, the egg girl or captured maiden of that week. Neiru is used as both a foil to Ai and the person to whom Ai grows closest as the series progresses. Presented as someone who rarely allows people to affect her emotionally, Neiru allows Ai to see more of her than Neiru’s personality would initially suggest, reflecting both of their loneliness.

When Neiru first meets Ai, she’s gathering multiple eggs from the gachapon in the garden and stuffing them into her rolling suitcase. Setting the precedent of flowers being used to introduce and frame the four fighting girls in Wonder Egg Priority, there are colorful daisies at her feet. Daisies mean faith in Japanese flower language, but can also mean hope, renewal, or the ability to keep a secret in western or Victorian-era floriography.

If we’re continuing to use gacha terms to frame the system in Wonder Egg Priority, Neiru would be the series’ whale. This facet of Neiru’s character is introduced in the first episode and becomes increasingly important when considering how each girl fits within the system.

Neiru is frequently presented alongside Ai for direct comparison and insight into Ai’s character or well-being. Here, the sunflowers represent Ai, but they also show who Ai will become to Neiru as a friend: someone like a sunflower with all of the passionate love, brilliance, and radiance that its meaning suggests. As Neiru tells Ai in the series’ fourth episode, Ai is too trusting of other people, but she’s lovely for being that way. There’s a sense that Neiru truly appreciates not only Ai’s friendship but who Ai is in her most genuine moments — once the pressures that surround them subside and they’re simply allowed to be friends together. 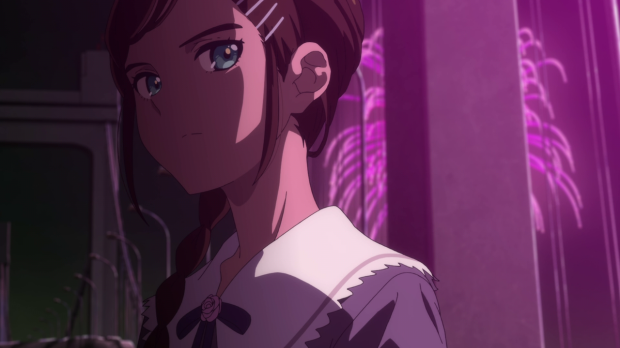 There are a few visual nods to Naoko Yamada’s directorial style in Wonder Egg Priority‘s fifth episode, Neiru’s focus episode, but none struck me as much as the use of fireworks over the bridge in Neiru’s dreamworld.

In Yamada’s adaptation of A Silent Voice, fireworks are the first “flower” — firework or hanabi is literally fire flower — shown in the series as one of the main characters is about to kill himself. A firework goes off in the distance and interrupts him. Later, when another character attempts suicide, fireworks sound in the distance.

For Neiru in Wonder Egg Priority fireworks go off every time she vanquishes someone’s wonder killer. Her otherworldly setting is the bridge where her sister killed herself (another possible visual nod to A Silent Voice or just Yamada in general from episode director Shinichirou Ushijima) and illuminate a field of funeral flowers in front of her sister’s statue.

Two specific flowers frame Neiru in the garden in this episode. First what appear to be white lilacs  behind her feet (which are also shown in the flower field with her sister) as she describes why she can’t opt out of the system to the other girls. Like many white flowers, white lilacs represent a purity or innocence but one specifically dealing with childhood. Neiru steps into her shoes with white lilacs in the background as she explains that her sister stabbed her before jumping off of a bridge.

In the second episode, Neiru tells Ai that she’s different, that she’s not doing this to absolve herself from guilt like Ai is. We don’t yet know how much to trust Neiru as a narrator to her own life — that’s not to say that she’s an untrustworthy person, but that in a series like this these girls are likely to be unreliable narrators — but she does appear to be fighting to solve the puzzle of her sister rather than the overwhelming sense of guilt that permeates the actions of the other three.

The second are lilies of the valley, which in Japanese flower language can simply mean sweet, or a promise of happiness. Due to their poisonous nature (and use as an actual poison) they can also mean sadness, pain, or loss after a death in western flower language. Both of these meanings apply here as after their heavy conversation in the garden, Neiru finds herself separated from the other three girls. Neiru likely feels the loss of their friendship (especially Ai’s friendship) wholeheartedly but this could also be seen as a promise that their bond will be mended eventually.

As for the separation itself, it’s no coincidence that Neiru is in the highest economic standing of the four and also the one least likely to opt out. Similarly, although Rika’s actions and communication skills are often suspect, it also makes sense that as the poorest member of the group, she would be the first to question the system. Again, I don’t think this is an indictment of Neiru or anyone else, but yet another nod from Wonder Egg Priority of how these things affect and influence people.