From it’s opening act, it was clear that Shoujo ☆ Kageki Revue Starlight had something to say about the stage — what young women give to it, what they receive from it, all wrapped up in a Takarazuka package. Karen Aijou has what is quickly revealed to be an impossible dream in Takarazuka: to occupy position zero, center stage, with her friend Hikari Kagura. Seisho Music Academy and its enigmatic giraffe host naturally guide her down the traditional path of fighting others for the top star position, pitting Karen and her classmates against one another in seemingly inevitable conflict.

That is, until Karen breaks the cycle and shatters the status quo, dragging Hikari and their other classmates with her. Laying the groundwork for Karen and Hikari are Claudine Saijou and Maya Tendou.

END_OF_DOCUMENT_TOKEN_TO_BE_REPLACED 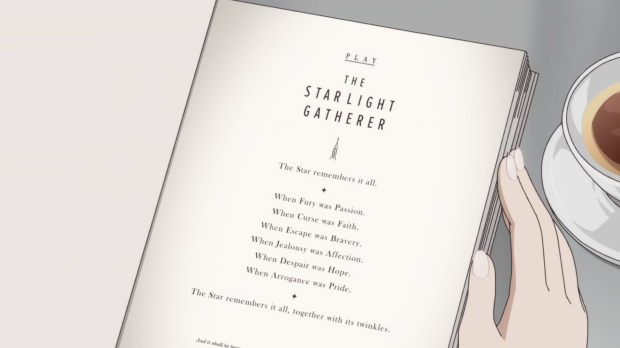 “Starlight. This is the story of a distant planet from long ago, in the faraway future.”

Compelling and captivating are two words used frequently in Shoujo ☆ Kageki Revue Starlight to describe the in-universe play and narrative framing device, Starlight. Following the star-crossed Flora and Claire, Starlight is a tragedy that borrows from known Takarazuka Revue staples like Elisabeth — ai to shi no rondo (Elisabeth — rondo of love and death) and is made to have the same influence and frequency of performance as Elisabeth or Rose of Versailles in order to frame the relationship of Revue Starlight leads Karen Aijou and Hikari Kagura. Starlight is synonymous with being a stage girl.

Karen and Hikari were inspired to become stage girls — effectively entering the spartan and highly-controlled education system of a Takarazuka trainee — by a performance of Starlight. Throughout the series, they frequently open episodes with narration from the play, reiterating how the story of Claire and Flora draws them in and captivates them and also that this tale is ultimately a tragedy. These two leads are torn apart once they reach for their distant star. Starlight not only encapsulates the stage girl experience but within it’s narrative, perpetuates the toxic cycle that Karen aims to break.

END_OF_DOCUMENT_TOKEN_TO_BE_REPLACED “Those who cannot wake up in the morning. Those who are content standing on the sidelines. Those people will never be called upon.”

The next phrase out of the giraffe’s mouth is, “Well then, I must ask you to leave.” Yet as he says this, Karen has already climbed all the way up his neck. She uses it as a slide in order to crash the revue duels and save childhood friend Hikari Kagura. This is who Karen is. And it’s this personality that makes her the perfect person to break the cycle. She doesn’t fit the Takarazuka Revue mold.

END_OF_DOCUMENT_TOKEN_TO_BE_REPLACED 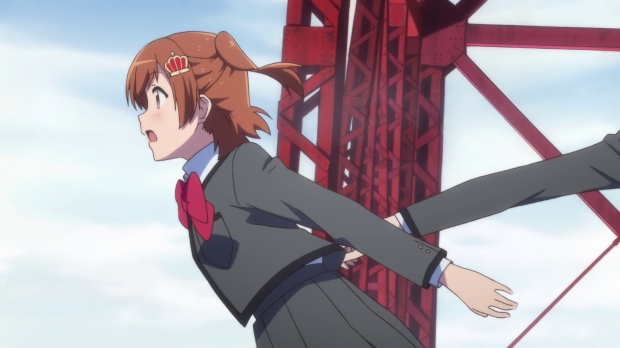 Hikari Kagura’s purported Episode 10 betrayal of childhood friend Karen Aijou is shown in Shoujo ☆ Kageki Revue Starlight‘s first episode. Not foreshadowed, straight up shown, albeit in a dream. From the opening moments of the first episode — when various members of the class introduce themselves around position zero — to the revue duet and Hikari’s rumored heel turn, Karen and Hikari’s relationship is laid out for us visually via cinematography and staging. Hikari’s actions in Episode 10 aren’t shocking, especially with the road she (and Karen) traveled to that final dueling stage.

Once again, it has a lot to do with the series’ incisive look at the Takarazuka Revue.

(The following post will quickly review but also assume knowledge of the sacrifices a musumeyaku is expected to make for their otokoyaku partner in Takarazuka, which was covered in part one of this week’s Revue Starlight coverage.)

END_OF_DOCUMENT_TOKEN_TO_BE_REPLACED

Throughout all of Shoujo ☆ Kageki Revue Starlight, we never see Claudine Saijou’s dueling stage. There are glimpses of it when Mahiru Tsuyuzaki’s performance crashes through several other revues, but Claudine doesn’t introduce her stage. She doesn’t receive a standalone episode — for all of the talk that the show does Mahiru dirty, at least she receives her own spotlight episode and somewhat cathartic revue — and is all too often shown in relief to Maya Tendou. Even when Claudine is separate from Maya, her dedication to becoming a stage girl is irrevocably tied to Maya or she is put in a position to support someone else (namely Futaba Isurugi after Futaba fights with Kaoruko Hanayagi).

None of this is a coincidence and it all revolves around critiquing the Takarazuka Revue.