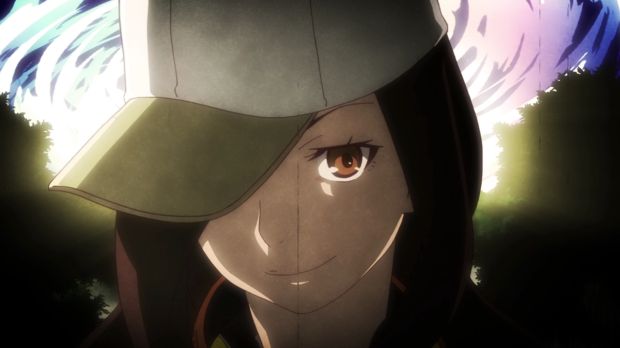 When examining the Monogatari series’ usage of color, no other arc exemplifies the franchise’s attention to detail quite like Owarimonogatari‘s Shinobu Mail.

Not only does this particular narrative arc showcase specific color patterns within the first episode, but it also gives Izuko Gaen ample screen time, further demonstrating what color can tell us alongside character dialogue and key plot points. Prepped to pay attention to the series’ use of color thanks to the first episode of Shinobu Mail, Gaen’s near-permanent rainbow-tinged sky speaks volumes.

As an aside, I don’t usually post spoiler warnings, but the final few paragraphs of this piece include major spoilers through Koyomimonogatari.

END_OF_DOCUMENT_TOKEN_TO_BE_REPLACED

“At our three-year high school with two hundred students in each grade, you end up sharing a living space with about a thousand people in all during your stay if you include the graduating and incoming classes and the faculty. Start wondering how many of those people mean anything to you, and the answer is going to be bleak for just about anyone.”

The Monogatari series — both in the light novels and the anime — is known for its verbosity. This is why the Kizumonogatari movies were so novel to me. Nearly all of their storytelling was done visually, removing the Koyomi Araragi monologues and narration that define the Monogatari series. Hiroshi Kamiya’s voice permeates the series, and even later installments of Monogatari Series: Second Season feature monologues from the series’ beloved heroines.

END_OF_DOCUMENT_TOKEN_TO_BE_REPLACED

Part of me wishes that I could erase my memory of the Monogatari series completely, and watch Kizumonogatari Part 1: Tekketsu with fresh eyes.

I wonder what I would see. How I would interpret the visual feast that the film provides. If I would have fallen in love with the film as I did with the series in 2009 when I watched Hitagi Senjougahara fall into Koyomi Araragi’s arms, his inner monologue a constant accompaniment.

END_OF_DOCUMENT_TOKEN_TO_BE_REPLACED

One of the Monogatari series’ greatest strengths is its inadherence to chronology. It often eschews placing events in chronological order to focus on a particular emotional narrative or relationship. The anime adaptation plays with this visually, revealing tidbits in background details that further inform viewers upon rewatching the series as a whole.

Koyomimonogatari is a series of short, seemingly frivolous episodes tertiary to the main storyline. They’re short diversions that span the length of what Monogatari arcs have aired, plopping the viewer into the center of that specific timeframe before jumping ahead to the middle of the next narrative arc. Chronology is usually discarded by the Monogatari series, but it has a deliberate role in Koyomimonogatari.

END_OF_DOCUMENT_TOKEN_TO_BE_REPLACED

This is the exact amount of time that the opening moments of the first episode of Bakemonogatari goes without lead Koyomi Araragi speaking a word.

“A better decision than dodging, wasn’t it?”

The first words out of Hiroshi Kamiya’s mouth as Araragi form this question, followed by an immediate and unsure retraction that devolves into a constant stream of Araragi’s innermost thoughts.

Upon revisiting the first episode of the series — going by initial airdate, not chronology or any other measurement — I was shocked to find that he went this long without speaking. Araragi’s voice is synonymous with the Monogatari franchise at this point. His monologues long-winded, his conversations unnaturally verbose — Kamiya’s specific Araragi tone is etched in every viewer’s mind who has watched Bakemonogatari or other parts of the series. When I picked up the Kizumonogatari novel, I somehow heard Kamiya’s voice in my head, despite reading it in English, not Japanese.