The short answer is, a local idol of Asakusa in Sarazanmai. The longer answer could relate to a kappa’s head dish (sara) and director Kunihiko Ikuhara’s penchant for Greek choruses.

END_OF_DOCUMENT_TOKEN_TO_BE_REPLACED

“You really don’t know what happened, do you? It doesn’t matter. By all means, stay in this cozy coffin of yours and continue to play prince.”

Each Kunihiko Ikuhara series begins with a system, and the system always remains, even at the series’ end.

END_OF_DOCUMENT_TOKEN_TO_BE_REPLACED 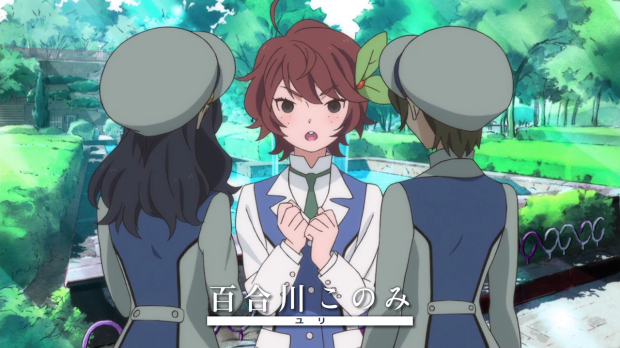 END_OF_DOCUMENT_TOKEN_TO_BE_REPLACED

Captain Earth reunites two Sailor Moon veterans, Takuya Igarashi and Yoji Enokido, with the former overseeing the series’ direction and the latter the series’ composer. Both are well-known names hailing from the “Kunihiko Ikuhara tree,” Ikuhara having had a hand in Sailor Moon‘s direction since the first season before leaving following Sailor Moon SuperS in 1996 to direct Revolutionary Girl Utena in 1997. Igarashi stayed on with Toei Animation to direct the final, and my personal favorite, season of Sailor Moon: SailorStars, while Enokido wrote Revolutionary Girl Utena, which was directed by Ikuhara.  Igarashi and Enokido were reunited in 2006 by Ouran High School Host Club, and most recently, the two worked on Star Driver, again as director and series composer respectively.

As their latest offering, Captain Earth has trappings of series past, in addition to leaning heavily on repetition to provide a narrative framework for protagonist Daichi Manatsu. It reeks of Igarashi, Enokido, and Ikuhara in style. Additionally, the series is dripping with sexuality.

END_OF_DOCUMENT_TOKEN_TO_BE_REPLACED 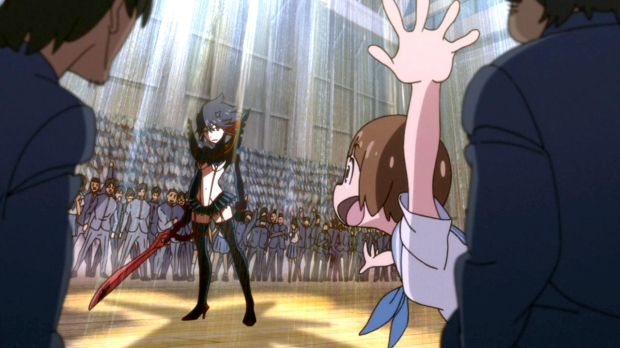 There’s something a bit off about Mako Mankanshoku.

The universe of Kill la Kill takes care in setting its presentation as a stage. Everything appears, six episodes into the performance, to follow a set script. Due to the death of her father, Ryuko Matoi is given a reason for arriving on the stage of Honnouji Academy, and her entrance additionally provides her the means, through Senketsu, to discover what she wants to know. To uncover her father’s mysterious past and the truth behind his demise, she must go through a series of weekly challenges by battling various members of the student body. If this sounds vaguely familiar, then you may have watched Revolutionary Girl Utena, which Kill la Kill is both influenced by and refers to directly. In turn, Revolutionary Girl Utena borrows heavily from classical theater and The Takarazuka Revue (a Japanese, all-female, performance troupe) in both visual presentation and direction. One of the more obvious theatrical elements present in Revolutionary Girl Utena is the inclusion of a Greek chorus in the form of the Shadow Girls, who appear once an episode to act out a parable through silhouettes and shadows.