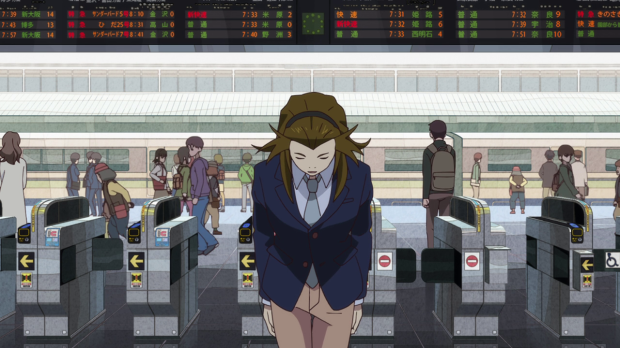 “I, Shimogamo Yajirou, hope to return from this journey a bigger man than I am now.”

-Yajirou Shimogamo to his family, The Eccentric Family 2, Episode 9

END_OF_DOCUMENT_TOKEN_TO_BE_REPLACED

Supernatural stories at their finest ensure that — no matter how grand of a spectacle their conflicts become — they never stray away from intimate experiences with which their audience can resonate.

For example, one of the most affecting scenes in The Eccentric Family is that of an eldest brother holding up a smartphone to the ear of one of his younger brothers, a brother that just happens to be a frog. Visually, it’s ridiculous. Emotionally, it has the power to move a viewer’s heart, becoming an iconic image.

In its first season, The Eccentric Family started big before focusing on the personal struggles and triumphs of one tanuki family. This allowed the second season to immediately narrow its focus with a personal anecdote, then cast a wider net, capturing a few more conflicts before honing in on the personal once more. The problems and warmth of the Shimogamo family remain in the background — including a wonderful scene where Tousen, now the Shimogamo matriarch, visits her elderly mother — but the series has now shifted to include the devilish human trickster Tenmaya, and Professor Akadama’s (tengu Yakushibo Nyoigatake’s) estranged son Nidaime (Junior).

END_OF_DOCUMENT_TOKEN_TO_BE_REPLACED

“Humans live in the city, tanuki crawl the earth, and tengu fly through the air. Since the city’s establishment humans, tanuki, and tengu have maintained a delicate balance. That’s what keeps the great wheel of this city turning round and round. And watching that wheel spin is more fun than anything else.”

This monologue from tanuki Yasaburo Shimogamo opens the first season of The Eccentric Family. After a season turmoil, warmth, forgiveness, and love, these words close the season as well.

The first episode of The Eccentric Family‘s second season eschews Yasaburo’s monologue about the hierarchy of tengu, tanuki, and humans in Kyoto. It wasn’t at all what I had expected.

But it was more affecting.

END_OF_DOCUMENT_TOKEN_TO_BE_REPLACED

Sisters, sisters
There were never such devoted sisters,
Never had to have a chaperone, no sir,
I’m there to keep my eye on her
Caring, sharing
Every little thing that we are wearing
When a certain gentleman arrived from Rome
She wore the dress, and I stayed home

Having grown up with only a younger brother, I can only imagine what having a sister (older or younger) would be like. In spite of this, there’s something incredibly resonant about the familial relationships portrayed in Galilei Donna. On the run from the powerful Adni Moon Company, the three Ferrari sisters participate in a plot that is similar to The Da Vinci Code in its convoluted nature, focus on blood descendents, and apparent scientific errors. However, if one can set all that aside – or enjoy it thoroughly in its ridiculousness – Galilei Donna offers its viewer a lovely portrait of three sisters, each struggling to find their individual roles both within their immediate family and in the world beyond it.

END_OF_DOCUMENT_TOKEN_TO_BE_REPLACED

Growing up, my brother and I were close friends. This was borne of necessity as, for a few years, we were the only children close in age in our neighborhood. As we grew older, other families with children our age moved in; however, my brother and I remained close. Often, both our friends and their parents would comment on how rarely we fought compared to themselves, or their children, respectively. To anyone who met us, we appeared to have a fantastic brother-sister relationship. The reality was often far different than the image.

Uchouten Kazoku surprised me with how well it portrayed subtle familial emotions and relationships within the Shimogamo Family. Opening with the various ways that four brothers, and their mother, are attempting to deal with their father’s death the series – in spite of turns to the dramatic – takes great pains to show the complexity that can accompany one’s feelings for their family members.