Was this post inspired solely by the fact that Tuxedo Mask has an attack in the manga called “la smoking bomber” and reading way too far into that?

END_OF_DOCUMENT_TOKEN_TO_BE_REPLACED 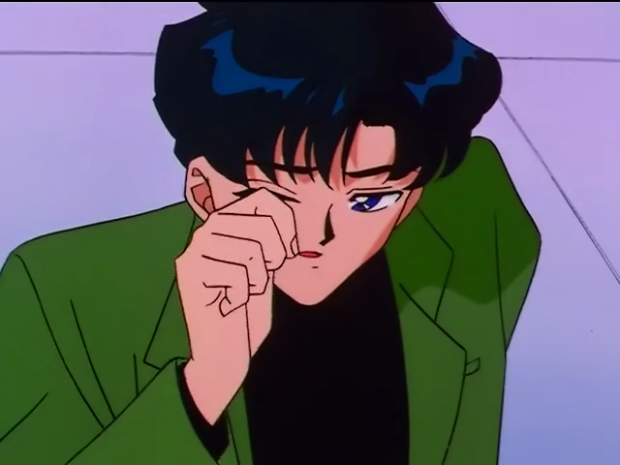 Pour one out for Mamoru Chiba’s eye.

Last year, I began a full and complete rewatch of one of my favorite anime series, Sailor Moon. This year, I finally finished it.

I’ve previously waxed poetic on why I love Sailor Stars despite it being a bit of a disjointed mess. I’ve also written about how it’s inspired other anime visually — like the blocking of the Puella Magi Madoka Magica finale. This post isn’t about that.

Instead, it’s about another facet of why Sailor Stars is my favorite Sailor Moon season. Outside of the typical factors we use when rating anime — sensible things like animation quality, production, narrative coherency, overarching themes and symbolism — the circumstances and context of how we watched it and who with frame our emotional attachment. Nostalgia is a powerful feeling, and no other anime season inspires it in me quite like Sailor Stars due to how ridiculously difficult it was for me to watch it.

END_OF_DOCUMENT_TOKEN_TO_BE_REPLACED

Before ubiquitous personality tests sorted people into houses belonging to a certain British magical boarding school, there was still anime. Sailor Moon used established, color-coded sentai archetypes and applied them to its five heroines of the first season as shortcuts for their personalities, or even slight variations on the established sentai status quo.

Like any Sailor Moon fan growing up in the early 2000s, I wanted to be like the sailor soldiers, but I wasn’t an Usagi. If anything, I was probably an Ami, stashing books under my pillow at night, keeping my nightlight on because I was “afraid of the dark” and waiting until the final light was flicked off out in the hallway to read books when I was supposed to be sleeping. In my dreary days stuck at home with pneumonia, I wished to be Hotaru, with the dark power of ending the world in my chuunibyou hands.

Usagi, despite her many flaws, was someone who I wanted to be — kind, gregarious, and with a natural ability to make friends. I valued Usagi’s personality more with each passing episode, until impassioned words from those closest to her brought the true value of her love for others into sharper focus, something I could then express into words. Even if I didn’t know how to make friends or keep friends myself, here was a roadmap of how it should look like, what caring for a friend, especially other young women, could look like.

Ami, I identified with. Usagi was a goal. Makoto — Lita, since I was on a strict diet of the English dub until I was allowed freer reign on the internet — was cool, someone who I wanted to be with, if I was being completely honest with myself at the time (I wasn’t). Minako, or Mina, was someone I admired. I ignored Rei, thinking at times that she was too perfect and overly mean to Usagi for no reason.

Now rewatching the entire first season of Sailor Moon for the first time, Rei Hino/Sailor Mars is now one of my favorite characters in the entire franchise.

END_OF_DOCUMENT_TOKEN_TO_BE_REPLACED

Near and dear to my heart, the Sailor Moon franchise is something that means a lot to me personally. I know I’m not alone in this, and my story isn’t particularly special. Sailor Moon resonates with an enormous amount of people, making it one of the most well-known anime franchises both in Japan and the west.

Upon watching the first episode of Sailor Moon Crystal back in July 2014, I was ecstatic. While there were recognizable problems — primarily with the translation of Naoko Takeuchi’s character designs from the manga into animation — I overlooked them. Sailor Moon was back, with a promise to follow the manga more closely than its first anime iteration. My initial reaction was one fueled by nostalgia and emotional resonance.

As the weeks passed, poorly animated scenes, weak cinematography, and a general sense of laziness permeated Sailor Moon Crystal‘s presentation. Their schedule of one episode every two weeks made such glaring visual mistakes unforgivable in the eyes of the community. For me personally, Sailor Moon Crystal just made me sad to see a property that I cared about so much fail so miserably in creating any sort of resonance with me beyond my initial, rose-colored nostalgia glasses. After sticking with the first season for longer than I probably should have, I dropped the series.