The other day, one of my coworkers posited that one’s favorite moment or piece of media is almost always going to be one of your first big experience — something that ties you emotionally to that particular property. This isn’t a revolutionary statement by any means, and while it didn’t apply to me in that moment I do agree with it more generally. Singin’ in the Rain is my favorite movie because I was struck by how Gene Kelly moved through space as a sick kid with pneumonia and nothing else to watch but old movies. I revisit things seasonally when they affected me first, which is why I’ve had the itch to rewatch Flip Flappers, Yuri!!! On Ice, and Arcane lately.

Similarly, there’s the urge to view other pieces of media through that same frame of reference that affected you emotionally or stood out to you in that moment (for better or for worse). Although I wouldn’t consider Durarara!! one of my favorite anime, there is one particular scene that has always stood out to me due to its visual and narrative execution. Since the moment I saw it back in March 2010, it has become a point of comparison to any anime attempting to do a similar narrative reveal. Now a very different but equally important reveal joins it as a relative of sorts in Odd Taxi.

Spoilers for the first season of Durarara!! and all of Odd Taxi.

There are so many things to love about Durarara!!‘s Dollars reveal, beginning with how the climactic moment starts with Mikado Ryuugamine holding his cell phone above his head like a dork as Namie Yagiri looks at him with bemused disgust.

The real brilliance of the Dollars unveiling is not that it’s the mild-mannered Mikado Ryuugamine at the helm of the largest gang in Ikebukuro, the so-called “colorless” — in comparison to the color gangs listed in the series like the Yellow Scarves or Blue Squares — but that it uses a visual conceit that most viewers will not have given any particular thought or notice. In Durarara!! background characters are grey blobs. Set in busy Ikebukuro, Durarara!! has to animate a large amount of background characters simply as part of the setting. While watching, I had assumed that the grey crowds were simple cost-cutting measures, designed to make things easier on the animators by not having to give passers-by all that much detail.

And, this is probably also true. Some of the best cost-cutting measures — look at any Kunihiko Ikuhara work — are also part of the story itself and this is where, in its eleventh episode, Durarara!! shines. 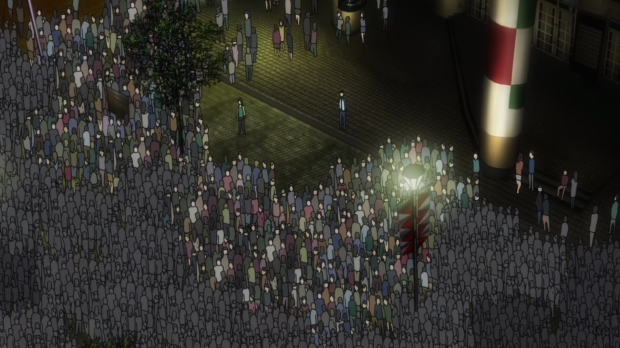 Seemingly cornered by Namie and her hired henchmen, Mikado sends out an admin message to the Dollars, a faceless and anonymous but wildly-popular online group. Prior to the message, Namie, Mikado, and Namie’s bodyguards are the only characters in these scenes who aren’t greyed-out. As phones begin to go off in the crowd, people are brought into the foreground with more distinct features and colorful outfits. They are still the colorless but they are a part of the Dollars, who now surround Namie, giving Mikado the upper hand.

It’s difficult to describe in writing the experience of watching this for the first time. I remember being awed at the execution more than I was interested in the concrete reveal of Mikado’s online self. The transformation of background characters into Mikado’s own, admittedly chaotic, Ikebukuro gang became a framework through which I viewed similar attempts at large unveilings in other media properties. 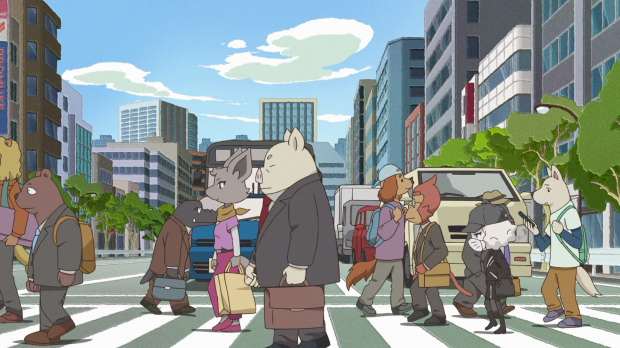 By contrast, Hiroshi Odokawa’s visual agnosia is treated less as a big reveal but more of a soft and meaningful part of his character. Odd Taxi hints several times throughout the series that it’s only Odokawa who sees everyone as animals — either through throwaway lines from Odokawa himself, or clever visual nods to the audience — but doesn’t concretely say as much until the final episode, when Odokawa’s doctor and friend, Ayumu Gouriki tells Miho Shirakawa when she asks.

Unlike Durarara!!, Odd Taxi‘s execution tells us that it’s less about what Odokawa has been seeing, but the effect that his childhood trauma has had on his life. The “big reveal” in the final episode isn’t that Odokawa had seen everyone as animals, but that this was specifically to overcome a traumatic and awful childhood.

When Odokawa’s mother plunges their car into the water, Odokawa not only survives, but begins to see people as animals instead. In his own words, “My relatives and teachers showed up and had serious conversations and told me all kinds of stuff, but I didn’t really mind. I met patients and nurses but it didn’t bother me at all. After all, they were pandas and beavers and tortoises and llamas and stuff.” Seeing other people as animals allowed Odokawa to actually talk to others without fear for the first time in his life.

Throughout Odd Taxi‘s run, we see Odokawa forming meaningful relationships, particularly with Shirakawa and Gouriki. When Odokawa is fished out of the water for a second time, he begins to see the world populated by humans again, no longer needing the aid of visual agnosia to connect with other people. Again, the important thing isn’t that Odokawa was seeing others as animals, but why. And when he finally sees the world as it is, what that says about how far he has come emotionally and mentally.

Both Odd Taxi and Durarara!! use the way in which an audience naturally views background characters to become part of the visual storytelling. When everyone in Ikebukuro is greyed-out save the main characters, it’s shocking when they all appear in vibrant colors in a crucial climax of the season. When everyone is an animal in Odd Taxi, characters fade into the background and then are pulled forward when needed. Odd Taxi also does this aurally, by weaving in the stories of Mystery Kiss and the Homosapiens manzai duo, both of whom are first heard in Odokawa’s taxi cab as background noise.

Odd Taxi‘s finesse in how it slowly ties up some (but importantly not all) of its loose ends is also exemplified by how it reveals every character that we’ve come to view as animals in their human forms, now that Odokawa sees the world differently. We see exactly how Odokawa characterized Yano as a porcupine or Gouriki as a gorilla or Shirakawa as an alpaca. It’s like an odd puzzle game where we finally see the answer and realize that Odd Taxi had also given us information that Odokawa or other characters didn’t have, allowing us to piece together some of that puzzle ourselves if we kept track of the animals presented.

While I’ll likely always use Durarara!!‘s Dollars reveal as a point of reference, now it has a softer, even more meaningful sibling in Odd Taxi‘s final episode.