“Kids can’t choose the adults in their lives, least of all their parents. Ninamori’s father is the mayor of our town. I don’t really get it, but it must be hard for her.”

For others, FLCL resonated with them instantly. They saw themselves in Naota Nandaba, a confused 12 year-old boy on the cusp of adolescence surrounded by classmates, teenagers, and so-called adults all struggling with what it means to be mature. My own affinity for the Gainax staple that has since become near-required viewing in most anime circles bloomed late, much like my personal experience with fumbling my way through puberty.

While the majority of FLCL focuses almost singularly on the male experience of maturation, the OVA series’ third episode offers a welcome female perspective by contrast thanks to the full introduction and subsequent narrative of Eri Ninamori. A classmate of Nandaba, Ninamori appears to be everything he is not — mature, put together, and confident. However, much like the seaweed eyebrows of Commander Amarao, Ninamori is yet another example of someone attempting to act mature when they have their own mountain of unaddressed and seemingly insurmountable problems.

“I’m not worried. You seem to know how to handle yourself. You slept over last night, but put on a different suit for today.”

Much of Ninamori’s malcontent stems from her father — the holder of a highly-visible public office — and his affair with his secretary, who incidentally was not as adept at hiding the relationship as Ninamori gave her credit for in the opening moments of the episode. Ninamori’s high-and-mighty manipulative personality is presumably a byproduct of her parents and the social standing inadvertently forced upon her due to her father’s job. She attempts to speak like an adult rather than a child, and places herself above childish things, in spite of being prone to her own outbursts when things don’t go her way.

Ninamori assumes a role of authority and shoves her personal feelings aside in service of acting mature. No other scene in FLCL showcases a desperate attempt to play the role of an adult quite like Ninamori’s dinner with Nandaba and his family where she eats curry while repeatedly stating that her parents’ situation isn’t a big deal to her. She comes down with an acute stomachache towards the end of the dinner and ends up rushing to the bathroom — an action repeated throughout the episode when a character is unwilling to drop their false mask of maturity. 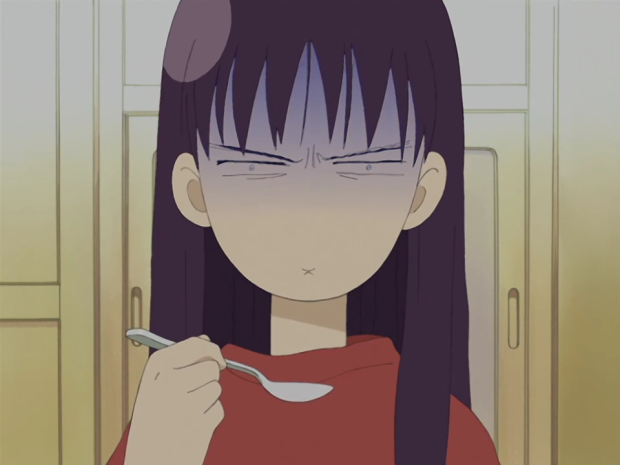 While the two series are obviously different, Space Patrol Luluco — of former Gainax animator Hiroyuki Imaishi by way of Studio Trigger — takes me back to this one Ninamori episode with its spot-on portrayal of adolescence. (It’s worth noting that Imaishi did work on FLCL, and was the assistant animation director to Shouji Saeki for Episode 3.) Ninamori is taught that her own desires are to be hidden from others, and her goals achieved through underhanded schemes rather than honesty. Additionally, her personal emotions are suppressed for being “childish” and she must wear the mask of normalcy while maintaining the status quo for the sake of others.

All the titular Luluco of Space Patrol Luluco wishes is to be normal. Placed in a similarly offbeat environment as FLCL‘s Mabase, Luluco finds herself pressed into intergalactic law enforcement when her father is accidentally frozen and unable to perform his civic duty. In the process, she is publicly embarrassed in front of her classmates — a young woman’s adolescent nightmare — and given both a dreamy love interest and a snarky rival-turned-friend.

Unlike Ninamori, Luluco is fairly honest with her emotions and desires, whether she means to express them to the world or not. This is a probable result of her bumbling and seemingly simple father’s influence. The series reveals that Luluco’s mother left the family when Luluco was young after constant parental infighting. Like Ninamori, Luluco cannot choose the adults in her life and her parents’ respective positions infringe on her dreams of going through puberty as normally as possible. 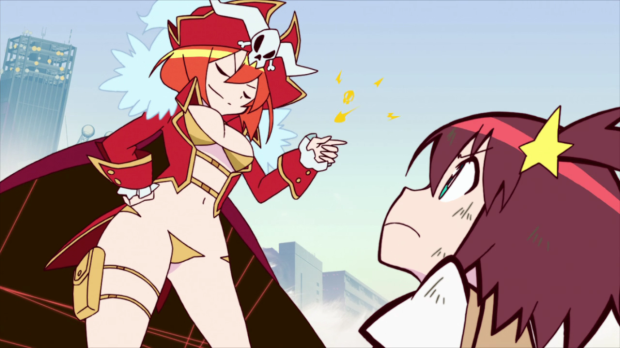 “Luluco. You’re still obsessed with being normal? You’ll never make it in this universe if you’ve got your head in the clouds.”

Mocked for her desire to be a normal adolescent girl by her exceptional mother, Luluco is faced with the reality of her parents’ relationship and their role in the development of Luluco’s own personality in the series’ fifth episode. Most of us won’t have a pirate mom who hijacks an entire city only to turn around and sell it on intergalactic eBay. Most of us won’t have a high-profile father who is caught in a public scandal. My own parents were very unassuming, but equally if not more embarrassing in my warped teenage mind while I was going through puberty. Parents are people that more often than not are muddling through how to be adults themselves while attempting to raise children.

No series gets this quite like FLCL, where all of the older, authority figures are just as confused and lost as kids like Nandaba and Ninamori; however, Luluco comes close with its straightforward and ultimately charming portrayal.