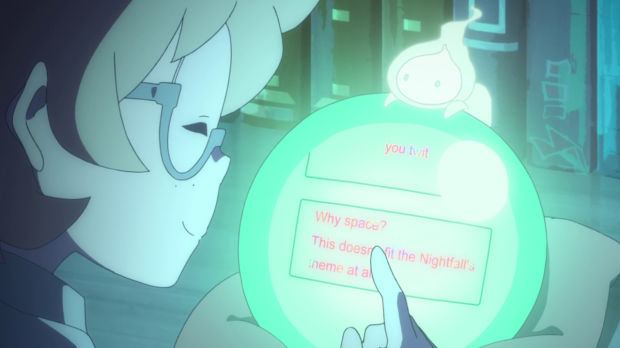 I loved Little Witch Academia in its entirety. It’s a series with interesting commentary on art, creation, and the anime industry as a whole, presented in a fun and fanciful package but no other episode is as complete and enjoyable to me than Episode 4, which follows Lotte Jansson and her love of the book series night fall.

Sincerity is difficult to come by sometimes. Fortunately, we have Little Witch Academia‘s Lotte to show us the way. 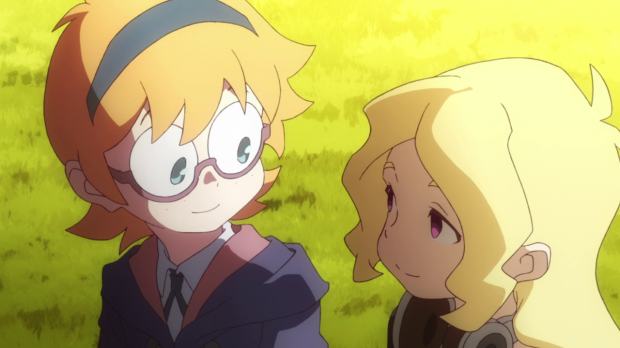 Lotte’s love of Twilight expy night fall is something that could have easily tread into the more dangerous waters of loving a piece of media unconditionally, willfully ignoring its flaws. Yet, Lotte appears aware of how the books are perceived — even if she didn’t, she would have Akko Kagari and Sucy Manbavaran’s confusion at the night fall phenomenon to remind her — but is content to geek out with other fans anyway. We see nods to Lotte’s continued love of night fall throughout Little Witch Academia, but night fall itself never becomes a defining characteristic of her being. Instead it’s Lotte’s genuine enjoyment of the series and her support of night fall author Annabel Creme that become her trademarks. This distinction is important.

Most of the episode focuses on Lotte and Akko’s different viewpoints on what it means to feel inspired by something or someone. Akko’s hero worship of Shiny Chariot has led her to want to become Chariot, whereas Lotte is content to support Annabel. Lotte doesn’t want to be Annabel, and this comes into play when the current Annabel (the latest in a long line of Annabels) quits over what ultimately are internet hate comments. Through a conversation where they both admit their respective attachment to the series, Lotte is able to inspire Annabel to continue writing.

I’m not someone who can “turn my brain off” when reading or watching something (as evidenced by this blog) and I don’t think this is a bad thing. I’m fairly content with how I personally engage with media — despite receiving my own internet hate comments — yet this episode still feels genuine to me in a way that few things are. Annabel is inspired to continue night fall not when she necessarily ignores negative commentary, but when she rediscovers her own love of the series that motivated her to write at all thanks to geeking out over it with Lotte. 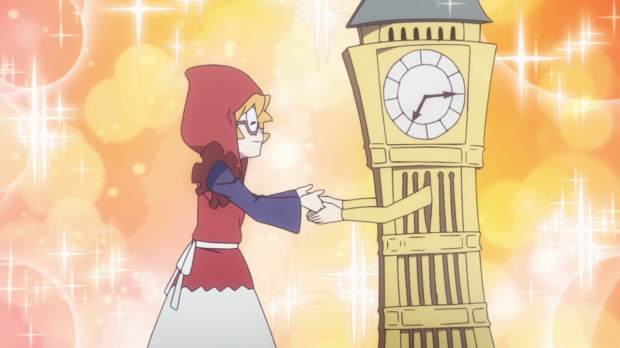 This episode is best summed up by Lotte’s interaction with a woman dressed as “the clock tower that Belle lived in when the series began.” Lotte fawns over her cosplay before asking to be friends. “You’re silly. We’re already friends,” the clock tower responds. Later, in a background visual gag, we discover that the clock tower is a teacher at Luna Nova, proving that the pull of night fall appeals to all ages.

For me, that’s what anime blogging and participating in the anime community is ultimately about and now, whenever I start feeling too cynical or caught up in my own thoughts, I have Lotte and the clock tower to remind me of that pure enjoyment.