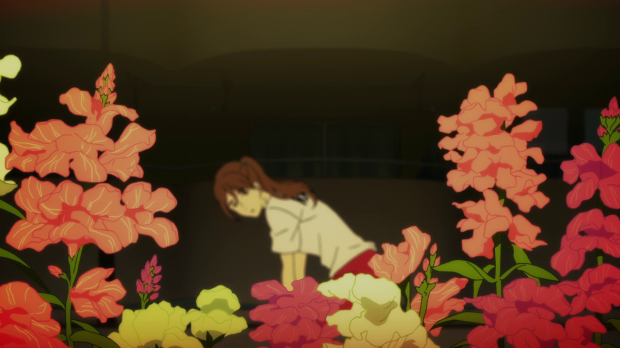 Like most things in Devilman Crybaby, its use of flowers is not subtle.

By nature, snapdragons are deceptive flowers. Their common name of snapdragon comes from the fact that the flowers look like small dragon heads that open their “mouths” when squeezed. When I was younger, my friends and I would play a game where we would squeeze snapdragon flowers, opening them. The first person to find a bug in theirs lost. One time, my friend was stung by a small bee.

Miki (Miko) Kuroda is a conflicted character. She resents Miki Makimura for her beauty and sprinting talent. As she tells Miki towards the end of the series, “I was always the best, but you took that away.” Miki Makimura was so good that she was able to keep her name, while Miki Kuroda was relegated to Miko, a nickname that continuously reminds her of second place. Even after becoming a devilman, Miko is unable to best Miki. She is never given the opportunity.

Devilman Crybaby surrounds Miko with colorful snapdragon flowers, in vivid reds, pinks, and yellows. They grow in planters around Miko’s apartment and she is shown frequently watering them. We later learn from rapper Mayuta that Miko planted these flowers herself and has been tending to them ever since.

These snapdragons, that come from Miko, tie into her conflicted nature. Known for both deviousness and graciousness, snapdragons have several incompatible meanings, which has also given them the additional meaning that everything is not as it seems. In Victorian-era flower language, the message of a snapdragon flower changed depending on the flowers with which it was paired. Miko loves and hates Miki. 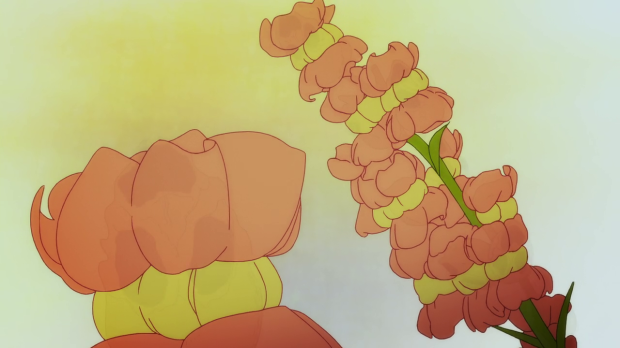 In the moments where Miko loses herself the most, the snapdragons also transform to small skulls on stalks. Devilman Crybaby is not subtle, and uses snapdragons to express Miko’s dueling emotions — which can then be applied to humanity as a whole within the series. It’s important that Miko ultimately swallows her pride and confesses to Miki. After all of her focused obsession, self-hatred, and jealousy, Miko still finds it in her heart to express love.

Although snapdragons are specifically tied to the story of Miko, they also appear in front of Silene and Kaim while they’re trying to track down Amon/Akira. Silene and Kaim are also devious and not what they seem to Akira due to his perception of demon and human. Kaim’s love of Silene and Silene’s feelings towards both Kaim and Amon become more of a focal point in Devilman Crybaby than Go Nagai’s original Devilman manga, and their interpersonal relationships a more complex backdrop for how Akira perceives demon, human, and devilman.

Silene is also pictured in front of a small planter of poinsettia flowers when trying to seduce Akira, who she only sees as her lost love Amon. Poinsettia flowers were representative of purity in Aztec culture, and became popular Christmas holiday gifts in the United States. In Christian tradition, the red leaves symbolize the blood of Jesus Christ, while the white flowers represent his purity.

As Ryo Asuka/Satan says, demons are pure in a way, and red poinsettias tie into Silene’s purity, although perhaps not in the way that Ryo thinks, given his own realization and love for Akira in the series finale.