The Victorian-era trappings of Violet Evergarden are no accident. Victorian Great Britain has, retroactively, become a divergence point in fiction where, if industry had advanced along this particular timeline rather than another, things would have been different. This, along with rich aesthetic trappings that accompany any economic boom in history, make it a much-desired setting, begetting the entire steampunk genre.

A key factor to keep in mind when evaluating steampunk as a fiction genre is the boom of 19th-century novelists — and the novel as a leisure activity in and of itself — that accompanied the Industrial Revolution. Charles Dickens, the Brontë sisters, William Thackeray, and Mary Anne Evans (George Eliot) are all products of this time period. After them came Jules Verne, H.G. Wells, and the scientific romance (later called scientific fiction, or sci-fi). Many works that are considered great or integral to understanding the development of western culture were written in or around the time of Queen Victoria. Since they are taught so often in schools, it’s easy to see how aspiring writers would want to take elements of these lush environments and somehow port them into a more modern era.

Not everyone can write in Violet Evergarden. This is an understated but important aspect of where Victorian culture and the novel frame the series’ narrative. It creates a barrier between those who can write, or even have access to someone writing for them, and those who cannot.

In the world of Violet Evergarden, Auto Memoir Dolls are tasked with writing everything from addresses to deeply personal and emotional letters. Although the word “doll” brings up images of a lifeless husk, Auto Memoir Dolls are expected to deftly translate human subtext. They are a tool for another human being to use, but also require human qualities like empathy and understanding in order to do their job well. Cattleya Baudelaire is the premier example of this.

Interpreting subtext as a person who hasn’t been raised to be an emotionless child soldier is already difficult. However, in the same episode that Violet is (rightfully) admonished for her direct letter that spits out a woman’s text at verbatim onto a page, we also see Erica Brown — who presumably does not have a similar background to Violet and showcases both sympathy and empathy towards her in this episode — struggling with her own ability to translate emotions into words on a page.

What does this have to do with the Victorian era again? Everything.

Of the high-profile novelists listed at the beginning of this post, four are women: Anne, Charlotte, and Emily Brontë and Mary Anne Evans. All of them first published their works under male pseudonyms in order to be taken seriously. Charles Dickens, one of the most prolific and popular writers of the era was also one of its loudest social critics. In his novels, he skewered the rising middle class for their dismissal of poverty, and challenged increasing stratification between economic classes. Thackeray also attacked high society in works like Vanity Fair. With the written word more accessible than ever, novels reached a fairly wide audience while also providing important social commentary. The subtext of these novels, and sometimes direct text, were important in communicating dissatisfaction with many of the Industrial Revolution’s byproducts as well as oft-oppressive morality and social mores.

When Violet calls her typewriter a weapon, Cattleya simply smiles and says that you could say it’s a weapon that allows working women to “fight” in their society. Again, the Victorian era was a time period of subtext, with more avenues than before to express one’s true feelings without saying them outright. 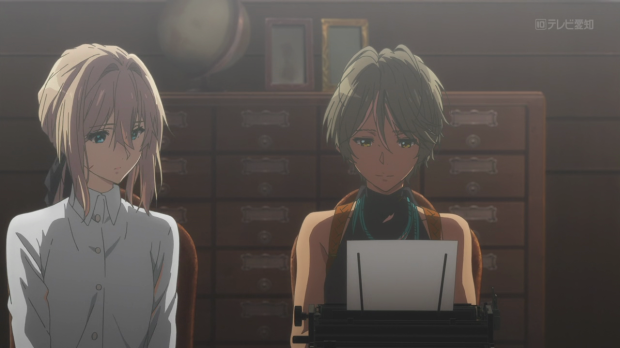 There is already subtext in Violet’s actions that we as viewers interpret immediately while she remains in the dark regarding her own feelings. Her first thought upon receiving a typewriter is to write her former commanding officer to let him know of her new assignment as an Auto Memoir Doll. We know that Violet’s letter is likely as dry and direct as the one she later writes for the woman who returns, irate and sad, because Violet couldn’t discern her true feelings. Yet, we also know that Violet’s status report to Major Gilbert Bougainvillea is her way of expressing that she cares for him deeply. We can already read the subtext that Violet cannot.

Lastly, if we’re meant to read between the lines in Violet Evergarden, Claudia Hodgins words towards the end of the episode are of particular note. He refuses to state outright that Gilbert is dead not only when he’s speaking to Violet, but to Cattleya. Claudia has multiple reasons to want to keep the truth from Violet, as she’s still learning to be a person. However, even with Cattleya, who appears as some sort of confidant for him, Claudia says, “He’s never coming back” either relying on her to read the subtext that Gilbert is actually dead, or hinting at another emotional or physical state that’s difficult to explain.